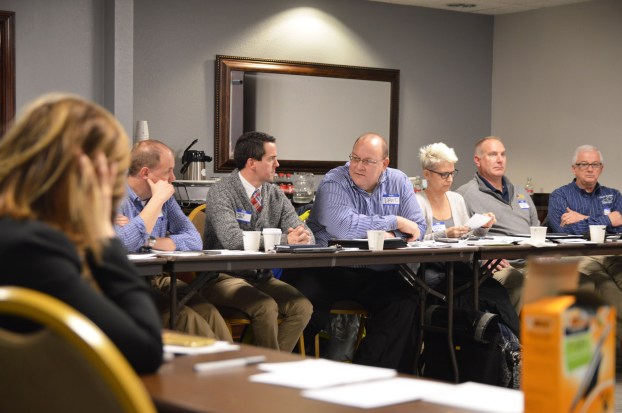 Editor’s note: This is the last of a two-part series on goals and objectives city leaders met to discuss during the annual City of Danville retreat.

Although city staff and officials toiled over a lengthy list of 55 goals after a brainstorming session last week during the annual city retreat, there were 11 that made the top of the list as doable objectives. The retreat is held in preparation for the budget-crunch time of year, where staff meets to discuss what the most important objectives are and ways to achieve them.

The meeting was held at Hampton Inn Thursday morning, and facilitated by a human resources consultant. The group of 21 consisted of all city department heads; the mayor and four city commissioners; as well as Convention and Visitors Bureau Director Jennifer Kirchner, Economic Development Partnership President and CEO Jody Lassister and local resident Wilma Brown, who were also invited to give their input.

Brown, a regular at city commission meetings, reiterated an issue she’s taken city officials to task over in the past. She said the salary schedules of city employees should be “realigned” due to what she considers some pretty vast disparities.

In May of 2019, when the city was assessing cost of living adjustment (COLA) raises for all city employees, Brown told the city commission then that when a 2% COLA is recommended based on individual salaries, it seems unfair since the lowest paid person in the city makes $24,000 a year, meaning they would only get a $480 raise.

She also pointed to the highest paid on the city’s list, which is the city manager’s salary — at that time “in excess of $130,000,” she said. However, Scott clarified back in May that the manager’s annual raise determined by the city commission is done “during the annual performance evaluation performed in December.”

After the list of goals was condensed and brainstormed further, as well as rated by the city commission based on importance, rebalancing salaries versus health insurance, realigning salary schedules and a review of the full compensation plan was a top vote-getter.

The group said figuring out “what the balance is” to attract and maintain employees, as well as streamlining the hiring process, is an important objective.

New City Manager David Milliron, sworn in during January, has already begun working on some new initiatives he considers good ways to retain employees, as well as create more of a team-like atmosphere.

“We have to find ways to get our employees around to meet everyone,” Coffey said.

Other discussions surrounded balancing out the health insurance offerings. Some said many younger people who are considering the city as a career aren’t as interested in insurance coverage as they are in making more in salary.

Milliron spoke of creating a more intense “onboarding” process, which is a human resources term describing the initial period when a new hire is assisted with understanding their performance expectations, as well as the social culture of their new job. Facilitator Randi Frank, an HR consultant, seconded how important that notion is in today’s workforce and said doing it right can lead to better retention.

The city recently received preliminary information back on a long-awaited compensation survey it hired a consulting firm to perform, but Milliron said it is still a working document and more research needs to be done. He has the objective as a top goal while he continues to do some research of his own as he’s settling into his new position.

Adjusting the pay of police and fire personnel is also listed as important within this category, as well as updating the employee handbook. 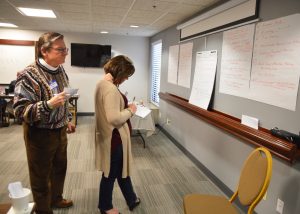 The group discussed creating a more “defined vision” for the city, and several commented on how the last “vision/mission” process involving city staff and the community was held decades ago, during Mayor John Bowling’s tenure. Coffey said he wasn’t sure if the plan had been looked at since then, and thought the idea should be revisited.

Various road issues were also brought up, with “finish streetscape plan for Main Street” landing in the top 11. City Engineer John Cassel said finishing up the plan for the area between Second and Fourth is a priority.

“We’re working on the process — what we’re going to put in there, the funding, the whole nine yards,” Cassel said. “… There’s a master plan that guides what goes into it.”

Some commissioners had already listed as a priority work needing to be done on some other area roads, and Coffey pointed out which ones are state roads that the city can’t do anything with.

Coffey said Gose Pike, which was listed as in need of help, is a city street, but that it’s tied into “the north-south connector plan.” Wilderness Road, which was also listed, is a state road, “and future funding for the east-west connector requires probably federal and state intervention” where funding is concerned.

Creating a transportation needs assessment plan was also top of the list of important items, to include focusing on not only needs of those visiting the area, but for cyclists and citizens.

A lengthy discussion was held about creating an aquatic and/or community center, which new Danville-Boyle County Parks and Recreation Director John Bell chimed in on. When asked about the aquatic center, Bell said his vision of such a center is different from what has been discussed and was defined as needed in the master plan.

“To me, what this community needs is much broader than that,” he said. Bell said the area needs a combined community/aquatic center, which includes a meeting center, a place “where children of all ages can go and find activities to fill interests and desires, whether that’s a dance class or an international food festival.”

The hypothetical idea was tossed out of the city acquiring the struggling Danville Country Club as a future community center. Mayor Mike Perros said it is no secret that the country club is currently trying to restructure to survive.

Some had “monitor country club” listed as an objective.

The group discussed how times have changed and families are pulled in so many different directions that country clubs are no longer a huge draw in attracting people to the area. But many said they hoped the club could find a way to reinvent itself in order to attract new members.

Perros pointed out the Bunny Davis pool is aging rapidly and continuously needs repair. He said at some point “in the foreseeable future, we are going to have to shut down the pool, right? Is there going to be any community access to any kind of pools, at that point?”

Bell said not unless another alternative is looked at. When some pressed him on the possibility of the city ever buying the country club, Bell said, “I have been approached, and that’s all I’ll say.” He said what the city would need to look at is “is it viable as a public facility, with all the offerings? … and the possible expansion that could take place in that area to accommodate additional parks & rec opportunities.”

“That’s not what we’re saying,” Bell said, while others said it should remain an option.

Milliron said it’s on the list, but “it’s spaghetti at the wall … there’s always options. The city’s role directly on the survivability (of the country club) is none. If the country club was to approach the governing body and seek options, or assistance or help, then certainly we would engage and throw spaghetti at the wall. We would be holding this meeting there right now if they weren’t in the middle of a remodeling.”

“So it’s a hot item or not a hot item?” facilitator Frank asked. 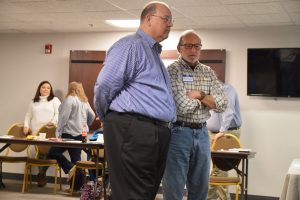 “The votes will decide,” Milliron said, then pointed out later that using the country club as a community center didn’t make the top 11 list after voting took place.

Creating more citizen-awareness of city services and more communication coming out of city hall also made the list, which included aspects of 911 and code enforcement. Rebranding and updating the city’s website was also included.

Although it didn’t make the list, one lengthy discussion entailed how the city can develop its relationship with the Transportation Cabinet’s District 7, which Mayor Perros has publicly toiled over during meetings.

Public Works Director Rick Henry said he felt the city needed to develop a better relationship with the state “on potholes; citizens don’t understand how we can’t fix them this afternoon” when they are on state roads, such as areas constantly complained about, like on Third and Main streets.

Milliron said in his past positions as city manager, he has always had “an annual meeting with DOT (Department of Transportation) folks.”

Coffey said that collectively, what city staff hears when they reach out to DOT is that the district hears from different groups quite often, which is oftentimes misleading, as if those groups are contacting the state on behalf of the city.

Police Chief Tony Gray said about five years ago, when the city and state attempted to move forward with the lane reduction of Main Street, “we had a big bungle” with four to five different groups identifying themselves to the state as representing Danville and bombarding it in opposition to the plan. He said the city needs to develop one group to speak on behalf of it, “and say this is what we want to see, instead of nine different groups.”

Coffey agreed with Gray, and said “making sure (the city’s) voice is consolidated into a single point” and bringing some discipline to the communication effort will prevent the city from undermining its own efforts.

Milliron said the list of objectives will be organized into a more cohesive list for further feedback, then once consensus is reached, “we will put forth for the commission to adopt.”

The city of Perryville has accepted an unusual gift — a new city hall building from Monticello Banking Company. The... read more