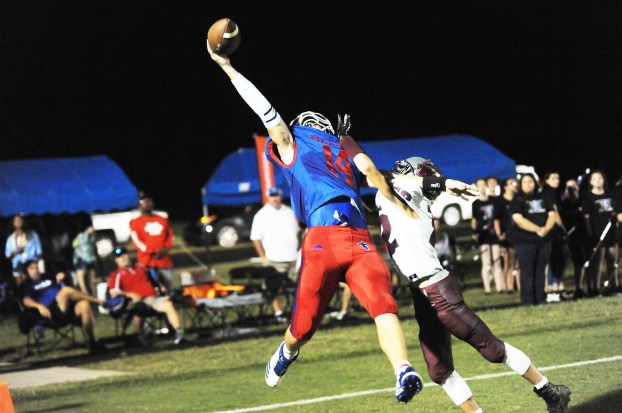 Part of high school football is having to retool after losing a handful of seniors. For Mercer County coach David Buchanan, he’ll have to replace at least three college athletes in Kaelin Drakeford (Eastern Illinois University), Malachi Yulee (University of Louisville) and Darrian Baker (Eastern Kentucky University) all signed letters of intent on National Signing Day.

Kaelin Drakeford might be one of the best pure athletes in the region — playing quarterback and safety for the Titans in football and being a double-double machine on the hardwood. And while EIU has produced NFL quarterbacks in Tony Romo and Jimmy Garapolo, Drakeford will be playing a different type of QB for the Panthers.

As a safety for Mercer last year, Drakeford had four interceptions and made 67 tackles. He also forced a fumble and recovered two. His combination of size, athleticism and leadership — Buchanan believes — is what drew EIU to him.

“I think the thing they like about him — outside of his character — they like his height, his football IQ and his athleticism,” he said. “They liked what they saw from his basketball. There’s a lot of carry over there and colleges like multisport guys and I think that’s really helped Kaelin.”

Malachi Yulee will be attending UofL as a preferred walk-on, but he has shown the skills to be able to make a difference for the Cardinals in his time there. 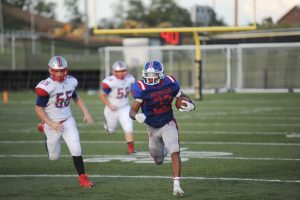 Malachi Yulee will be a preferred walk-on for UofL next year. (Photo Derek Brightwell)

Yulee had 928 yards and 14 touchdowns for Mercer last year for an average of 8.36 yards per carry and 1.3 touchdowns per game. He was the team leader in scoring and total yards from scrimmage.

“When Malachi is healthy and rolling — man he’s just a load. Gosh he’s good, Buchanan said. “The nice thing about him, too, is that he’s just a really great young man. They’re not going to have any problems with him. He’ll do super.”

Darrian Baker might not have had the stats of the other two — only one catch for 12 yards as a tight end and 42 tackles as a defensive end/linebacker — but his combination of size and athleticism is what makes Buchanan believe he might have the most potential.

“If he ever decides he wants to play inside on the offensive line, I think he can play on Sundays. He’s just a talented young man,” he said.

When Buchanan says the “sky’s the limit” for Baker, he might be speaking literally.

“If he doesn’t stop growing, he’s going to be about 6-foot-10 before he gets on campus. He’s still growing — he’s getting tall,” he joked.

“It says a lot about those young men, their position coaches and their teammates,” he said. “It’s definitely a sign of growth and improvement in our program… Getting college paid for is a pretty big deal.

“Sometimes you’ve got a combination of guys. This year — it turns out — we’ve got a group of guys who are good collegiately,” he continued. “Sometimes you have a lot of really good high school football players and that’s OK too. They’re going to be tough to replace, but I hope that every year we’re replacing really good players.”

It was a record-breaking day for the Boyle County swim team as it had automatic state qualifiers in seven of... read more