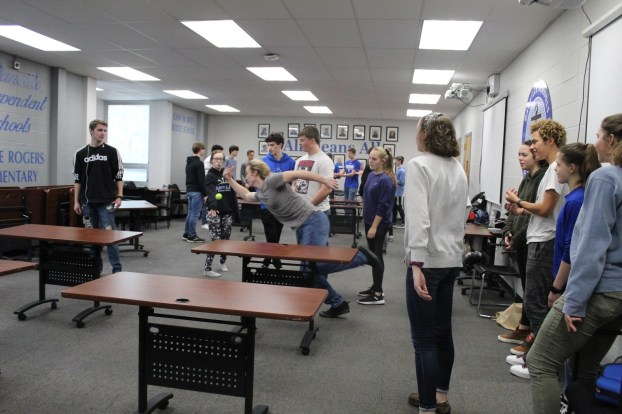 Students participate in a recent “All Hands on Deck” event at Danville High School. (Photo by Joseph Lay)

From Our Schools: Some aim to improve ‘All Hands on Deck’ initiative

The All Hands On Deck (AHoD) initiative is being promoted by the whole Positive Behavioral Interventions and Supports (PBIS) community, which includes Principal Thad Elmore, Mr. Kevin Bandura, Mrs. Beth Gooch, Mrs.Margaret Myers, and Mr.Ernest Dunn. The goal of AHoD, according to an earlier interview with Bandura, is to “reward students who are meeting benchmarks in behavior, grades and attendance.”

Jonathan Amrein, a senior at DHS, had a meeting on Tuesday, Jan. 14 to talk with Mr. Elmore about some concerns he had about AHoD.

He said, “I saw that there were things that we could do better with AHoD. I had heard from several of my peers that the schedule was odd and that, due to the shortened classes and the potential punishment for something out of their control, it was hard for them to even find a reason to come to school.”

He also said,  “We need to allow more time for class, as well as AHoD. The schedule was my main concern. Having such a chaotic schedule and then trying to fit a pep rally into it is a recipe for an unproductive day.”

Elmore said that when “I was hired, one of the things I was asked to do was to try and promote positive behavior and to get students to show up more.”

“So, during the summer, the staff sat down and brainstormed some ideas on how to do that was to have recognition for students who were doing the things they were supposed to be doing.” Elmore said that “some of the problems he saw of the first All Hands on Deck was student accountability and that I got some students that requested it be shortened because they felt it was too long of a period of time.”

Elmore said he is open to any ideas or changes on how to improve for AHoD and that anyone with ideas should talk to him.

The From Our Schools partnership gives journalism students from Boyle County and Danville high schools access to Advocate-Messenger staff expertise and provides space in the newspaper for student-produced content.

Boyle’s legislators down to help with Danville’s downtown safety

Safety in downtown Danville was a main topic of conversation during a “legislative coffee” town hall meeting at city hall... read more