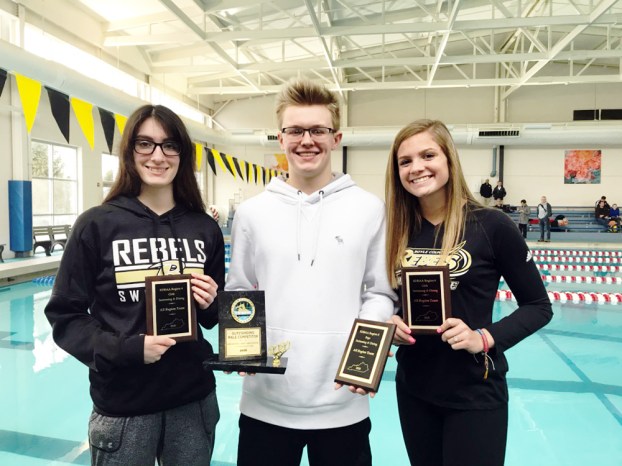 Cora Gilbert (left), Campbell Coyle and Riley Cerqueira were all named to the All-Region Team at this weekend’s region championships. Coyle was named Male Swimmer of the Meet. (Photo submitted)

It was a record-breaking day for the Boyle County swim team as it had automatic state qualifiers in seven of the eight relay events and four individual events. The Rebels also had three other individual swimmers qualify as at-large bids to the state tournament as well as the other relay team.

The boys 200-yard medley team of Creed Farthing, Corbin Coyle, Campbell Coyle and Clark Coyle broke the oldest school swimming record on the books — one set by the team of Alex Griffin, Aaron Raitiere, Derek Robinette and Kevin Freedman in 1998.

Cora Gilbert broke the Boyle record for the girls 100-yard breaststroke by three seconds — previously held by Natalie Hayes from 2016.

Gilbert and Campbell Coyle were joined by Riley Cerqueira on the All-Region Team and Coyle was named the boys swimmer of the meet, continuing a strong season by the junior.

While not finishing in the top two to earn an automatic bid to state, Creed Farthing’s time of 1:50.92 in the 200-yard freestyle was good enough to earn an at-large bid.

Cerqueira earned her spot in the state tournament as an individual swimmer in the 50-yard freestyle, finishing second behind West Jessamine’s Nara Lee. Gilbert finished close behind and earned an at-large bid. Campbell Coyle earned a spot in the state meet as well by winning the event by almost a full second.

Cerqueira earned a spot in another individual event — finishing second in the 100-yard freestyle and will be joined by Coyle who won in his crack at the event.

Creed Farthing qualified for state with a second place finish in the 100-yard backstroke, coming up just two hundredths of a second short of first place.

Gilbert’s record setting time of 1:10.67 was also good for first place in her try at the 100-yard breaststroke to get to state while Corbin Coyle missed qualifying automatically, but did get in as an at-large bid.

The boys 400-yard freestyle relay team of Farthing, Lockhart and Clark and Campbell Coyle punched their automatic ticket to state while the girls team of Fogle, Bean, Ella Grace Gover and Spencer will be there as an at-large bid.

Sophie Arnold was the fourth individual automatic qualifier in diving — finishing second with a combined score of 233.30.

Overall, Boyle County finished second as a team in the regional meet with a combined score of 749.5. The girls team (418.5) finished second and the boys team (331) finished third. North Oldham took first in both the boys and the girls, leading to their combined win.

It was a hectic, emotional and proud evening for the Danville and Boyle County wrestling programs. But mostly, it was... read more