The front page of the Sunday, Feb. 11, 1990, edition of The Advocate-Messenger contained two stories that greatly impacted Danville, Boyle County and the surrounding area.

Just two days prior, on Friday, Whirlpool Corporation made the stunning announcement that it was selling its Danville plant. The trash compactor and ice-maker operations were going to be moved to other Whirlpool plants and few, if any, of the 300 employees who work in those operations would be transferred.

The building and the vacuum cleaner operation were going to be sold, according to the article.

The plant was non-union and there were no specifics about severance pay, retirement, pension or other layoff provisions.

One of the employees stated at the time that when company officials called a meeting on Friday morning, “they thought it was called to inform workers that another floor-care company had placed a big order on vacuum cleaners.”

Danny Morin, a 17-year Whirlpool employee was quoted as saying, “If this had happened during a year when production was down and people were laid off, then everybody would’ve understood. But things were going so well. This kind of took the air out of our sails.”

Even though some people felt that Whirlpool would not have a problem selling the “huge, modern plant and the profitable vacuum cleaner operation,” they still wondered who it would be and if the buyer would keep production in Danville.

Local authorities were also concerned about the loss of tax dollars for the city. The 420,000-square foot plant and property was valued at $14 million and generated thousands of dollars in property taxes; the 1,000-member workforce represented 10% of the total employment in the county; the $22 million a year payroll contributed to the local economy and turned in $116,000 a year in payroll taxes; plus the plant and employees contributed thousands of dollars to the United Way and other local institutions.

History of Whirlpool in Danville

Ground was broken for Danville’s Whirlpool plant in 1969. It was to be a $3 million, 270,000-square foot facility to manufacture its new trash compactors. By 1972, the plant began making the electric motors for Whirlpool refrigerators and freezer; then in 1974, the production of ice-makers began.

Two years later, ground was broken for a 48,000-square-foot expansion. However, in 1980, slumping sales forced the plant to lay off nearly 200 of the company’s 600 employees. But by 1983, ground was broken again for a $3 million, 52,800-square foot addition for the manufacturing of vacuum cleaners. And again in 1985, Whirlpool expanded with a 51,000-square-foot facility for engineering and design personnel and offices.

In 1989, the Danville division manufactured its 20 millionth vacuum cleaner, but more sluggish sales caused the layoff of about 200 employees. But by 1990, most of them had been called back and employment rose to 1,000. Production levels increased before the surprise announcement that the plant was being sold. 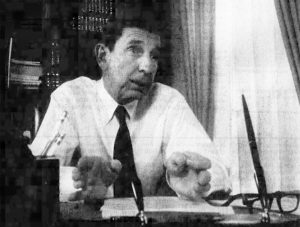 Danville Schools Superintendent Bill Grimes talks about budget cuts that need to be made for the school system on Feb. 11, 1990. (File photo)

In other local news, another story was about Danville School District’s new superintendent Bill Grimes, who had spent his first six months in office listening and observing how the district was working. The story said the second six months he was going to “test his knowledge.”

The 1989-90 school year budget was going to end up only leaving about $6,000 in the general fund, so budgeting for the upcoming year was going to be difficult. To save money during the current school years, Grimes had “rearranged bits and pieces of jobs” and managed to save $72,000 in salaries for the school system already.

Editor’s note: This is the last of a two-part series on goals and objectives city leaders met to discuss during... read more