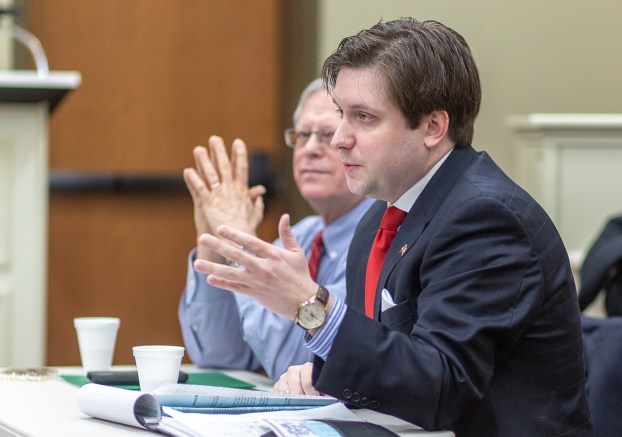 State Rep. Daniel Elliott says he will do what he can to help Boyle County secure land for a new jail facility from Northpoint Training Center.

The state prison facility has a lot of land off of Ky. 33 in northern Boyle County, and local officials are interested in potentially building the next local jail facility there, Jailer Brian Wofford explained during a “legislative coffee” event with Elliott and state Sen. Rick Girdler in Danville Monday.

Wofford said the Boyle County Detention Center has 220 beds, but his population is well above that — Monday morning, he had 290. On top of that, the jail’s population has lots of health problems, including drug addiction and mental health issues.

“It seems like county jails have become the dumping ground for the mentally ill,” Wofford said.

In order to provide the services needed by the people who wind up in jail these days, and to help rehabilitate people so they do not continue returning to jail, Wofford said he needs more space — the mental health services that are needed in particular cannot be offered as they should be in the current facility. 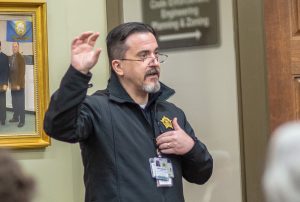 Boyle County Jailer Brian Wofford asks legislators to help move along the process of the state gifting some land at Northpoint Training Center as a potential location for a new county jail facility. (Photo by Ben Kleppinger)

That’s why Boyle County is interested in securing some land from Northpoint — it could provide a good location for a new jail, which could include spaces for rehabilitation and treatment services. But efforts to get the state to commit to giving Boyle County the land have been “pushed back” several times, Wofford said.

“Anything you all can do to speed it up or make sure it stays at the top of the pile” would be appreciated, he told Elliott and Girdler.

“I will do what I can,” Elliott said.

Wofford explained the delays have ostensibly been because of changes in leadership in the Department of Corrections. But, he said, “we can’t keep kicking this can down the road. The jail crisis is not going away in Boyle County.”

Elliott said he sits on a budget review subcommittee that will be reviewing the part of the state budget that could be involved in giving Boyle County the land. He said he intends to keep Wofford updated when conversations on that subcommittee begin.

“We understand the difficult position you’ve been put in as a county,” Elliott said.

Girdler took the opportunity to speak about the importance of understanding how addiction affects people who wind up in jail. He said it “takes a little bit of experience and educating us old people” to understand how powerful addiction can be.

“When kids get on drugs, we think they can get off any time they want to — that’s not true, and I’ve had to learn that myself,” Girdler said. “… It’s not like when I was growing up — you know, somebody brought some pot in from Manchester and it was supposed to be pretty good … but it wasn’t that good.”

A few in the audience chuckled.

“Y’all don’t know what that is? Manchester pot is supposed to be good,” Girdler said. “I’ve only smoked it one time in my life and (it wasn’t good).”

“Anyway, point being is this — we’ve got to have justice reform, but the first thing we’ve got to do is we’ve got to take these young 20-year-old, 21-year-old, 22-year-old kids and do something else with them besides putting them over there in jail,” Girdler said, to a smattering of applause. “… Put them back out here to work.”

Wofford said he believes Boyle County “has been a model, not only for the state, but the nation, on treatment programs … the thing is we lack the space (needed). … I have employees working out of closets because of the lack of space.”

“I’m not one of those who thinks we need to charge them with a felony,” Girdler said. “I think we need to get them clean, get them back over here and put them to work … let them be a part of society.”

Later in the meeting, Wofford and Boyle County Magistrate John Caywood also talked about how much the state of Kentucky pays county jails to house state inmates. Currently, the state pays $31.34 per day per inmate, which is supposed to be for that inmate’s room and board, plus some medical expenses, Wofford said.

But Caywood and Wofford said they think it actually costs Boyle County more than that to house state inmates, meaning the counties that fund the jail would be covering costs the state should be paying.

“Prices have gone up,” Caywood said. “The people in this room are paying the difference.”

“As a county, we lose money housing state inmates at the current rate,” Wofford said.

“The state is not paying its fair share on what it actually costs to house a state inmate,” Wofford said.

Boyle County Magistrate Jason Cullen returned the discussion briefly to land at Northpoint, saying Boyle County doesn’t want any money from the state; it just wants the land to build a jail on.

“I want to add onto that — I am asking for money, too, though,” Wofford said, causing the room to erupt in laughter. “… Who would go out and open up a business and lose money? Why would we expect the government to do that? I’m OK just breaking even … I cannot have 110 inmates there every day that I’m losing money on. That’s not a good ROI.”

Rep. Elliott said during the meeting that the issue of cash bail in Kentucky is still one being looked at by legislators.

Efforts to reduce Kentucky’s usage of cash bail — requiring people accused of crimes to pay money before they are let out of jail while awaiting trial — have been ongoing for years. Critics of the current system argue cash bail discriminates against poor people, who might wind up sitting in jail when they would otherwise qualify for release solely because they do not have money to pay. 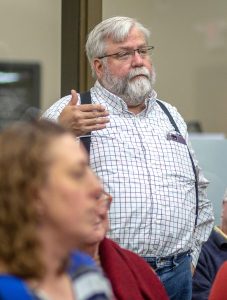 The issue of cash bail came up a couple times during Monday’s legislative coffee event — once during a discussion of the Boyle jail’s population level, and once when Steve Knight stood up to say he thinks victims’ concerns are not thought about enough.

“I’m sure there’s some innocent folks out there (in the jail), but probably the majority of folks that are out there are out there for a reason. Because they did commit a crime. They may not have been proven guilty yet, but there are victims. Most of those crimes have victims. So as you go through that process of considering whether or not to remove bail and all those things … please keep in the back of your mind that there are victims out there that rarely get to have their voice heard.”

Elliott’s comments about bail reform came in response to Knight.

“These people are charged with a crime and it is a delicate balance,” Elliott said. “And I do think we have to look at the severity of the charge and how bail is being applied to a given person who is in the system.”