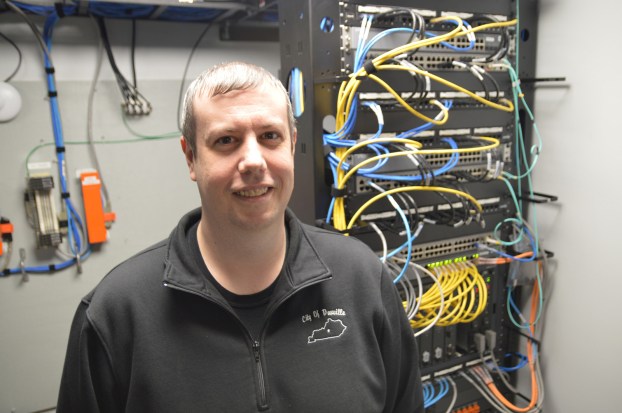 IT Director Nick Warren has worked for the City of Danville since he was 17 years old. He taught himself how to do programming and troubleshooting, beginning at an early age with his first computer. (Bobbie Curd photos)

One Day: IT director has spent two decades making things work for Danville

When Nick Warren began working in information technology for the city, his office was inside a tiny server room. “We had two servers when I started. We had a Unix box and a Linux box,” he says.

Now, as IT director, Warren oversees 30 or so servers that support city functions. His office in the basement of city hall contains a large screen on the wall — the network monitoring system. “We can look at all of our ports on our switches from here, determine their status, what’s connected to them — every single terminal; there’s probably about 500 of them in there.”

Warren has come a long way from when he began with the city at age 17, as a temporary summer helper with Public Works, back when the city had a Beautification Department. He was supposed to get laid off when winter came, but the city decided to keep him on, so he moved over to the street department; he worked for two and a half years as a temp before he was hired on full-time.

“I was on my third day, and came here to help move Donna Peek’s (former city clerk and HR manager) office. The guy I ended up replacing — he was pulling some new wiring. I said, ‘Hey, why are you pulling new ethernet cable?’ He kind of looks at me like, ‘Why does the grass-cutter know what I’m doing?’”

Warren says two days later, he was out mowing Hustonville Road and got a call from Luther Galloway (former city engineer), who told him to come to city hall ASAP. “I’m thinking, here I am, on my fourth day, and I’m canned already …”

But he met with former IT Director Chay Wesley, who spoke to him for about an hour, “then he told me, ‘OK, you don’t cut grass anymore. You work here.’”

Warren is completely self-taught, but says he’s picked up a lot along the way. He started getting into computers around age 6, when he got his first one. He got into programming and some design, but IT is a natural click for him.

The next big projects on the list will be getting the wastewater plant online, adding about two more servers to the city’s pile; then Parks and Rec will come online. “That will be our big project in the next few months,” Warren says.

He says there’s constantly exciting things going on in the world of technology, and in the city’s world, which makes time go by faster — even though he’s been here for 22 years, it doesn’t seem that long to him.

“We used to have hundreds of phone lines; now we have three main circuits that all those numbers point to. We don’t have them all scattered out like we used to — phones on the desks are little computers sitting there, now,” Warren says. 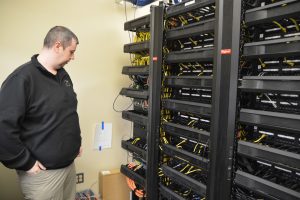 It takes a lot of nuts and bolts — and many, many wires — to run the technology supporting all the departments of the City of Danville, IT Director Nick Warren says. Here, he points out each component within the city’s main server room, in the basement of city hall.

After coming in at 8 each morning, checking the system and the servers to make sure there’s no alarms, Warren will regroup with the others on his team — Morris, who supports public safety; James McClure, who works with utilities; and Matt Owens, supporting all other city departments. They talk about any outages that ocurred the day or night before, catch up on ongoing projects and what the next moves are.

Warren’s desk is spotless, although he says he didn’t clean for our interview. “Every piece of paper I am given, I scan in,” he says, as any IT guy would. “I’m not a paper person.”

Stacks of new phones are on the shelf behind his desk, which he needs to give out to various city employees. Due to the city’s government account with its phone carrier, they get new ones every two years. They may not be “the latest and greatest” models, Warren says, “but still, they’re free.”

The most hectic day would be when a network segment is out, meaning people can’t work — the network runs the computers, the phones, everything, Warren says.

“The biggest thing for us would be if dispatch had an outage; that warrants an immediate response.” He says Morris will usually field those after-hours calls.

He shows the main server room, down the hall from his office. IT guys love the sound of the ambient noise coming from the running servers, Morris and Warren both say; it’s comforting to them — they enjoy it more than silence.

There are four servers that power city hall in this room — an access control server, an application server, one for employee billing and one for financial accounting, Warren says. “From here down is PD and fire. They have a lot more information, like all of the body cam and police cruiser footage.” All this data comes in and gets stored here, gets backed up, then, overnight, it gets replicated to Fire Station 2, where a server backup is located.

He pulls out a laptop built within the large system, showing which employee badge is recorded going into which door of which building. 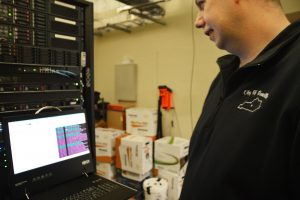 IT Director Nick Warren, while in the main server room in the basement of city hall, shows the how data is sent to another station where it’s also stored as backup, such as police officer video camera footage, and other important files.

The next big step for 911 will be implementing Smart911, a portal where citizens can register and add any information to make it easier for first responders to assist them. A texting system is also in the plans to be added, allowing callers to text and send photos, which come straight to dispatchers’ monitors like calls do. That system has to be approved by the 911 Services Board, then staff will work with wireless carriers to get call-routing in place.

Warren originally studied three-phase industrial controls when he began with the city, going to classes at night. He wanted to work with power in factories. But he never ended up using it.

He can’t think of a thing he frets over having to do on this job. “We’re really not public-facing. Our primary objective is to serve the departments, help them do their jobs and make them easier to do. I love what I do.”

He does look forward to being able to get out of the office periodically during good weather. “I like outside jobs, where you get to spend the day at a tower site.”

IT does maintenance on the multiple microwave radios (or repeaters) on each tower, allowing two-way radio communications.

Warren will only be 40 this year, but is already thinking about his retirement; he’s looking at doing so in about 3-4 years.

“I started young,” he says. “Don’t know what I’ll do after retirement, but probably something not tech. I’ve done that for long enough.”

State Rep. Daniel Elliott says he will do what he can to help Boyle County secure land for a new... read more