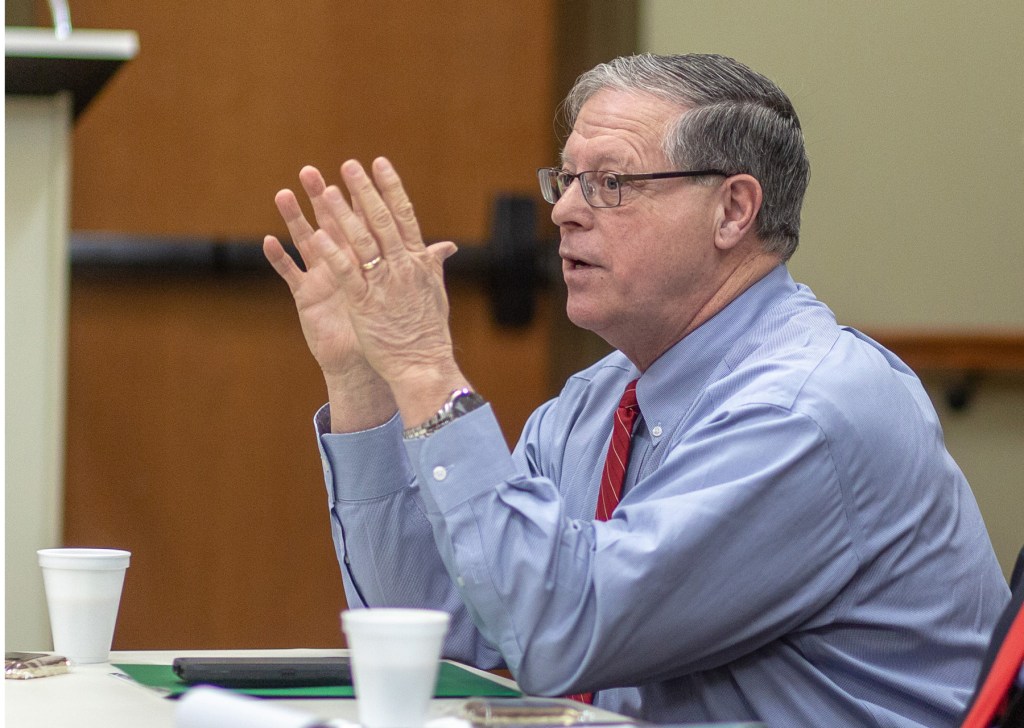 In one of the more contentious moments at a “legislative coffee” event Monday morning, state Sen. Rick Girdler got into a back-and-forth with local resident Julie Pease over gun laws and the Second Amendment.

Pease brought photos that she said showed a gun rights activist carrying a firearm being allowed to bypass security measures at the state capitol while a pastor who was not carrying a weapon was put through a metal detector. She said Girdler had said last year that he was “scared” of teachers who had come to protest at the capitol and wanted to know what the legislators thought of the guns rights activists who visited the capitol this year.

“I wasn’t scared” of the teachers, Girdler said. “I just stayed away from them.” As for the gun activists, “they actually were nicer to me than the teachers.” 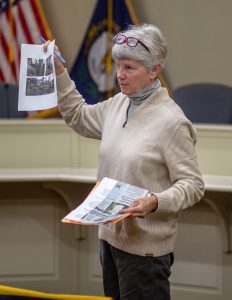 Julie Pease holds up photos she said show a double standard in whether people visiting the state capitol building had to pass through a metal detector or not. (Photo by Ben Kleppinger)

Pease said she would like to see universal background checks for people wishing to buy guns, as well as “red flag measures,” a term for legislation that could allow for the confiscation of guns from people who a court determines pose a threat to themselves or others.

Girdler said “I know little about” universal background checks, but would never consider voting for a red flag law — a statement which elicited loud cheers from some in the audience.

Girdler said one problem with red flag laws is that if the government attempts to take away guns from certain people, those people will try to fight back by shooting anyone trying to get their guns.

“And how is that right?” Pease asked.

“How is it wrong?” Girdler answered.

“For someone to shoot you?” Pease asked, incredulous.

“How is it wrong?” Girdler repeated.

“For someone to shoot you?” Pease asked again.

“I’m passionate about it just like you are,” Girdler said.

As the rhetoric between Girdler and Pease continued to escalate, Elliott interjected — “Hold on a second,” he said, asking for everyone to calm down and refocus on the purpose of the meeting.

Elliott said security measures at the capitol are determined by the state’s Finance and Administration Cabinet and the Kentucky State Police Commissioner has convened a group of citizens and legislative leaders to review current security policies concerning carrying guns.

“We will definitely look at what the recommendations are and they will eventually put those policies in place,” Elliott said.

Then Elliott emphasized that he and Girdler are both strong supporters of Second Amendment rights and suggested if Pease wants something different, she would need to get other legislators elected.

“Every two years, I have an election; every four years, he has an election. We run these campaigns and the winners go to Frankfort and the losers go home. And that’s the way it works,” Elliott said. “And we have espoused our views, what we want. And we are in Frankfort and those are the views we will have. We’ll have another campaign here this year and we will present our views and our opponents will present theirs and you the voters will make the decision.”

Other noteworthy moments from the legislative coffee included:

Girdler said he would only consider supporting the legalization of medicinal marijuana if the drug could be prescribed in pill form like other medications. And he said because Kentucky does not tax any medications currently, he doesn’t believe it would be appropriate to tap medicinal marijuana as a revenue source by taxing it if it were legalized.

Elliott said he is “on record voting for medical marijuana,” and he believes it should be taxed even though it is a medicine.

“Medical marijuana is one of the things I hear as much of (from constituents) as anything,” Girdler said. “I am dead-set, 150% against recreational marijuana. I don’t want to see it. Now, maybe the next guy that runs will want to see it.”

Lukins said immigrants are often already fearful of law enforcement officers and the legislation would contribute to that fear.

“They’re saying, ‘Well, why do something now when there isn’t a problem?'” Girdler said. “When I was working for these people who had cattle, we didn’t shut the gate when the cattle was out, we had to shut the gate before the cattle got in — before they started out.”

Girdler said Senate Bill 1 is an effort to ensure Kentucky doesn’t follow in the path of Virginia and allow sanctuaries for immigrants.

Lukins pointed out if the Census undercounts immigrants because they are fearful of the government, it will potentially lessen federal funding for everyone in the area.

“Yes,” came a chorus of voices.

Girdler asked how they could get Social Security numbers.

One man in the audience explained how workers can have tax ID numbers if they don’t have a Social Security number.

Another audience member said SB 1 “encourages profiling” of people who might be immigrants and “the politics around it has been to associate immigrants with criminality.” 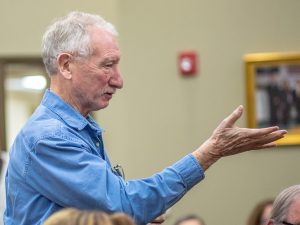 Jim Porter comments on Senate Bill 1, telling his legislators he believes it is a “solution in search of a problem.” (Photo by Ben Kleppinger)

Later on, Jim Porter said he thinks SB 1 is “a solution in search of a problem” and said he didn’t like how Girdler compared immigrants to “cattle getting out of the fence or whatever.”

“Talk to your landscapers, talk to your famers who use immigrant labor, and you will find that this bill is going to hurt them — it’s not going to help them,” Porter said.

Girdler said Sen. Paul Hornback, the chair of the Senate Agriculture Committee, “sits next to me” in the Senate chambers and “he was for it.”

Jewel encouraged Girdler to read about the Community Farmers Alliance’s position on the bill.

Girdler said Hornback is “head of the agriculture in the state of Kentucky” and reiterated that Hornback thinks SB 1 is good.

Brass Band Festival will have new director in August