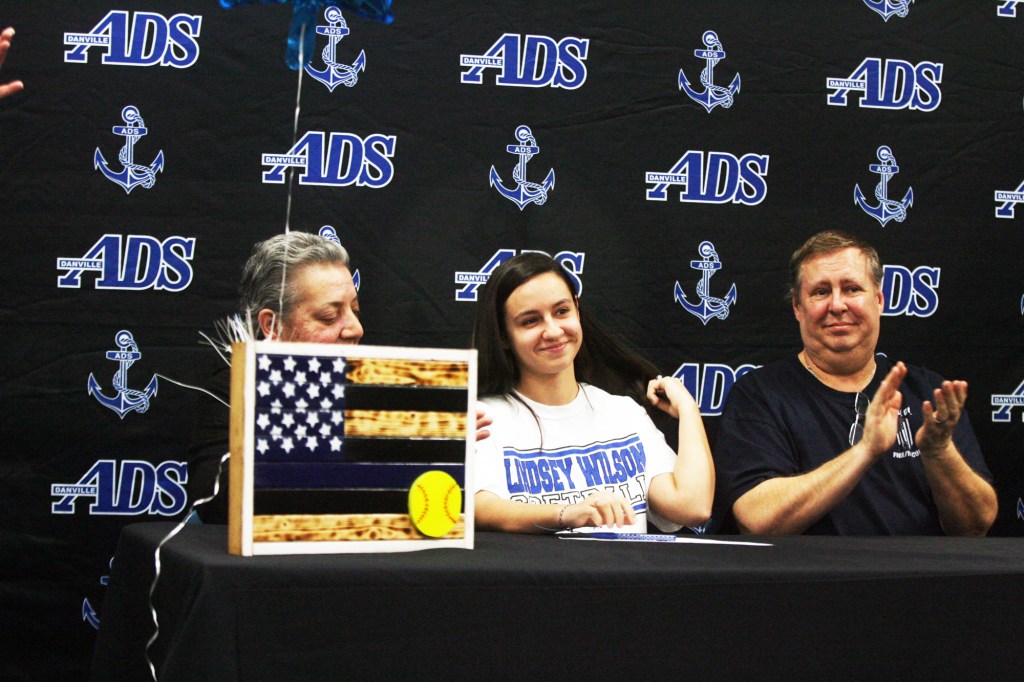 It’s been awhile since the Danville softball program had a player sign to play collegiately. The last time it had happened was in 2013. That changed on Wednesday when senior Abby Thomas signed to play for Lindsey Wilson College.

“It means a lot to me,” Thomas said about being the first in almost a decade to sign with a college. “It shows how much the program has progressed through the years.”

That was highlighted in an unusual position switch that Thomas made when she joined her travel team, the Bluegrass Force. Up until then, she had been a catcher since she was “four or five” years old. For the Force, she switched to shortstop.

“She’s a lot better shortstop,” Choate said. “She’s a really good catcher and a well rounded player but we find she’s got a little more strength at shortstop because she knows how to dive for the ball and can take the hops that are almost impossible.”

“I had to learn to adjust to things when it comes to, like, attacking the ball and staying on my feet,” Thomas said about the change. “It was difficult but it was a difficult thing that I loved. I loved getting to see where else I could be better used at.”

While she had been playing catcher for the Admirals, she’ll be going back to shortstop for her senior year and she is “very excited” about it.

Thomas knew she wanted to go to Lindsey Wilson from the first visit, she says.

“Immediately… it felt like home. Everyone was very accepting,” she said. “Their campus is very diverse. There’s so many different people from different walks of life. When I talked to coach about the team and what the team stood for it felt like it coincided with me and was something I wanted to be a part of.”

“It seemed like a good fit for her and for us,” Dews said about the visit. “She’s a phenomenal person and she’ll come in and I know she’ll work hard and compete day-in-day-out.”

If her team-first attitude is the first thing everybody says about Thomas, the second thing is her work ethic and love of the game. Breitenbach said that Thomas is playing softball “24/7”.

“She’s really aggressive and always hustles. Her stats speak for themselves — her fielding stats are almost perfect,” Choate added. “She’s the type of player who wants to do anything the team needs.”

Thomas also said that the signing will take a lot of pressure off of her for her last year of high school ball.

“Having signed today lets me focus on the high school season and then after that I can focus on just the college season,” she said with a big smile on her face.

“You hear that a lot, don’t you? Seniors — in any sport — once they get this signing done, they can kind of relax,” Breitenbach added.

More than just a versatile, high quality player, though, Lindsey Wilson is getting a high caliber person as well.