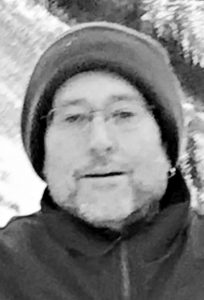 Daniel Lee Garnett, 54, of Danville, died February 8, 2020. Born October 17, 1965 in Lexington, he is the son of Lee Garnett of Boynton Beach, Florida and the late Jo Purkins Garnett.

Daniel was a 1983 graduate of Danville High School and attended the University of Kentucky, earning his MRI Certification. He was an avid UK Basketball fan. Daniel played the tuba in both the DHS band and the UK band. He loved to travel, eat and cook, sew and made wonderful leatherwork. He had a wacky sense of humor, was a people person and he could make anyone laugh, usually at their own expense.

In addition to his father, he is survived by his two favorite sons, Jackson Garnett of Boynton Beach, Florida and Alex Garnett of San Diego, California and his perfect sister, Joanna Garnett (Robert) Wilkirson of Lexington.

Visitation will be from 11 am to 1 pm, Saturday, February 16, 2020 at Stith Funeral Home, Danville followed by a graveside service at the Athens Cemetery, Athens, Ky. at 2:30 pm, Saturday afternoon. Dr. Robert Baker will officiate. Pallbearers will be Benny Myers, Malcolm Miller, Brian Morgan, Steve Hamblin, Dave Eckman. Memorial donations are suggested to his favorite weekend, the Great American Brass Band Festival. The online guestbook is available at www.stithcares.com.