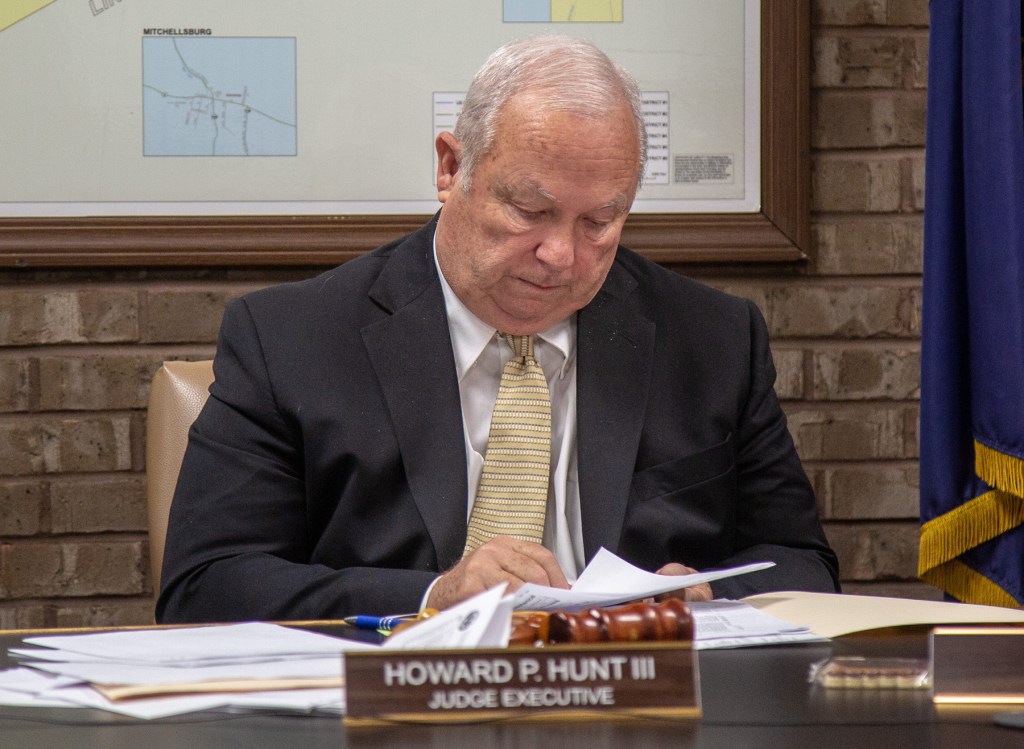 Boyle County Judge-Executive Howard Hunt ponders Tuesday which way to break a tied voted on choosing who will provide flowers in Constitution Square Park this year. (Photo by Ben Kleppinger)

Boyle County magistrates have a lot on their plates these days — a looming multi-million-dollar bill for a new jail; rising pension costs; economic development; the 2020 Census; maintaining county roads …

But it was flowers that divided the fiscal court more than anything else yet again this week, when for the second time in as many years, Judge-Executive Howard Hunt had to break a tied vote concerning flowers at Constitution Square Park.

This time around, Hunt actually broke two tied votes — first by voting against keeping the local company, Cottage Interiors, which has been planting and maintaining flowers in the park; and again by voting in favor of paying Boyle County FFA students to do it instead.

Magistrates had three bids to choose from for who would plant flowers and maintain them this year at the park, which is the location where Kentucky’s original Constitution was drafted.

Cottage Interiors, owned by local resident Janet Hamner, wanted $2,500-$4,700 for the flowers and $2,200 for maintenance from May through September.

McAfee Mowing and Landscaping bid almost $6,000 for the job.

Boyle County FFA said it would plant and then maintain the flowers from May 18 through Oct. 3 for a $2,694.90 donation to the club.

Debating the value of experience

“I think we should go with someone that’s got the experience in looking after them and planting them and so on,” Magistrate Phil Sammons said. “I make a motion we go with Cottage Interiors, because she has experience.”

It would be a moment before Sammons got a second to his motion, however.

“I think it’s time to take a chance on giving young people the opportunity to contribute to our community with their volunteer time,” Ellis said.

Magistrate John Caywood then seconded the motion for Cottage Interiors, while disclosing he and Hamner are friends.

“But I know what she has done in the past,” Caywood said. “I know it coordinates with what’s on Main Street and I think that’s critically important.”

Hamner also maintains flowers downtown for the City of Danville.

Hunt acknowledged that the work Hamner did in Constitution Square last year was “outstanding.”

Sammons said Hamner’s proven track record is why he wanted to stick with her.

“I just know what kind of job has been done,” he said. “… I just think it’s the best buy for us, because we know what’s going to happen. We know it will be taken care of.”

Magistrate Jason Cullen said because FFA included a plan for maintaining the flowers with its bid, he liked the idea of supporting the local student organization.

Split down the middle

Sammons and Caywood were joined by Magistrate Jamey Gay in voting to keep Cottage Interiors as the flower provider. But magistrates Ellis, Cullen and Ronnie Short voted against.

Hunt counted the equal hands for yes and no and sighed, “Oh, you guys.”

“This is what you get paid for,” Cullen said to Hunt.

“I agree that everything looked beautiful last year,” Hunt said.

There followed a lengthy pause as Hunt pondered which way to vote. Cullen eventually broke the silence, lobbying for Hunt to vote with the “no’s.”

“I agree with all the statements made by all the interested parties,” Hunt said, before voting no and defeating the motion. “… I would be the fourth vote to not accept the bid.”

Ellis immediately made a motion to choose the FFA bid and Cullen seconded. The vote split again down the same lines, and this time Hunt broke the tie with a yes, officially choosing FFA as the flower provider.

“I think we’re going to be sorry, but that’s fine,” Sammons said.

“We’re investing in our future, our young men and women,” Ellis said.

“I know we do, but they’re not qualified to give what we need,” Sammons said.

In April 2019, magistrates had to decide whether to pay Hamner an additional $550 for maintenance of flowers at the Governor’s Circle in Constitution Square. The magistrates split 3-3 at that time, too, but along different lines — Cullen, Ellis and Sammons were against it then, and Gay, Caywood and Short voted in favor, along with Hunt’s tie-breaking yes.

On the day of the 2019 vote, Sammons said he was opposed to paying the extra $550 because the flowers were coming from a Lexington grower, when there were groups in Boyle County that might be able to provide the flowers instead.

“I don’t like that at all,” he said, suggesting that local FFA or Kentucky School for the Deaf students could be used instead. “… We need to buy anything we can local.”

Hamner said at the time in 2019 that getting flowers from a local source was no easy task.

“We have tried in other years — the city has — to buy flowers locally, and we fail miserably in that effort,” she said in 2019.

Hamner also grew frustrated with magistrates’ requests during the 2019 meeting, because she had already “begged” a contractor to do work for the county and given magistrates a deal on the price.

“Buy our lunch,” Sammons retorted at the time.

“Well, you’re not going to get that,” Hamner said. “… When it comes to next year, I will be so happy to give this job up, I promise.”

Some Centre students quarantined as precaution against coronavirus