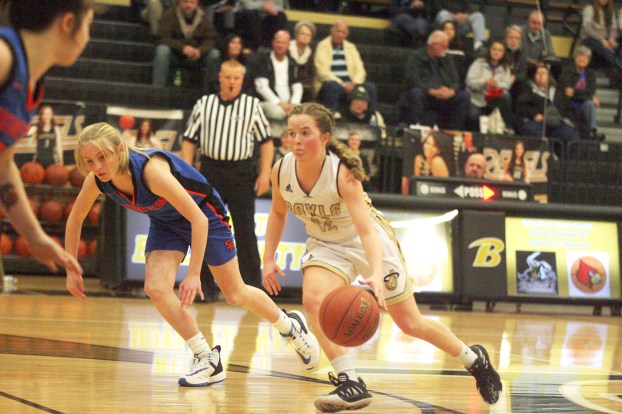 Zoey Robbins was part of a fourth quarter burst of energy for Boyle on Tuesday night. (Photo Derek Brightwell)

First year head coach Ryan Wiersma wasn’t on the sidelines for the Boyle County girls team’s 52-28 loss to Southwestern (20-4) on Tuesday night. But his coaching philosophy and mentality was present in the form of Brian Britt who filled in for him.

And while the final score looks bad, the effort from the Lady Rebels in the fourth quarter is exactly what the coaching staff has wanted to see from their team.

“That’s the effort we want to see defensively. We want them to speed up,” Britt said. “We have a tendency to stand and watch and then try to react. And then offensively we come down and get in a big hurry which leads to our turnovers. We’re emphasizing speeding up on defense and slowing down on offense.”

Boyle has played a tough schedule in a loaded 12th Region. In addition to the two games against Danville, the Rebels have taken on Rockcastle County, Mercer County (twice) and Casey County before Southwestern on Tuesday. That’s the top five teams in the region. Their next opponent is Wayne County who sits at seventh in the region and their final opponent, Pulaski County, is sixth.

Wiersma and the rest of the coaching staff knows that while it’s leading to some lopsided finals, the tough schedule should sharpen them up for an open district tournament.

“I know these girls are down a little bit, but playing Casey County, Rockcastle, Southwestern — that’s some of the top teams in the region and we’ve been able to play with them for two quarters,” Britt said. “With those other games, we’ve been down four or five going into halftime… Our coaching staff tells them everyday that we believe in them. Now it’s just a matter of if they believe in themselves. They just need to see the positives at the end of the game with a W so they start feeling a little better.

“This past weekend, we play Danville on Friday, Mercer on Saturday and then turn around and get Southwestern today. That’s tough with a new program and new coaching staff.”

The Rebels showcased their ability to hang with these teams in the first quarter on Tuesday when they trailed by only two points going into the first break.

“I really think they responded to what the coaching staff put together for a game plan. First quarter was almost perfect,” Britt said.

But last year’s state runner up proved to be too much for a team still looking to find its identity.

Keely Bowling led the team with 12 points while Alyssa Wray had eight and pulled down seven rebounds. In the final period, Ella Coffey, Maddy Baker and Zoey Robbins highlighted that more aggressive defensive effort that Britt talked about and kept the game from entering the running clock.

Tuesday night’s 76-74 overtime loss to Southwestern was a microcosm of what has been plaguing the Boyle County basketball team... read more