The Secret Life of Bugs 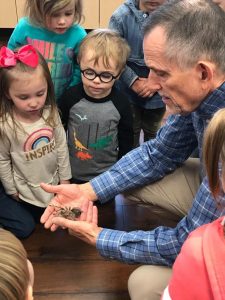 Love them or hate them, bugs are fascinating. In February, the Art Center of the Bluegrass takes you into the world of Tom Myers, a Board-Certified Entomologist and President of All Rite Pest Control in Lexington. Myers is also a nationally renowned nature photographer who is well known for his work with insects.

At a Lunch with the Arts presentation on Feb. 19, Myers will discuss and display some of his outstanding photographs and will bring some small surprise guests with him.

Myers’ pursuit to experience and understand the incredible biodiversity of the insect world has led him into the rainforests of South America, Africa and Asia. His passion for nature photography has taken him to the Polar Regions at both ends of the earth to look at endangered species and habitats in these areas. All in all, he has traveled to seven continents, sometimes under the most extreme circumstances. Sometimes, the story behind his outstanding nature photographs are as interesting as the photographs themselves.

Myers grew up on a farm in Salem, Indiana. There, his family raised cows, sheep and ponies. It was in 4-H that his passion for insects got ignited. It didn’t hurt that his mother had familiarity with insects from her own experience at a research orchard. This allowed Myers to keep his insects around the house to study. Eventually, Myers attended Purdue University, going on to complete his graduate studies at Iowa State University where he did research on agricultural insects.

Myers’ passion for nature photography has taken him all over the globe. He has photographed polar bears in the Arctic, penguins in the Antarctic, creatures and insects in the Amazon and African rainforests. It comes to no surprise that his work in the tropical rainforests has resulted in the discovery of several species previously unknown to science. His photos are in great demand, having appeared in National Geographic publications and on display at the Smithsonian Institution. His work can also be found in textbooks and scientific publications.

When Myers is not on one of his photographic ventures or battling bugs at work, he finds time to speak at state and national conferences, training courses, and seminars where his brilliant photographic work, coupled with his vast knowledge of entomology, makes him a much sought-after speaker. He is very active in youth and public education and has made hundreds of presentations to schools, scout troops, nature groups, clubs, civic groups and museums. He is very active in the national pest control fraternity Pi Chi Omega, donating his fantastic photos for the organization’s annual auctions to benefit students pursuing entomological studies.

Lunch with the Arts, featuring Tom Myers will be noon-1 p.m. Wednesday, Feb. 19 at the Art Center of the Bluegrass. Cost is $5 at the door.