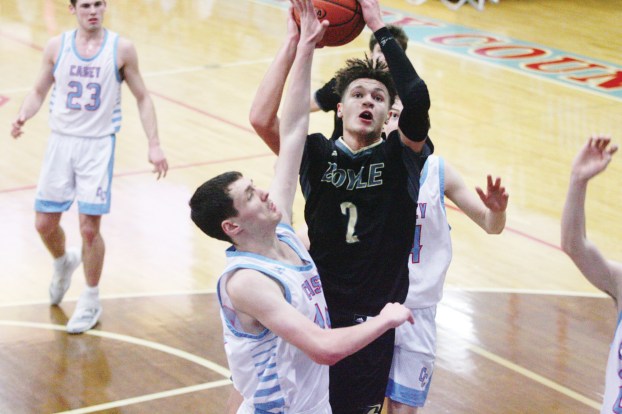 Luke Imfeld goes up for a layup against Casey County. (Photo Derek Brightwell)

Boyle wins, but still has some questions

It got interesting in the final few minutes of the game, but Boyle County was able to get out of Casey County with an 81-75 victory.

“It’s good to get the win and we got some things out of the kids we hadn’t been so those are positives,” Boyle coach Dennie Webb said after the game. “But the decision making at times is still disappointing.”

That decision making trouble started before tip-off Thursday night as the Rebels were assessed a technical foul for dunking in the pregame warm up. And it “kind of snowballed from there,”

On the defensive end, Webb wasn’t pleased with the effort — especially against Casey star Spencer Baird.

But overall, Webb can’t complain too much about the result.

The Rebels were down starter Grant Hotchkiss who was nursing an injury suffered in the loss to Southwestern on Tuesday and pivotal reserve William Carr who was sick. That caused a shuffling of lineups that resulted in some unfamiliar pairings.

“I thought we played hard, we just didn’t play smart,” Webb said. “Taking bad shots — shooting it when we shouldn’t be and taking bad shots when we should be moving it around and trying to get layups. And then they pressured us and got after us and we didn’t handle it well. That surprised me because we usually handle it a lot better than that. I think it’s a combination of coming down here on the road, not being focused.”

Missing the senior leader Hotchkiss, Webb believes, contributed to the trouble with the press that Boyle had Thursday night.

Webb was encouraged by the performances off Karson Thompson and Hagan Webb though. Thompson had a season high 22 points and Webb got out of a slump to score 15.

“They stepped up,” he said. “We had some kids that hadn’t been scoring. Hopefully that’s a positive they can build on.”

Currently the Rebels are in the middle of a stretch that sees them play six games in 10 days. Those quick turnarounds have led to Webb seeing his team make some of the same mistakes, which has caused a little frustration.

“What’s frustrating is we keep saying the same things. I feel like I’m telling you the same things after every game,” he said. “It’s gotten better but it’s still an achilles heel. We’re still going and grinding. Got the W and we’ll take that. We didn’t play our best. Defensively was still disappointing. But we’ll get after it and look at the film. We got another quick turnaround here. It’s a busy five days coming up.”

Boyle travels to Bryan Station on Saturday and Pulaski County on Monday before closing out the brutal run at home against Wayne County on Tuesday for Senior Night and at home Thursday against Clay County for the season finale.

For the last two years, Danville football coach Clay Clevenger has also been the president of the Kentucky Football Coaches... read more