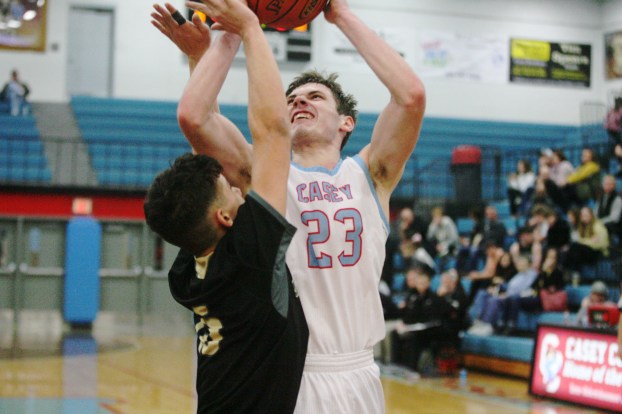 Casey County coach Michael Merriman won’t pretend that the season is going the way he wants from a results standpoint.

The Rebels have only won three games in 27 tries after a comeback attempt against Boyle County came up short and resulted in an 81-75 defeat.

But that doesn’t mean that Merriman doesn’t like some of the things he’s seen from his players.

“You can’t fault our kids’ effort, though,” he said, talking about a fourth quarter that saw his Rebels outscore their counterpart 25-17. “We could’ve come out here — we’ve won three games — my kids could come out and lay down and give us no effort. They don’t do that. They come out and fight and I am proud of them. I don’t care what the final record is, I’m so proud of this bunch.”

One of the biggest bright spots — Thursday night and all year long — has been Spencer Baird. Earlier in the season, he scored his 1,000th career point and he added 43 points to that total on Thursday.

“He’s just a special player. Let’s be honest, he’s a good player,” Merriman said. “What a lot of people don’t realize about Spencer is that he just plays so dang hard. There’s times when he’ll get some stuff just from how hard he plays. It’s his biggest strength and his biggest weakness. But that’s just how he is and it helped our team tonight.”

In the third quarter of Thursday night’s loss, Boyle got an offensive rebound and scored a second chance bucket — they had 19 offensive boards and 22 second chance points on the night — and Merriman called a timeout to challenge his team. He asked them where their pride was. They came out and responded with a run that gave them a chance to win it in the fourth.

“I thought they responded real well. They started playing defense a lot better. They still didn’t rebound like I’d like, because that continued to hurt us,” he said. “But I think we were down 12 when I said that. I called a timeout and challenged them. From that point on, we outscored them by about eight. They got out there and got after them.”

The Rebels closed the gap to as little as five points with under a minute in the fourth quarter. Merriman believed his team could pull off the upset and in the final timeout, told his team that they were going to.

“I told them in our last timeout — we were down 10 —and I said ‘I don’t care if we win this game or not, I’m going to be proud of you. But make no mistake, we’re going to win this game,’” he said. “I felt like we all believed that and it showed in the way we played. We believed we were going to win and we fought until the very last second.”

It’s been a long and difficult season for the Rebels. They had a handful of players walk away from the team before Christmas that left them shorthanded and young for the remainder of the year.

“They’re doing fine. We’re competitors — nobody wants to lose,” Merriman said about the group he’s got.. Our focus now — being extremely young — it’s got to be just getting better. Every time we step on the floor. I feel our guys have done that and we have gotten better.”

Still, while he knows that his team doesn’t have the manpower to play the frenetic defense they did in the fourth quarter, he wants them to play with that belief they showed after that final timeout.

“I told them in the locker room that if they play like that every second they’re on the floor… and sure up the rebounding and you can beat some teams.”

Boyle wins, but still has some questions

It got interesting in the final few minutes of the game, but Boyle County was able to get out of... read more