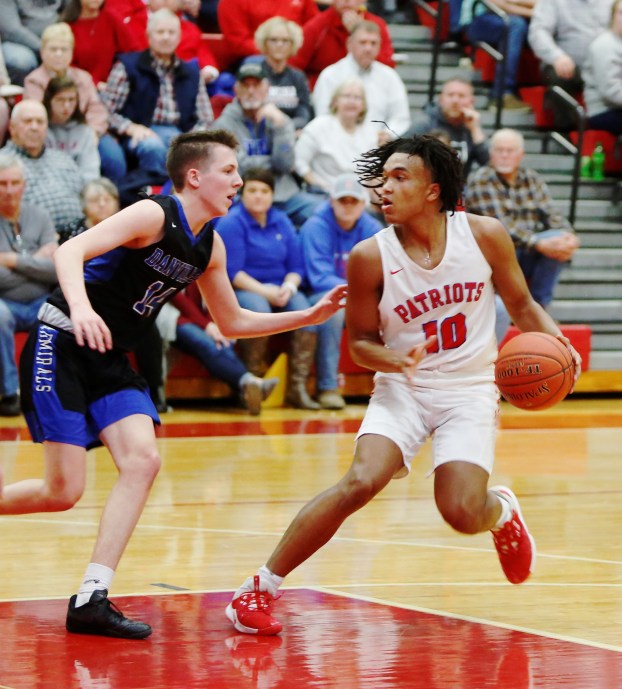 Jaxon Smith (10) is one of the reasons Lincoln is hoping to repeat as district champs. (Photo Mike Marsee)

STANFORD – The Lincoln County boys got exactly what they needed Friday night.

The Patriots needed a victory over Danville to lock up the No. 1 seed for the 45th District Tournament. They needed a hot start to put the shorthanded Admirals on their heels. And they needed almost every bit of the 20-point lead they built in the first half as a cushion against a comeback attempt.

They got all of those things and more as they continued to build momentum for the postseason with a 69-55 victory at J.C. Eddelman Gymnasium.

Lincoln (22-6, 5-1 district) avenged an earlier loss at Danville (17-8, 3-3) and extended its winning streak to eight games with two remaining in the regular season.

“It was a good win for us,” Lincoln coach Jeff Jackson said. “They’ve got a heck of a basketball team and it was a hard-earned win, and I’m excited for our kids and happy for them that they were able to get the win tonight.”

The Patriots got off to a hot start, scoring the game’s first six points and opening a double-digit lead during a spurt of 14 unanswered points in the first period.

“Getting off to a good start was very beneficial to us,” Jackson said.

Lincoln got 25 points from Jaxon Smith and 17 points from Elijah Frye, and the Patriots and their fans got to celebrate as both players passed the 1,000-point mark during the second half and became the 15th and 16th players in the program’s history to reach that milestone.

“Elijah and Jaxon getting their 1,000th point tonight was really good, and I’m happy that it happened at home. We had a great crowd, and our student body was awesome again,” Jackson said.

Smith had been held to seven points in Lincoln’s 58-49 overtime loss at Danville on Jan. 10.

The Patriots also got another double-double from Riley Bodner, who had 16 points and 14 rebounds.

And perhaps most importantly, they got the top seed for the district tournament, which will be at Lincoln the week of Feb. 24. The Patriots finished two games ahead of Danville and Boyle County, who tied for second place in round-robin play.

Lincoln did much of the heavy lifting in the first half Friday, opening a 21-7 lead with the 14-0 first-quarter run that included seven points by Smith. Back-to-back baskets by Bodner then launched an 8-0 run that pushed the lead to 29-12 midway through the fourth quarter.

“They’re so good defensively, and this time of year everybody knows everybody, so they’re going to take things away from you and you’ve got to make plays,” Danville coach Ed McKinney said. “I think if you watch them on their end, it’s not necessarily the stuff they’re running; they’re making plays. You’ve got to make plays, and we didn’t make enough in the first half.”

McKinney noted that Lincoln has been on a roll, having won 12 of 13 games since consecutive losses to Danville and Pulaski County in mid-January. And he said the Admirals’ task was made tougher by the absence of leading scorer Dante Hayden, who sat out Friday’s game with the flu.

“They’ve left a lot of teams in their wake,” McKinney said. “They’re playing at a pretty high level, so you’ve got to try to win each possession. We know it’s going to be tough, and you take Dante out of there and it changes roles.”

Danville cut a 19-point deficit to 12 in less than two minutes early in the third quarter, but Lincoln answered with a 14-4 run to take its largest lead at 56-34 in the final minute of the period.

The Admirals then made a charge, as Aden Slone and Ethan Cooper combined to score all of their points in a 16-3 run that pulled them within 59-53 with 2:26 remaining.

Lincoln slammed the door there, however, as Frye and Smith combined to go 10 for 10 at the free-throw line down the stretch to help the Patriots put the game away.

“We fought hard in the second half and did some good things defensively, so I was proud of that,” McKinney said. “That’s a nice team, and on their home floor with a good crowd. We’re not the only ones in this region that are going to be up against it.”

Senior Spotlight: Danville’s Sallee leaving no questions on the mat

This weekend, Danville senior Morgan Sallee is closing out his high school wrestling career with his fifth trip to the... read more