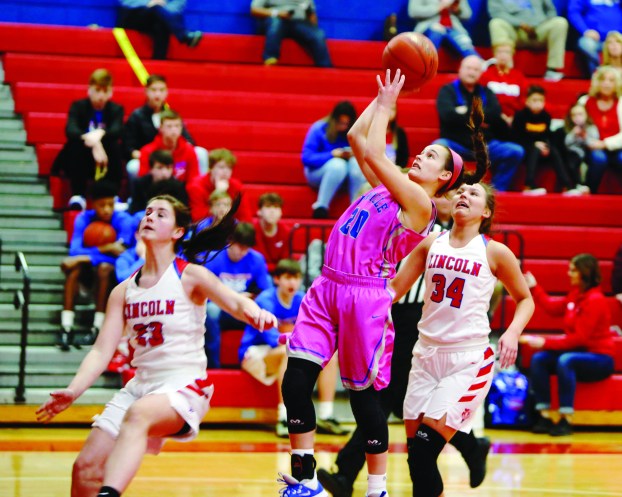 Ahyana Burnett (20) of Danville gets past Lincoln County defenders Taylynne Shearer (23) and Haleigh Ellison (34) for a shot during the first quarter of Danville’s 53-42 victory Friday. (Photo Mike Marsee)

STANFORD – It won’t matter a week from now, but going 6-0 is something special for the Danville girls.

The Lady Admirals completed a regular-season sweep of their 45th District opponents – likely for the first time in the program’s history – by beating Lincoln County 53-42 on Friday night.

Danville already had the No. 1 seed for the 45th District Tournament in hand when it came to Lincoln, and coach Judie Mason said she didn’t say much about completing the sweep after the game. But she said it is a significant achievement for a team that isn’t too far removed from some lopsided losses to Lincoln.

“It is big for us,” Mason said. “I can remember the years that we’d come over here and get blown out by Lincoln and couldn’t compete. We’d have to play our best game and they had to play bad for us to even be in the game. So that shows where the program has come over the years, and I am proud of that.”

Camryn Preston scored 19 points to lead Danville (19-7, 6-0 district) to its 11th win in 13 games and its first win in three seasons at Lincoln’s J.C. Eddelman Gymnasium, where the district tournament will be played the week of Feb. 24.

“This is where the district is going to be, and we got a game under our belt here,” Mason said.

Mason said she wished the win had come a little easier, as it appeared it was going to when the Lady Admirals led 23-10 early in the second quarter.

Instead, Lincoln (12-15, 3-3) clawed back to within four points midway through the fourth quarter before Danville scored 10 of the last 13 points.

“This game shouldn’t be this hard. Last game I didn’t play with two of my best players, and this time they didn’t have their best player, and they were two totally different games,” Mason said.

Preston and Lara Akers were out of the lineup when Danville defeated Lincoln 65-40 on Jan. 10. This time around, Lincoln was without leading scorer Trinity Shearer, who has missed four games with an ankle injury.

Still, the Lady Patriots made a game of it in the second half.

Lincoln was within 32-29 midway through the third quarter but managed only one basket in a stretch of about 5 1/2 minutes as Danville reopened a 43-32 lead with 5:51 remaining.

The Patriots survived that stretch and got consecutive baskets from Lydia Rice, Chloe Ralston and Haleigh Releford – as well as three straight Danville turnovers – to pull within 43-39 with 4:42 to play.

They struggled to create shots after that, however. They turned the ball over on four of their next five possessions, managed only one more basket – a second 3-pointer by Ralston with 3:13 left that made it 47-42 – and had only two field goal attempts in the final 2:10.

“I think they were holding it longer than we were,” Mason said. “I was just wanting the clock to run. We went to our matchup and I think it kind of confused them a little bit, and a lot of times that happens when you don’t have your go-to player in the game.”

Preston hit three 3-point shots and scored 11 of Danville’s first 14 points, and she added six points in the fourth quarter. She also had seven rebounds, as did Desiree Tandy.

Tandy and Jenna Akers scored eight points each for the Lady Admirals.

Tuesday’s loss leaves Rebels with lots to work on

Boyle County took a 31-29 lead into the half, but in the third quarter, the Admirals came out red hot... read more