From our schools: The Rebel Times 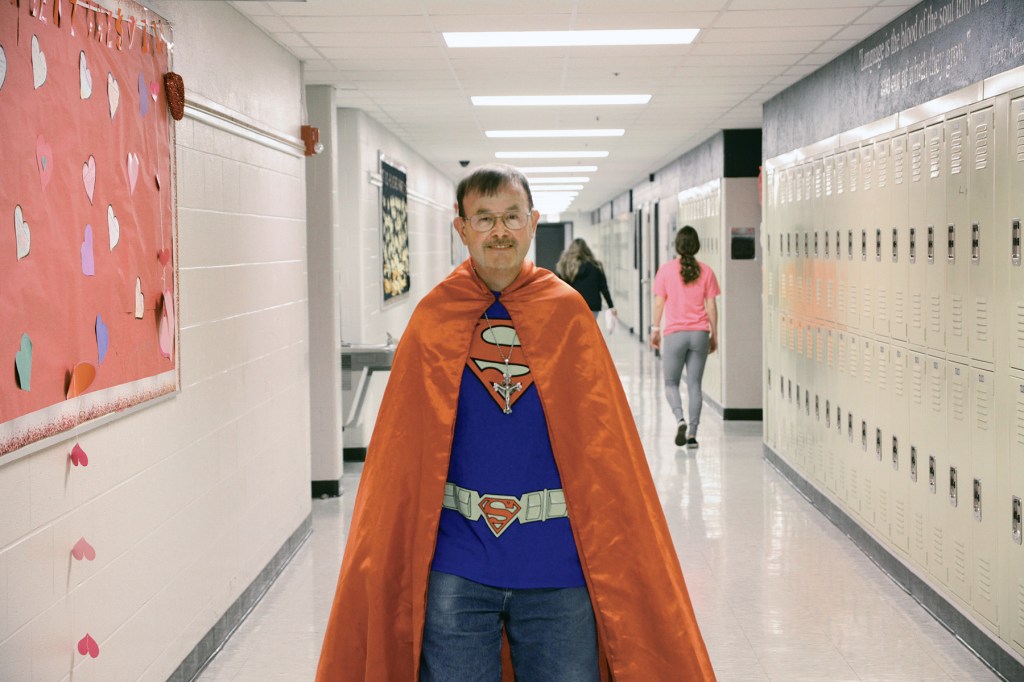 Rick Richardson’s superman cape has made him famous in the halls of Boyle County High School.(Photo by Alana Lassiter)

The man in the red cape; 42 years of heroic custodial service

Not all heroes wear capes, but at Boyle County High School (BCHS), one actually does.

Custodian Rick Richardson is the secret to the success produced at Boyle County as he humbly comes to work every single day, keeping his head down to the grindstone with a smile on his face.

With an incredible memory, Richardson is quite the storyteller. Dates and events are on immediate recall, and he always enjoys going back in time.

On Saturday, May 24,1958, a BCHS legend was born. When Ricky Clark Richardson was brought into the world, “my mother had to miss graduation because she was in the hospital giving birth to me”.

Growing up, he was very interested in automobiles. “I was a flag dropper for some legal, and maybe some non-legal, drag racing,” Richardson shared with a grin.

“When I was in the sixth grade, I won the science fair with an incubator me and my dad made.” He swept the competition by placing first in the sixth-, seventh- and eighth-grade division. When asked what day that was, Richardson quickly responded, “March 16, 1970.”

Even though Richardson did not participate in any sports or clubs throughout those early days, he was unknowingly establishing his footprints with the school system.

Beginning high school in Aug. 1972, he discovered his own way of becoming more involved. “I started out my freshman year helping my school’s janitor clean restrooms, sweeping the halls, and wiping down the windows,” he said.

Along with the time shared with his custodial friend, Richardson spent the remainder of his day at the Garrard County Vocational School. There he focused on electrical training, later earning his electrical license.

Immediately after high school, Richardson went into the workforce. He quickly found himself working two jobs simultaneously, at Kroger and Toliver Elementary School. Unfortunately, after only three months of working both jobs at once, Richardson became very sick with pneumonia and was eventually let go due to his illness.

But as the saying goes, “God works in mysterious ways.”  Without the suffering from illness and job loss, Richardson might not have had the opportunity to serve the staff and students at BCHS for the past 42 years.

“Boyle County has always been a part of my life. It has a long history and tradition, a great place, and even better people,” he said. “I always feel welcome, like I’m at my own home.”

Clearly, Richardson loves his job and would not trade it for the world. However, the job has become more challenging for him.

“It has gotten harder throughout the years. There’s more and more things that have to be done around the school every year,” he said.

Notably, he has not considered retiring anytime soon. His pride is not in his paycheck, but in the appearance of the school. Richardson wants everyone in the building to feel like they are in a safe and clean environment the moment they walk in the door.

“It puts a smile on my face knowing that people feel this way when they come inside,” Richardson said, with a smile of his own.

A close friend of Richardson’s at the school is football and weightlifting coach Jeff Hester. The two men have known each other for the past 19 years.

They automatically connected one day when Richardson caught Hester’s eye by wearing his famous superman cape. Caught off guard, yet intrigued, Hester quickly approached Richardson and began asking questions out of curiosity. Similar interests were discovered, and at that moment, a friendship for the ages began.

Hester looks forward to their daily conversations. “Rick has a smile to brighten up the room and his laugh is one of the best things I’ve ever heard,” Hester said.

With his special smile and laugh, this unsung hero with a red cape goes throughout each day on a mission to serve and care for his people, quietly and without much recognition.

However, Hester certainly recognizes his friend’s impactful presence. “Rick is committed to what he does, a very trustworthy man, but most of all, he is just a really great friend.”

Boyle Schools responsible for shining a spotlight on our community 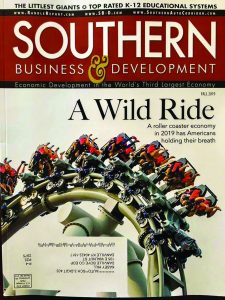 The Fall 2019 edition of Southern Business and Development Magazine explains the positive community impact of the A+ rating given to Boyle County Schools by Niche rankings.

Recently, Boyle County Schools was rated one of the best K-12 education systems in Kentucky, as mentioned in Southern Business and Development magazine. This rating, focusing on small and medium-sized locations, originated from Niche.com, a research firm in Pittsburgh. Niche compiles rankings of school districts within each state and assigns a letter grade to those districts based on performance measures.

In the Fall 2019 edition, Boyle County Schools’ role in preparing students for the workforce was admired. First, the magazine commended Boyle’s partnership with Bluegrass Community and Technical College for post-secondary and career preparation for students. They also applauded the district’s offering of a Work Ethics Seal, as well as their entrepreneurship, banking and Big Rebel News programs. These programs were complimented for their overwhelming support of students who are preparing themselves for the workforce or higher education.

According to Lassiter, as the national workforce population continues to decrease, the number of available workers will shrink. With fewer workers in the workforce, Boyle County Schools strives to produce not only capable employees but highly skilled workers and problem solvers. Boyle County’s excellent educational programs will successfully equip graduates to become valuable and exceptionally productive workers.

Ultimately, this high-quality education referenced in this publication makes a difference for our local business community. “The magazine is read by site selection consultants that advise companies on the best locations for their business operations,” Lassiter shared.

From this rating, Boyle County Schools has contributed to making our community a more attractive place for business development. As more businesses look at Danville as a place to locate their facilities, more jobs will be available to citizens to grow our local economy.

Boyle County High School Principal Mark Wade recognizes the hard work that goes into such a rating. “My first thought is that I’m really proud of our school,” Wade said.

“I think it showcases the many offerings that students have been successful with. The desire, ultimately, is to prepare students for future success. This really pushes us as a staff to continually evaluate what we are offering, and what we are urging students to do, or to become involved with.”

Wade proudly expressed once more, “It is humbling to know that our high school, elementary schools, and middle school have done a phenomenal job in preparing students for their next adventure.” 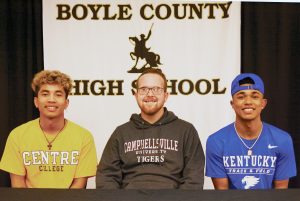 Reiley Colwick, Braydon Coffman, and Marquise Kinley are all smiles on Boyle’s most recent signing day where friends and family join to celebrate. (Photo by Alana Lassiter)

Football videographer Braydon Coffman signed with Campbellsville to film for the Tigers next season. Filming for the Rebels football team for the last five years, Coffman has been a key figure in the team’s success according to head coach Chuck Smith.

“Braydon was always early to practice, and he had the film uploaded to hudl (online performance analysis tool) immediately after practice for the coaches to watch and make improvements to the Friday game plan,” Smith said.

Going to Campbellsville, Coffman is excited to continue being a contributor.

“It feels like you never left home because Coach (Chris) Pardue is going (new offensive coordinator) as well as my brother and sister who are attending Campbellsville. So it’s like I never left home,” Coffman said.

Reiley Colwick, who has been a vital part of the Rebels football team over the last four years, signed with Centre College in Danville. Playing wherever needed, Colwick powered the team as a defensive back, wide receiver, kick returner and punt returner.

Colwick said, “The one thing that set Centre apart is that they wanted me and needed me. The other schools wanted me, but didn’t need me. Centre, as well, sets you up for life outside of football for things like education, family and jobs.”

Also signing was Marquise Kinley, joining the University of Kentucky’s track and field team. He will be contributing to the Wildcats in the triple and long jump events.

Kinley shared how he became involved with track. “In middle school, I played football and one of the coaches also coached track as well. He said I should come out and try it, and I did. I fell in love with it and I’ve done it ever since.”

Just this past summer at the Junior Olympic Nationals in North Carolina, Kinley placed first in the long jump and second in the triple jump events. As a result, Kinley is now officially a state champion, a national champion, and an All-American.