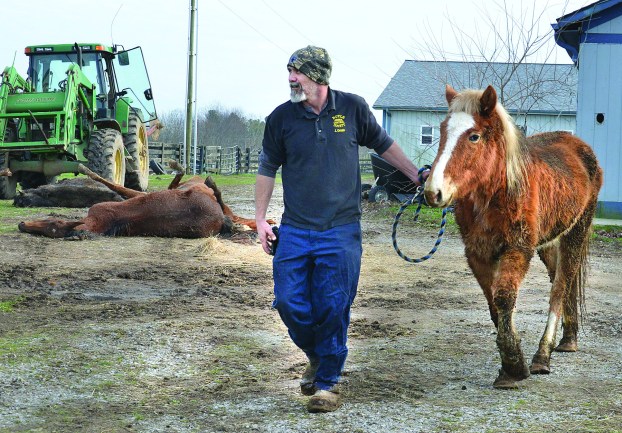 Boyle County Animal Control officer James Goode leads one of the 13 neglected horses from a barn where another horse had been found dead. The county is now looking for people who can foster the horses until the case it settled. (Photo by Robin Hart)

UPDATE: The horses are not available for fostering at this time. They are safely located and being taken care of by Boyle County Animal Control workers and other experienced volunteers. The horses will not be up for possible fostering or relocation until a court of law has determined the next course of action. Boyle County Animal Control appreciates everyone who has been willing to help.

After discovering 14 neglected and malnourished horses on a Boyle County farm Monday afternoon, the local Animal Control Department is now looking for people who can foster the animals until a pending court case is sorted out. And the county judge-executive expressed how upset he is by the situation, as well as bought hay for the malnourished animals.

On Friday, Kentucky State Police discovered a dead horse next to a barn at the corner of U.S. 127 and Faulkner Station Road when they were serving an eviction notice to the renter on the property, according to Boyle County Judge-Executive Howard Hunt. A person is leasing the barn and two lots, he said. 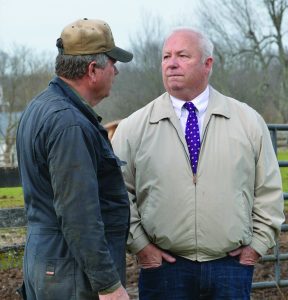 Boyle County Conservation District Board Chair Allen Goggin, left, talks with Boyle County Judge-Executive Howard Hunt after Goggin delivered three rolls of hay that Hunt had purchased for the neglected horses that were recently found in and around a barn on U.S. 127. Quickly stepping in and taking care of the the 13 horses “is a county collaborative effort between Hunt’s office, the humane society, animal shelter and Conservation District, Hunt said. “That’s what we do here in Boyle County.”(Photo by Robin Hart)

As Monday evening, officials said the person they expect to charge  had not been served with an arrest warrant, but it was expected to happen by Tuesday afternoon.

A veterinarian was also called to the farm and decided that one of the horses inside the barn should be euthanized, said Boyle County Animal Control Officer James Goode. The carcass of a third horse was also inside a stall, where it had apparently been for some time, Goode said.

None of the horses are over four or five years old, he said. 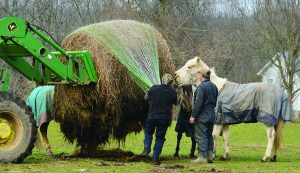 After Allen Goggin, right, delivered a roll of hay, and before animal control officer James Goode could pull the netting off, several horses trot up and begin eating. (Photo by Robin Hart)

Monday afternoon, local farmer and board chair of the Boyle County Conservation District Allen Goggin brought in three rolls of hay, purchased by Hunt. Before he could unload the first roll, a few of the horses that were in the muddy lot trotted up and began eating.

The other horses were led one by one outside to the field, where a couple of them galloped and pranced around before eating. One of them first rolled in the mud.

Hunt said because law officials have stepped in, the horses are now the county’s responsibility. That’s why they are searching for people who have a couple of acres and can feed and water the horses until the situation is settled. Foster farms may then have the opportunity to adopt the horse that they take care of, he added. 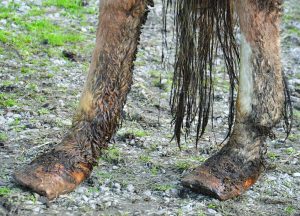 The hooves of one of the horses are so badly foundered that it makes it difficult for the horse to walk. (Photo by Robin Hart)

Hunt said this alleged cruelty to animals should never have happened. “Anybody can ask for help. If they need help in taking care of their animals, give us a call,” Hunt said. “Don’t let it get to this point.

The three rolls of hay will only last that many hungry horses for about two days, Hunt said. If anyone would like to foster a horse on their property or donate hay, feed or money to help pay for food and veterinary expenses, they can call the Animal Control at (859) 238-1117 or Judge-Executive Howard Hunt’s office at (859) 238-1100.

A longtime employee who previously came forward about a grievance she filed against the city’s mayor has now filed a... read more