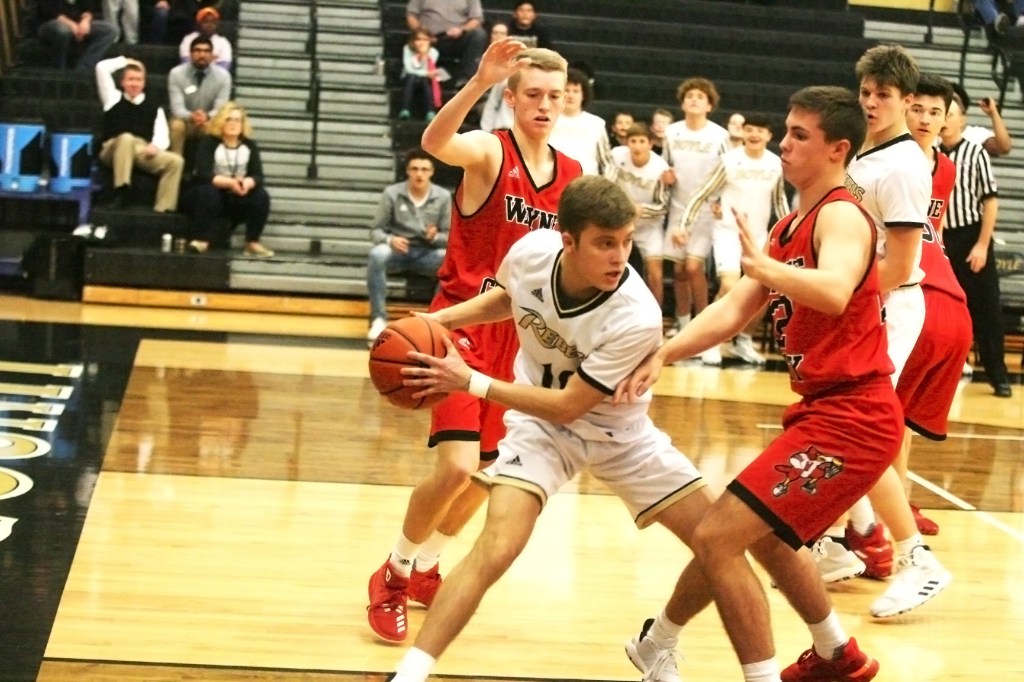 Maybe it was the energy from honoring the seniors before the game. Maybe it was the bitter taste from the loss on Monday to Pulaski County. But Boyle County came out red hot to start Tuesday night’s 51-40 win over Wayne County.

“We started out great. Scored 20 in the first quarter. High energy and we were just playing and going after it,” head coach Dennie Webb said.

The Rebels scored the first eight points of the game and forced the Cardinals to burn through a timeout less than two minutes into the game.

By the time the period was done, the Rebels had jumped out to a commanding 20-9 lead. That lead grew in the second quarter, but it wasn’t a good period for Boyle by any means.

“We went through a little lull there in the second quarter like we usually do,” Webb said. “We started taking shots a little quick — maybe not the best of shots. We went through some stretches where we just had a hard time putting the ball in the hole.”

Boyle managed only eight points in the quarter, but held Wayne to only seven to take a 28-16 lead to the half.

The Cardinals came out of the half with the same energy Boyle started the game with and clawed themselves back into the game — outscoring the Rebels 18-9 in the quarter to cut the lead to 37-34 heading into the fourth.

“Only scoring eight and nine points in the second and third quarter — you’ve got to be playing good defense when you put up those kinds of numbers,” Webb said. “And we did. We played good defense. That’s a team that’s been putting up a lot of points and shoots the lights out. We didn’t allow any of them to score in double figures. That’s something we can commend the guys and they can hang their hats on. They did what we asked them to do.”

Never was that defense better than to close out the game. The Rebels put up 14 points in the final period and held the Cardinals to only six to pull away for the win and send the crowd home happy.

Junior Luke Sheperson led the charge for the Boyle defense. He blocked four shots for Boyle and hauled in as many rebounds.

“He altered a lot of shots too. He did a really nice job on who I think is one of their best two players — (Thomas) Spencer — he did a nice job on him,” Webb said. “He stayed with him, kept between him and the goal and got physical with him. He did a great job rebounding and he always does. It’d be nice if he’d make a few more of those field goals around the bucket but you just can’t fault his effort there.”

With leading scorer Luke Imfeld out Tuesday with an ankle injury, Boyle needed someone to pick up the scoring effort and that came from freshman wing Owen Barnes who led the team with 20 points on 7-10 shooting.

“Owen does such a nice job of getting to the rim and getting offensive rebounds. He’s getting smarter about when to go and attack the rim,” Webb said of the first year player. “We’re trying to get him out of shooting those step-back 18-footers. Tonight he made a lot better decisions than he had been so I’m proud of him for that. Maybe one shot there I’d disagree with him on, but the kid is gritty and he comes out to play. If we can get him to do it all the time, he’s going to be something special.”

But the night was about saying goodbye to the senior class. Gentry Brummet, Karson Thompson and Grant Hotchkiss were honored before the game.

“You’ve got Gentry — he’s been with us a couple of years. He doesn’t get a lot of minutes, but he’s a big leader for us. I’m proud to death of him,” Webb said. “I’m just glad we could get him some clock. He’s here on time every day, he’s always the last one to leave. He picks up the kids and fits into his role. That’s the kind of selflessness we want in our program and he’s the epitome of that. He’s dedicated and committed. So are the other two. Grant and Karson have been coming up big for us this year. We’re young outside of those two, for the most part. They give us an older presence who can calm people down sometimes. I’m trying to Grant to be more outspoken sometimes.

“They’re great kids, too. I was checking GPAs today and they’re kids that are getting it done in the classroom too,” he added. “They’re embarrassing me with their GPAs when I think about what mine was in high school. They’re doing it all. They’re good kids in the community and on the court and in the classroom. You love having kids like that as seniors. You just hate to see them go.”

Boyle hosts Clay County on Thursday for its last game of the regular season. They have a first round bye in the district tournament held at Lincoln County.