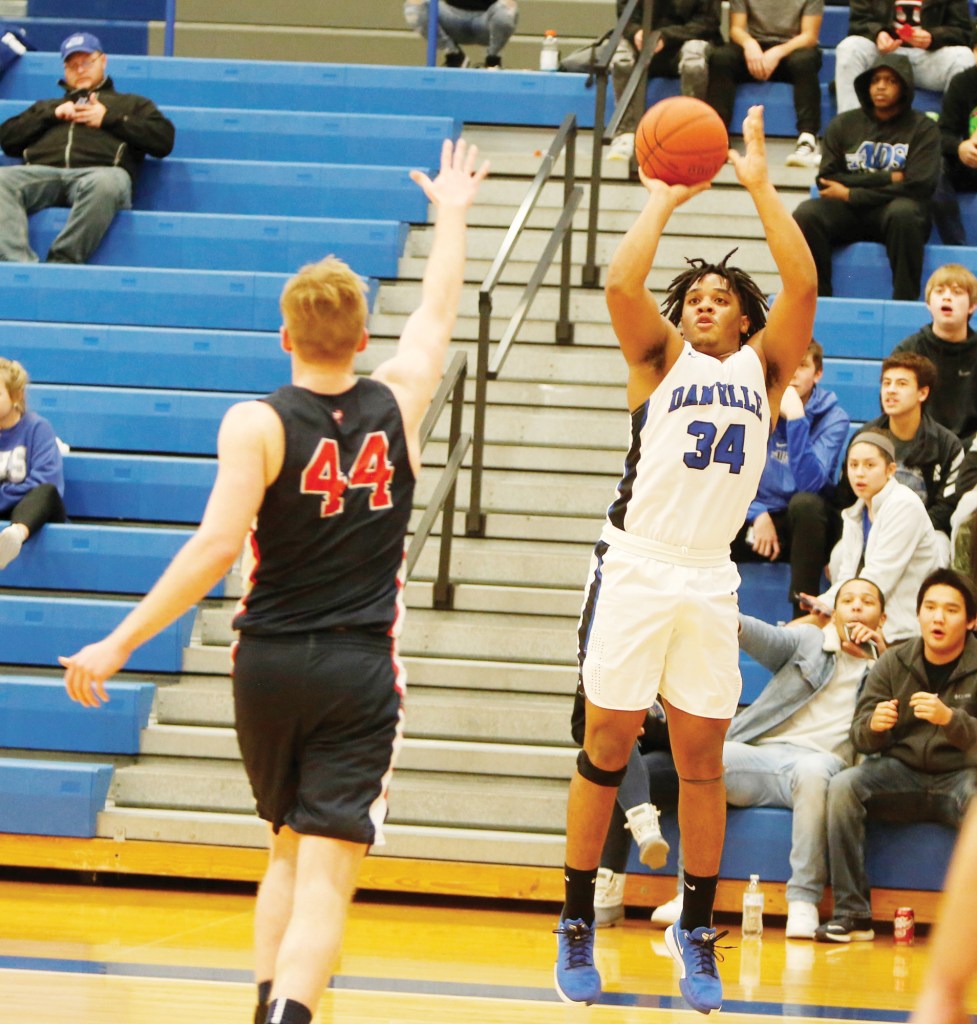 Darrian Bell (34) of Danville gets off a 3-point shot before Russell County defender Scott Hamm (44) can reach him during the third quarter of the Admirals’ 74-45 victory Tuesday. Bell led Danville with 16 points. (Photo Mike Marsee)

The difficult games Danville is playing in the final days of the regular season are important to prepare the Admirals for the postseason, but games like this one have value, too.

In the midst of a particularly tough part of an arduous schedule, the Admirals got a chance to relax Tuesday night in a 74-45 romp over Russell County.

Danville is closing its schedule with five games in eight days, four of which are against the teams that had the four best records in the 12th Region entering Tuesday’s play. Right in the middle of that was a game against Russell, which is struggling to get to .500 in the 4th Region.

The Admirals lost at Lincoln County on Friday and at Pulaski County on Sunday, and they’ll close the regular season with back-to-back senior night games – Somerset’s on Thursday and their own Friday against East Jessamine.

“Our schedule has been pretty tough, and then when you finish up the season with three of the top four teams in the region on the road … and then we come back with East Friday, and they’re one of the top four or five teams in the region,” Danville coach Ed McKinney said. “(This game was good because) everybody gets in, everybody gets to participate, the ball’s going in the basket, we get a good vibe going.”

Danville (18-10) rolled over Russell (13-15) behind 52 percent shooting from the field. The Admirals went 16 for 28 from the field in the first half and finished 31 for 60 as they inched closer to reaching the 20-win mark for the second consecutive year.

Twelve different players scored for Danville, led by Darrian Bell with 16 points and Trey Dawson with 10.

“I thought everybody played well,” McKinney said. “I think our defensive intensity was good. We were after it, we made a lot of plays, we turned a lot of defense into offense.”

That happened on three of the four baskets in an 8-0 run that allowed the Admirals to open a 16-7 lead in the first quarter and on four of the five buckets in a 10-0 run at the end of the second quarter that gave them a 38-21 halftime lead.

By the middle of the fourth quarter, McKinney was emptying his bench and players who seldom see action were getting not only minutes but baskets for Danville, which got 28 points off its bench.

Drysten Turner, Sage Dawson, K.J. Stanfield and Corey Zeznanski – a senior who delighted the student section when he sank a 3-point shot right in front of them – were among the reserves who scored as the Admirals extended their lead to as much as 22 points.

McKinney said the guys who are part of the regular rotation enjoyed that almost as much as those who were on the floor.

“They love that. They root for those guys. They love to see them get in, because they know sometimes in tough games those guys have to sit over there and root for them,” he said.

He said it was also good to give his players a bit of a break at the end of a long season.

“We’re in our 28th game, and I don’t think we’re into load management – this isn’t the NBA – but there is some of that,” McKinney said. “You get beat down by all these games.”