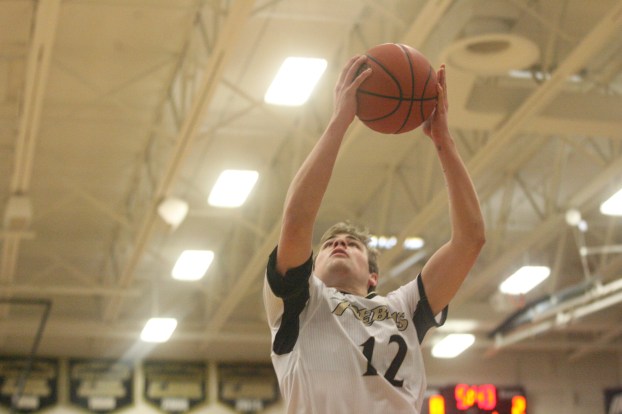 Grant Hotchkiss has had to deal with injuries since before this year to get to his Senior Night. (Photo Derek Brightwell)

Before the season, Boyle County coach Dennie Webb didn’t think he was going to have Grant Hotchkiss to honor on Senior Night.

Hotchkiss’ football career was cut short before his 12th grade campaign because of shoulder injuries. Webb knew that his future was on the diamond, and was preparing for a year without him.

But on Tuesday night, he walked out on the court with his family and was honored with the other two Boyle senior basketball players.

A couple of times this year, it looked like Hotchkiss might not have made the right call. Earlier in the year, he missed games because of the flu. Recently, he’d been playing with a mask on after taking a kick from Luke Sheperson to the face and breaking his nose. And a week ago, he rolled his ankle and missed games with that.

“He’s fought through a lot the last couple of years,” Webb said. “He dealt with his shoulders and now his ankle. Some of that stuff, like the ankle, that happens. That’s a common injury. He did get roundhouse kicked in the nose by Sheperson in the Southern game. But you can’t fault his toughness at all because he’ll keep coming at you. To battle through the shoulder injuries he had showed a lot of toughness.”

Through all of that, he’s persevered. He’s currently the fourth leading scorer on Boyle County — both in per game and cumulative — despite only playing in 18 of the team’s 23 games.

He’s also the team’s third leading rebounder on a per game basis — by only two tenths of a board — and fourth overall.

He handles some point guard duties, but more than anything, he acts as a coach on the floor. When in the halfcourt sets, it’s Hotchkiss who’s putting the guys in the right spot and starts the play. On defense, he’s the guy picking up his teammates.

It’s not easy for Webb to hide the fact that he is really glad that Grant Hotchkiss decided to come back for his final year.