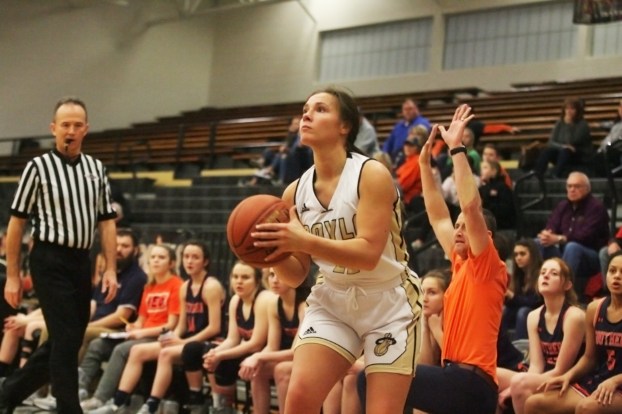 The result wasn’t what he would’ve wanted, but the process the gave Boyle County a chance to win late in the fourth quarter is very encouraging to Ryan Wiersma.

The Rebels took a punch in the mouth to open the game Tuesday night. After the first quarter ended, the score was Madison Southern 15, Keely Bowling eight.  Nobody else on Boyle County had managed to score and the Rebs trailed by seven.

After that, Boyle County stayed close to the Eagles, only being outscored by one in each of the next two quarters and getting the better of them in the final period. But it wasn’t enough and Madison Southern spoiled Boyle’s Senior Night with a 59-51 loss.

Still, Wiersma knows the goal is next week.

“We had a couple of silly errors down the stretch. It’s nothing that we can’t fix for next week,” he said. “Last week we talked about we’re getting ready for the district tournament. Tonight we showed a ton of grit and a ton of heart. I’m incredibly proud of how the ladies fought back. They did a great job. If we make a few more plays, knock down a few more free throws, it’s a different ball game and we can fix that going into next week.”

Bowling — one of Boyle’s four seniors — led the way for Boyle with 20 points, knocking down four 3-pointers as well as pulling down three rebounds, dishing out a pair of assists and coming up with a couple of steals.

“Keely showed incredible grit again. She fought every single possession,” Wiersma said. “She went out there and did a lot of things for us to come up with this win but we just came up a little short.”

As Boyle was mounting a comeback effort, another senior, Alyssa Wray came down wrong on a rebound — one of her 12 on the night — and had to leave the game with a sprained ankle. After that, it felt like the wind had come out of Boyle’s sails.

Still, Wiersma is proud of his quartet of seniors. Despite being his first year on the sidelines, he’s developed relationships with all of them. During the post game interview, he stepped away to console Wray who was feeling the effects of her ankle injury.

“I’ve had Alyssa in home room for two years and have really gotten to know her. I’m so proud of her. She’s fought through a lot,” Wiersma said. “She’s overcome a lot and learned the game of basketball a lot this year. Kelsea Hinkle came back to the team this year and showed a lot of leadership. Maddiei Baker is just a warrior and a fighter. Keely Bowling is just an elite shooter. The intangibles have been there this year and we’re just hoping that it’ll lead to some more wins now.”

Despite coming up short, Wiersma believes that the late game surge will provide some energy for a team that has not won in over a month as they prepare for the district tournament.

“We can build on this,” he said. “This is something we needed. We needed some momentum going into next week.”

Boyle takes on Danville Christian in the first round of the district tournament at Lincoln County. Tip off is at 6:00 p.m. on Monday, Feb. 24.

The difficult games Danville is playing in the final days of the regular season are important to prepare the Admirals... read more