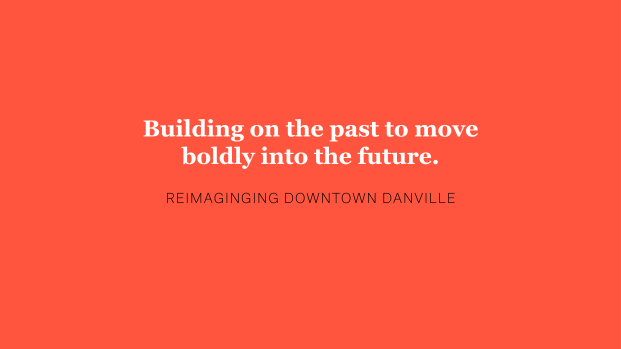 Danville residents will have a chance tomorrow to have a say in future planning for their downtown.

As part of the development of a master plan for downtown Danville, a team of consultants from Bravura and Gersham Smith will be in town on Wednesday, Feb. 19, beginning at the Hub Coffee House and Café at Third and Main at 7:30 a.m.

At 10:30 a.m., the team will head to Centre College, where they will be stationed in the student center outside Cowan Dining Hall. Then, the team will be available at the Boyle County Public Library from 2 to 5:30 p.m.

The master plan team encourages everyone to stop by at any of the three locations and times to offer their thoughts on downtown Danville.

The public input meetings are part of an eight-month process that got a boost last year when a “smart growth” conference was held at Centre College, according to a project schedule. They are part of phase one of the “Reimagining Downtown Danville” project.

Phase two of the project is slated to begin in March and involves coming up with design alternatives for downtown and further “stakeholder engagement,” according to the project schedule.

Phase three is scheduled to occur between May and June. It will “focus on final development of the downtown plan, prioritization of projects and development of an implementation plan to kick-start the process,” according to information from the project team.

The study area for the project is focused roughly on the east-west corridor of Main and Walnut streets between the old Jennie Rogers Elementary School and Maple Avenue; and the north-south corridor of Third and Fourth streets between the Broadway and the Fourth Street hill. Additional sites nearby are also part of the project, including Kentucky School for the Deaf, the Boyle County Public Library, Bate Middle School, Michael M. Smith Memorial Park and Norfolk Southern’s rail line. 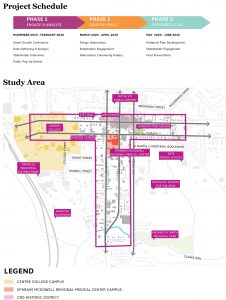 At the smart growth conference in November, Madison Silvert said talent and economic activity both “will follow quality places,” which is why it’s important to make downtown Danville more people-friendly than car-friendly, for example.

“The key is to be this region’s small-town center of gravity,” said Silvert, a Centre College alum and president of the Malcolm Bryant Corporation, which recently invested in downtown Danville by purchasing the Hub building. “There are people that want to be in a small town. But they can’t be in every small town. They’ve got to choose. What are the amenities that we are going to create in Danville, starting today with this discussion, that are going to make sure this is the kind of place where the brain boomerangs come back, where people want to live?”

Louis Johnson had some ideas about how Danville can accomplish those goals. Johnson is a landscape architect with Gresham Smith and a member of the team from Bravura that has been hired to complete a downtown master plan for the City of Danville.

Johnson said he likes a brief definition of “smart growth” provided by Ned Crankshaw, chair of the UK Department of Landscape Architecture: Smart growth is “more of what we love and less of what we don’t.”

The people who need to be involved in deciding what downtown should look like is “really diverse,” Johnson said — it includes city residents, students, businesses, county residents, farmers, migrant workers, tourists …

“Part of this story is how do we pull people in and make this the center of gravity?” he asked.

This story has been clarified to reflect that the smart growth conference held in November was not organized by the consultants holding public meetings in Danville on Feb. 19.

Tonight’s Danville Schools Board of Education meeting will be held at 6 p.m. at Hogsett Primary School cafeteria, not at... read more