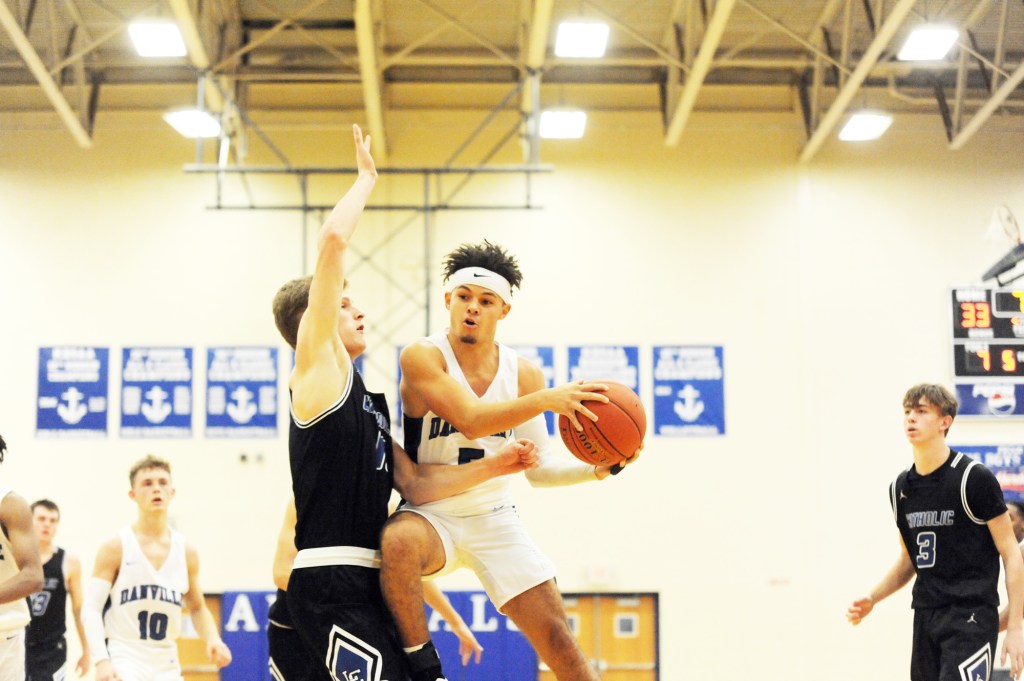 For Danville junior Dante Hayden, scoring his 1,000 point was something that he has been working for since his freshman year.

“You don’t see a lot of kids that are ready to play varsity as a freshman but he definitely was,” Danville coach Ed McKinney said. “He’s a great scorer. He shoots it, finishes it and can make the tough shots. He was definitely ready to play as a freshman and that’s not something you see all the time. I think he averaged close to eight his freshman year — that’s a pretty good start.”

He averaged 7.3 points per game in his first year as an Admiral, totalling 212 points. As a sophomore, he was the team’s scoring leader, averaging 12.4 points per game for a total of 434 points on the year.

“He’s obviously been a big player for us the last three years,” McKinney said. “He’s competitive, he just wants to win. He was a big part of our success last year and obviously this year.”

But Hayden’s milestone moment was spoiled slightly by crosstown rival Boyle County. While it was extra sweet for him to score that point in their gym, the Rebels had the last laugh by winning the game.

‘That added everything to it. It made me feel excited to get that point at Boyle County High School,” Hayden said. “I was hoping we’d get the W to top it off. But that’s not the way our cards fell.”

“In the Boyle game, I wanted to pull him out when he got it. I knew how many he needed. But we were in the heat of the game and it was a close game in the first half,” McKinney said. “I didn’t get to do what I meant to — I wanted to take him out so our kids could recognize it. But the game was so close we couldn’t do that. I told him that I was proud of him and that it’s a heck of a milestone and now we’re on to bigger and better things. But he wants his team to win and that’s at the top of the list.”

Now that he’s crossed that threshold, Hayden said that he can relax a little more on the court for the rest of his junior season and all of his senior year.

“No more point chasing for me. I feel like I’ve taken some ill-advised shots over the years to try to raise my point total a little bit,” he said. “No more of that — just going to play smart from now on. Glad I got that off my back.”

“For some reason, it’s that 1,000. If you score 998, you view yourself different than if you score 1,002,” McKinney added. “We’ve made it a big thing in basketball — college and high school — and it probably does take a bit of weight off of you.

“But I don’t think you could tell by watching him that he was hunting it,” McKinney added. “He’s had games this year where he’s deferred to other kids. He’s always tried to play within the team concept, which is something that I think is really good about him.”

Both McKinney and Hayden know that you don’t get to 1,000 points without some help along the way.

“Guys like Zach Thornton and DeShaud (St. Martin) last year and Darrian (Bell) and Trey (Dawson) this year — they’ve deferred to Dante,” McKinney said. “We haven’t had any issues with that. You’ve got to have teammates — especially when you’re a freshman and sophomore — that are willing to help you. Some seniors might think ‘Well, it’s my time to shine’ but we’ve never had that here. Those guys have been instrumental to Dante getting to 1,000.”

But when you’ve been an elite scorer for three years, other teams are going to make those teammates beat them.

“Other teams know that and he gets a lot of attention, they’ll take stuff away from him. There’s games where he has to be patient,” McKinney said. “Obviously people scout and they’ve got their game plans and he’s someone you’ve got to game plan against. He does a good job of being patient and letting the game come to him.”

McKinney said that what makes Hayden special is his willingness to defer to his teammates when the opponent has keyed in on him.

“We’ve never individualized the game of basketball more — at all levels — than we do now. The team aspect gets harder and harder to convey for the coaches,” McKinney said. “All of the social media and the way games are watched — there’s just so much hype around individuals. You’ve got to keep the fact that it’s a team game in your mind — players and coaches. Dante does a good job of that.

Danville has had great players come through that didn’t quite get over the 1,000 point mark. McKinney points to players like Thornton and St. Martin last year as examples of that.

“Sometimes that’s the result of having a lot of good players. It’s easier to score 1,000 when you’re the guy and don’t have a lot of great players around you,” he said. “When you’ve got a real good team and the points get spread out, sometimes it’s just the function of a lot of different things. Sometimes the better team that you’re on — DeShaud (St. Martin) and Zach (Thornton) I think each had in the 900s and they were very good players.”

But for Hayden, the milestone is the culmination of all the hard work he’s put into the game of basketball.

“It’s just crazy. I was thinking about the hard work I put in and the amount of times I’ve failed and cried and stayed late after practice,” he said. “Just working on my game to try and become better. It’s been a tough career here at Danville High School. Teams try to shut me down, so every time I step on the floor, it’s tough for me to score. I’m just very thankful to score 1,000 points here and be a member of that club.”