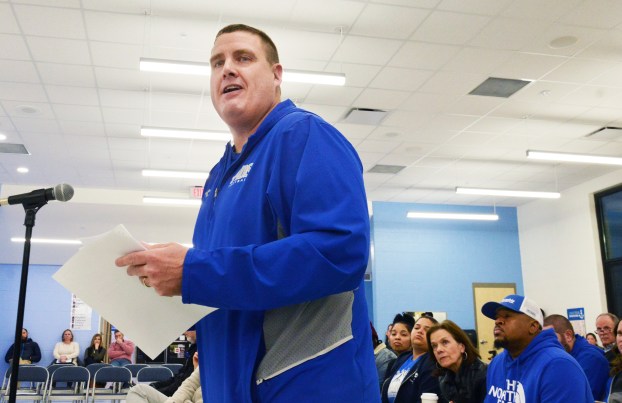 Danville High School Head Football Coach Clay Clevenger talks to the Danville Board of Education in defense of not cutting stipends for the football program. (Photo by Robin Hart)

Danville school board criticized for possible cuts to football funding

During the Danville School Board meeting Tuesday night, several people voiced their opinions about the potential termination of the partnership between Wilderness Trace Child Development Center and the district, and possible budget cuts to the Danville High School football program.

However, the board approved an amended agenda because WTCDC had asked to withdraw from the agenda due to “the loss of a very good friend,” said Board Chair Steve Becker.

The board then approved a special called meeting for 6 p.m. Wednesday, Feb. 26 at Hogsett to discuss only the WTCDC partnership with the Danville School District.

Patsy Clevenger came prepared to give a Powerpoint presentation to the board showing figures of proposed budget cuts that would affect the high school football program and what other similar independent school districts pay. However, Becker told her that the board’s policy was to only allow the public to speak for three minutes.

She gave the board papers that showed the proposed cuts for football was in the amount of $5,900 stipend for a full-time assistant coach and a $6,500 stipend for the weight room programer. Other proposed athletic cuts, which total $114,280, include $2,500 for a football game manager.

Clay Albright talked about the money that the football team had generated for the district through gate receipts and “bowl money” and playoffs. He said in 2018, the team brought in about $19,000. However, because of new rules in 2019, the district “took half” of what tickets sales generated, which left the football program keeping about $9,900.

“We already took a big hit there. Had they followed the prior policy, the revenue just off the gate alone, would have been over $22,000,” he said. “… What we’re trying to show you (is) there is plenty of money being brought in and diverted over to the school.”

Joey Kirk told the board that “football is a big part of this town. It’s who we are.” His main concern was about cutting the stipend for the weight room. “In the past 50 years, we have won 10 state championships, three runners up, and numerous regional titles, and they all began in the weight room — which has been named the Swain Strength Training Facility.”

“The weight room still teaches the laws of the harvest,” Kirk said. “The process takes time and effort. … If you put in the work, you’ll reap the benefits. When kids learn to internalize the process, it becomes more valuable than championships or any state rings.”

He also said seven years ago, the district was paying more stipends than it is today. He said by looking at the figures presented by Patsy Clevenger and Albright, “if we’re (the school district) having financial troubles, it’s not on the backs of our athletic program. I think programs that directly affect kids, and directly affect some of our most at-risk kids, especially our young men, be careful about cutting them (athletic programs) because it will lead to things in society that we don’t want to go down that road.”

After the meeting, Clay Clevenger said the proposed cut of the $6,500 stipend for the weight room coordinator “actually goes to the head coach, so it would be a cut on my salary.” His staff would also lose a full-time assistant coach if the position’s $5,900 stipend is cut, too. “I think the football program around here is important, and it’s important to be able to be funded and be able to get good quality coaches and a good quality program.”

LaKeysha Singleton was more confrontational when she addressed the board about several of her concerns.

She said the board has “failed miserably” in being good, strong leaders for the school district.

“You were elected to be committed to being good stewards of the district’s resources and to put the needs of our children first and help each of them succeed,” she said.

The board was obligated to not “rubber stamp” the superintendent’s recommendations of raising property taxes and dissolving the partnership with WTCDC, she argued.

“The mere suggestion (of ending partnership with WTCDC) as a means to save money, to the detriment of those most fragile among us, is shameful and it’s embarrassing,” Singleton said.

She asked the board how it could justify raising taxes and approving budget cuts, “while approving raises for the administration.”

She criticized the board for buying the district’s new central office building, paying the superintendent $138,000 and recently creating a new assistant superintendent position.

Singleton refused to stop speaking after her allotted three minutes were up and she continued to address the board over Becker’s tapping of the gavel.

Once everyone who requested to speak to the board was finished, and Superintendent Tammy McDonald began updating the board on other matters, most of the crowd noisily got up and left the meeting as she was talking.

After the meeting, Becker said the board was trying to find ways to cut about $900,000 out of the next budget, in order to help the district get on more solid financial footing.

“And the athletics is a real small part of that,” he said. “Folks need to know we have not made any decisions. Everything is on the table. It’s going to be up for discussion.”

Editor’s notes: This is the second in a series of stories about David Milliron, Danville’s new city manager.   When... read more