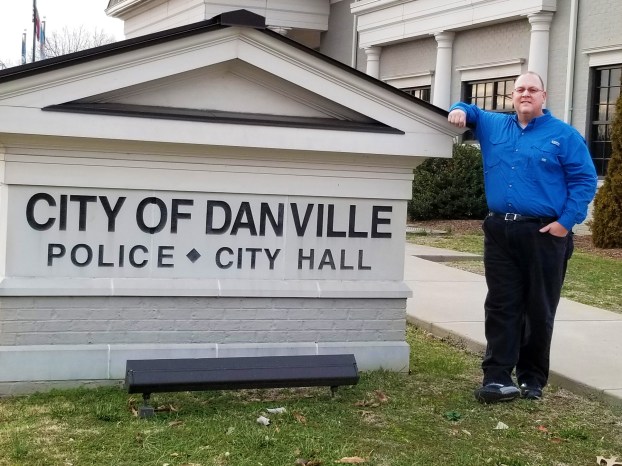 Editor’s notes: This is the second in a series of stories about David Milliron, Danville’s new city manager.

When David Milliron applied for the job as city manager of Danville, he was serving as city manager for Hogansville, a small town about an hour outside of Atlanta, and working long hours.

“My wife asked me, ‘You don’t know anyone in our community, do you?’ I was working day and night and weekends, and was on the road. I didn’t know anyone where I lived.”

Then, the position with the City of Danville “pops up on the radar,” he says. His wife, Barbara, actually asked him about it, because his sister has family in Kentucky.

“I told her, ‘I know Danville,’” Milliron says. He had driven through once while attending a conference in Lexington. “It is beautiful, and Centre College is there, which is equivalent to Emory,” a private university in Atlanta, he says he told his wife.

Milliron spent more time researching Ron Scott, the former city manager he has now replaced, than anything else.

“Then I started looking at the newspaper archives, what was going on … what projects, looked at the demographics of the community,” he says.

Plus, his wife loves the seasons. Although they’ve been in Georgia for a while, she’s from upstate New York, while Milliron is originally out of south New Jersey.

When they visited, they “pretty much instantly fell in love,” he says, but tried to stay below the radar the best they could. He visited area businesses, restaurants, even city hall, before letting anyone know who he was, or that he was considering the move.

“And when we came in for the actual interview, they took us on a very detailed tour,” he says. “… This was one of the most professional recruiting processes I’ve gone through.”

One of the first things Milliron says he’s taken in about Danville is that “we have a housing shortage — can’t get workforce. If you can’t get a workforce, you can’t get industry. Let’s make sure our cart’s not before the horse.”

He says he has been unable to find a home at the appropriate cost, and will be renting the home out on the Tuggle Road land the city bought for its new water tower.

Milliron says he got to know the community through news reports and following meetings. He says he likes that “everybody got along, which is important … That doesn’t mean they always agree with one another.”

‘Spaghetti at the wall’

He says now that he’s here, he encourages discussion through team building with the city staff. Milliron says it’s important that within an “HPO” — which stands for high performance organization — it’s realized that “everybody brings something to the table — the diversity in the opinions at the table. We can throw spaghetti at the wall together, and be hard on the issues but not each other.”

After the annual city retreat, where Milliron used a facilitator to lead management staff and the city commission on a brainstorming journey, he said he was very pleased with what the group ranked as its top priorities. “I was happy to see what they put up there … because we’re aligned.”

Milliron realizes he has a tough job to dig into, with pension and health-care costs rising.

“That’s the only way to move the city forward. The commission can go out and raise taxes, sure. That’s a solution, but not a popular one. So before we can move forward, what are the priorities of the commission? How are we, as staff, going to meet those, and move it down the rank so that everybody knows what they’re responsible for and what is smart work? How does their role contribute to the overall goal and vision of the city?”

Milliron says he’s been doing lots of interacting, but also listening. He recently spent half a day with Public Works. He says many don’t get how important their role is, and how it reflects on the community daily.

He says he asked the workers, “‘Do you realize your role translates to economic development and vitality and success in the community?’ Their role is important, maybe someone hasn’t explained how or why …”

Milliron also began a new monthly breakfast, where he takes everyone out together who has a birthday in that month, resulting in people from different departments mingling that usually don’t see each other in a day’s work.

“We have a job to do, but we can also have fun doing it,” he says. “We start to learn when I can relate to you on a personal basis. There are things going on in everyone’s lives …”

He says the No. 1 thing those in management try to achieve is “to understand empathy and make personal connections. Folks leave supervisors and managers, they don’t leave the organization,” so he’s attempting to build bridges between the staff and team.

Another goal of Milliron’s is better communication to the public about city services. “What does the average person pay for public safety? Is it equivalent to a Happy Meal, or a family of four out to the movies? I like to draw those analogies and put it into perspective, so people understand where your money is going.”

He’s also put out an RFP for solid-waste pick-up, and is looking at “potentially doing it more effectively and efficiently than we have in the past.”

He says he’s spoken with county officials about how they handle solid waste.

“Because if we work together, then we’re headed in the right direction. If we team up, we’re a lot better at negotiating collectively.”

Quarantine ends for Centre students who traveled to China

The Centre College students who were quarantined last week have been cleared to return to normal activities. They were... read more