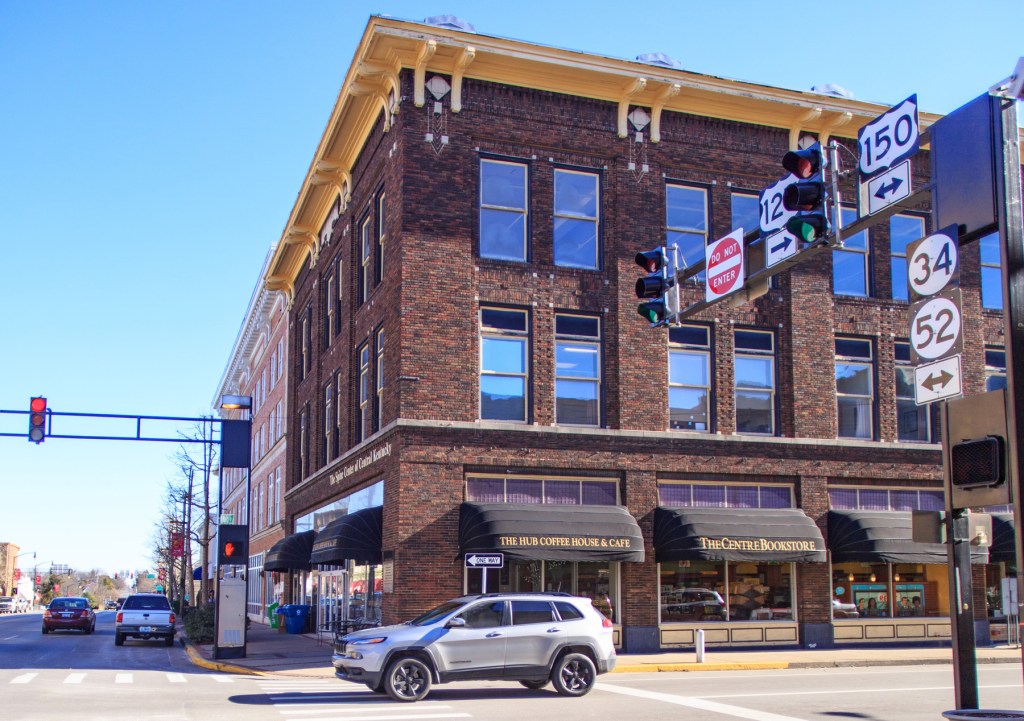 The Hub Building at the corner of Third and Main streets in Danville is home to the Hub Coffee House and Café and the Centre College Bookstore on the first floor; and The Spine Center of Central Kentucky on the second floor. The third floor is currently vacant. (File photo by Ben Kleppinger)

The Hub Building in downtown Danville was home to the iconic Hub Frankel department store until 1995. It is known today for its coffee house and college bookstore. Now, Centre College hopes to make it known for something new: It plans to turn the third floor into a center for entrepreneurship and education, with potentially far-reaching effects for the larger community.

The center could feature a “maker space” with 3D printers, a large-format 2D printer, virtual reality equipment and design-software-equipped computers; a boardroom and meeting rooms for use by Centre and the community; a kitchen with a full complement of appliances; modular and movable furniture; whiteboards and glass walls; high-speed wireless internet; videoconferencing abilities; and multimedia screens.

Ellen Goldey, vice president for academic affairs and dean at Centre, told members of the Economic Development Partnership Wednesday that the project is Centre’s attempt “to reach into the community in a new and intentional way.”

“What we’re trying to accomplish here … is something that is there for everyone,” she said. 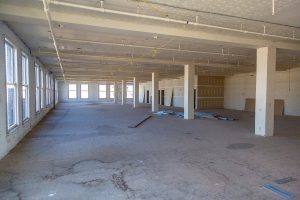 The third floor of the Hub Building in downtown Danville is currently just an open, empty space, but Centre College hopes to turn it into a unique space that could benefit education and entrepreneurial enterprises, among other things, in the community. (Photo by Ben Kleppinger)

Once open, the center could enable a wide variety of projects and initiatives by both Centre and local businesses and organizations. Possible uses, according to a prospectus for the project from Centre, include:

Members of the EDP board had glowing reviews for the proposed center.

“There’s going to be more life put back into that very important building that’s at the corner of Third and Main,” said Marty Gibson, EDP chair.

It’s remarkable how Centre is hoping to “go beyond just your students” with the project and assist economic development leaders with their goals, Gibson said.

One strategic goal for the EDP has been to create an “incubator” that would help encourage entrepreneurial activity and help those hoping to start new business; Centre’s plan would achieve that goal and then some, he said.

“This has solved a huge part of the puzzle for our community,” he said.

Danville City Manager David Milliron said he has been involved in two similar projects in other cities where he worked before, and both were valuable additions to their communities. 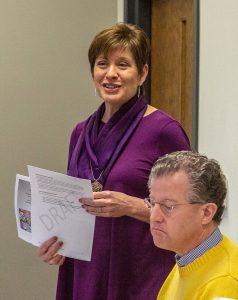 Ellen Goldey, vice president for academic affairs and dean of Centre College, presents draft plans for an entrepreneurship and educational center on the third floor of the Hub Building in downtown Danville to members of the Economic Development Partnership board Wednesday morning. (Photo by Ben Kleppinger)

Goldey said right now, the plan is for the company that owns the Hub Building, the Malcolm Bryant Corporation to renovate the third floor, and then Centre will rent the space.

Lots of possibilities for the center would be opened up if the community and surrounding counties could come up with funding to hire a full-time “business mentor,” who would work out of the center, Goldey said.

Goldey said the center could enable partnerships with local school districts and Danville’s Bluegrass Community and Technical College campus. For example, high-school students might be able to work together with BCTC students on ideas, use the center’s 3D printers to create and test their ideas, then take a successful test model over to BCTC and make it “full-size” using BCTC’s industrial equipment.

“We’re really trying to build partnerships in ways we haven’t in the past,” she said.

There are many examples of similar entrepreneurial spaces in other communities, including one at MIT. But Centre’s take on the same idea has real potential to succeed in a more rural area, Goldey said.

“I think that this is potentially a model for other private liberal arts colleges around the country, for that broad middle of the country,” she said. “So the coasts have what they see as sort of those innovation hubs, but there’s a lot of innovation throughout the rural part of this country, and I think that we could really be an exemplar in that regard and really celebrate the kind of work that we are all going to be doing together.”