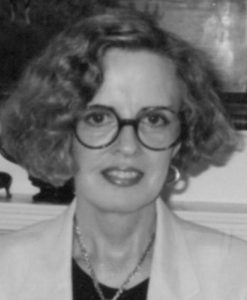 Gerry Lowrey Jackson, 82, died on Valentine’s Day, Friday, February 14, 2020. Born November 22, 1937 in Harrodsburg, she is the daughter of the late Gene Lowrey and the late Lucille Lay Lowrey (Sam) Ridgway.

In 1955, she was elected Harrodsburg High School Homecoming Queen. Thereafter, was a proud member of Kappa Alpha Theta sorority at the University of Kentucky and active in KAθ as a Sorority Mother at Centre College. Mack and Gerry shared a long life together until his death in 2005. She then managed the farm to the present.

Gerry had impeccable taste and loved all things beautiful, especially her gardens. She lived a full life, with a mixture of some sadness, but also with an abundance of joy. She cherished her children and adored her grandchildren. She was a loving wife, mother, and grandmother and will be missed dearly. In addition to her mother and father, she was predeceased by two brothers, George Lowrey and Mike Lowrey; a son, William Mack Jackson, Jr.; her husband, William Mack Jackson; and a brother-in-law, Chris S. (Sue) Jackson, Jr.

A memorial service will be 11:00 a.m., Saturday, February 22, 2020 at Trinity Episcopal Church, Danville followed by a reception for family and friends. Dr. Eric Mount and Rev. Amy Meaux will officiate. Memorial donations are suggested to the Ephraim McDowell House. The online guestbook is available at www.stithcares.com