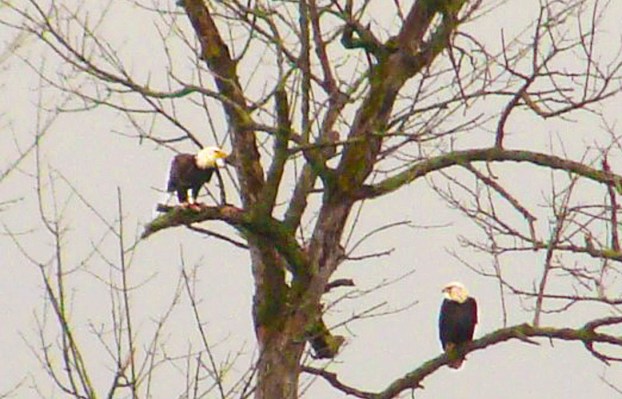 The winning photo of Theo and Leo was submitted by Ace Reeper of Perryville. Shannon Powers of Frankfort submitted the names in honor of Col. Theophilius Garrard, who was a U.S. Colonel for a Union Detachment that was engaged against Maney's Brigade at the Battle of Perryville; and Leonidias Polk, who was a wing commander for the Confederate Army during the same battle. (Photo by Ace Reeper)

Bald eagles named in honor of Battle of Perryville commanders

A pair of bald eagles that appear to be staking out Perryville Battlefield State Park for their nesting site have been given names — Theophilius and Leonidas — or Theo and Leo for short.

The Friends of Perryville Battlefield hosted naming and photo contests earlier this month and the winning names and photo were announced on Monday, said Friends member Joni House.

The winning photo of Theo and Leo was submitted by Ace Reeper of Perryville.

“The eagles are still hanging around and we believe that they are a mated pair and may be looking for an area to nest,” House said.

In an earlier story about the eagles at the park, House said the contests were “just for fun” and to raise awareness for the battlefield.

The Friends of Perryville Battlefield have worked for several years and invested hundreds of thousands of dollars to expand the park and convert it back to its natural habitat, House said.

“I am extremely proud that all that habitat work has helped to return our national symbol to Kentucky’s most hallowed ground.”

Editor’s note: This is the last of a three-part series on an interview with David Milliron, the City of Danville’s... read more