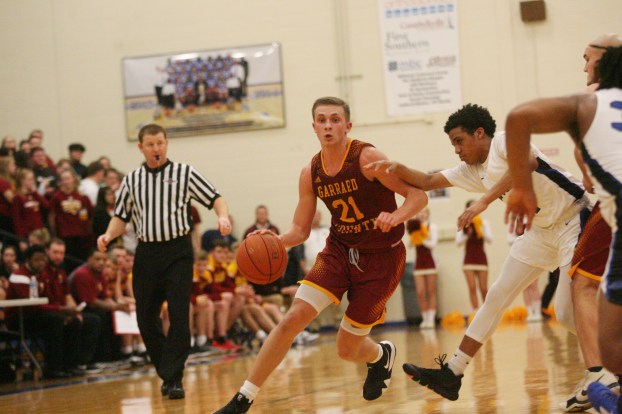 Coming into this season, Garrard County star Brayden Sebastian was making lists of players to watch. Not in the district, not in the region, but in the state. On Valentine’s Day, he fulfilled that hype and was named the Kentucky Association of Basketball Coaches 12th Region Player of the Year and a Mr. Basketball finalist — the first player from Garrard County to earn the honor from the KABC.

But early in the season, that path didn’t seem so clear.

Sebastian went down with a high ankle sprain after scoring 28 points at Wayne County in the second game of the season.

The Golden Lions lost that game and went on to lose 11 of their next 12 games.

“Obviously for me it created a lot of headaches. Going into this season, you kind of view it as reaping the fruits of your labor over the last three years,” Young said. “We’ll never see it, but however this season turns out it’s a huge regret for me not being able to see this team play together the whole season. I firmly believe that this is an 18-20 win team if he’s healthy all year and you can’t talk me out of it.”

But out of that darkness came light.

Both Sebastian and Young agree that — despite the record — the growth that a lot of the younger players on the team showed during that 12 game stretch was instrumental to where the team is now and where Sebastian is as a player now.

“Being out was obviously a growing pain for our young guys,” Sebastian said “Being back, I feel like the guys trust me and I trust them more. While I was out I saw that they can play — and can play without me. I think we’ve really gelled together better and it’s just going to make us a better team.”

“There’s always growth through the storm. Our kids were developing and competing but it’s tough to stay on the ship when you’re not winning basketball games,” Young added. “For (Brayden), personally, he was able to gain a lot of respect for his teammates seeing them battle and play hard. I keep talking to him about trusting them and being a total player and when you’re the best player you’ve got to help your teammates get involved and do a little bit of everything.”

But since coming back, it’s been a different Garrard team — the team Young expected to see all season long.

“When he came back was actually the meat of our schedule — our toughest stretch,” Young said. “If he’s there earlier, we win a whole lot more ball games. But it rejuvenates your ball club when you get your best player and your leader back.”

His first game back was at Western Hills. He scored 28. Against Madison Southern after that, 24. He had an off night against the district’s top team, only scoring seven points but atoned for that against Boyle County with 30 points.

But the defining moment of the season for Sebastian was against Danville on Jan. 27.

Trailing the Admirals at half, Sebastian led a second half comeback that saw him score the Lions first 13 points in the fourth quarter and finish with 47 on the night to lead Garrard to an overtime victory.

For Young, the relationship with Sebastian has been a special one. He was part of his first freshman class — one that he honored on Senior Night on Thursday.

“It dates back further than that. I’ve been in the program for six years. My first day here, we had an open gym in the summertime,” Young recalled. “We had this gangly, long seventh grader playing pick up with the high school kids. It didn’t take too long to see the offensive ability and the special talent that he was.

“It was a big factor for me in taking the job when I took it. I knew I’d have the opportunity to mold him and help him be a great player,” he continued. “It’s just been a great relationship between the both of us. He’s been a pleasure to coach. I hate that he was a little off with his jump shot tonight on Senior Night. Hopefully that just means he makes more next week.”

Even in missing 12 games in the middle of the season — Sebastian has been a special player for the Golden Lions.

When Boyle County boys soccer coach Chris McMann announced he was retiring to focus on teaching for the remaining years... read more