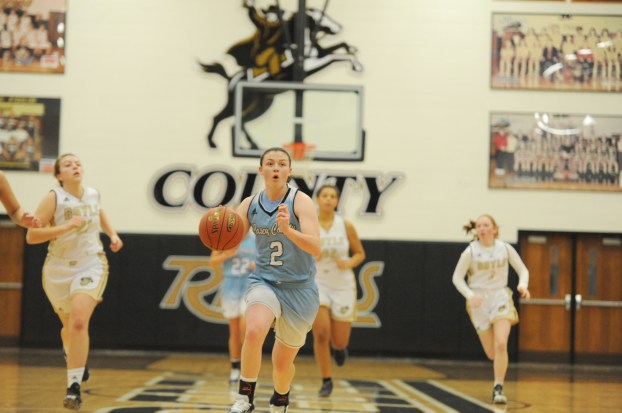 Going into this season, Casey County head coach Tara Weddle knew that it could be a special one for the Rebels. They returned everybody from last year’s team that finished runner up in the region and entered the year with seven seniors — three of whom had over 1,000 career points and one more who was approaching that mark.

Her expectations were well placed, as Casey currently boasts the best record in a loaded 12th Region. They’ve swept their district regular season games and are 11-1 in the region — the lone loss came by way of a triple overtime thriller on Valentine’s Day to Mercer County.

But before that game tipped off, the Rebels had already won twice that day. Weddle was named the Kentucky Association of Basketball Coaches 12th Region Coach of the Year and one of the seven seniors, Lauren Lee, was named 12th Region Player of the Year.

On Tuesday, another Rebel — Gena Cravens — was named the runner up Player of the Year.

“I’m not sure if it says as much about the program as it does about the girls,” Weddle said about the accolades. “It shows the effort and energy that they put into it — all that hard work. They’ve grinded it out for five years. They’re both very deserving.”

“I don’t think it’s as much me as it is what my team has done around me,” Lee echoed. “Going against some of the best girls in the 12th Region every day in practice has really helped me and developed my game.”

As for the COTY honor, Weddle thinks that might be a little overstated as well.

“Someone congratulated me on winning coach of the year and I just laughed and said ‘I’ve got seven extremely talented seniors, I just have to show up.’”

The depth that the Rebels have has been astonishing this year. Four girls on the team — Cravens, Lee, Natalie Duggins and Jordy Stephens — average in double figures and the fifth starter, Shaylah Wilkey is just a shade off, averaging 9.3.

Both Lee and Weddle believe that it’s that depth that allowed them to receive their honors.

“It’s hard to pick one or two to take away when there’s different weapons that can score. They’re going against each other every day in practice and it makes them that much better,” she said. “They don’t care who scores the points and you can tell that because there’s never any arguing on the court or at practice or in the locker room — especially not basketball related. Nobody cares. The only thing anyone cares about is if we have more points on the scoreboard at the end of the game.”

It also leads to highly competitive practices. At the end of practice on Thursday, the team was split into three teams of five for a drill and the best team on the court didn’t feature Lee or Cravens.

“Some days it just doesn’t go your way,” Lee said.

While the awards are nice, it’s never been what the Casey County team is about. Right now, the focus for Weddle and her squad is getting to the region tournament again.

“We don’t really look at accolades. It’s great to achieve milestones and to be recognized. For Lauren to win region player of the year is awesome and it’s very deserved,” Weddle said. “But we don’t focus on that. The only thing on our mind is Somerset Monday night. If you drop that game, region isn’t even in the question.”

“It being our last year, we understand this our last chance to get to go,” Lee added. “We’ve just got to be more focused.”

Lee knows that other teams are going to be focused on stopping her now, too. But she’s used to it because as the team has continued to excel on the court, opponents have been approaching them differently.

“We’ve definitely worn the target the last couple of weeks. When Mercer County came in the gym, you felt that target,” Weddle said. “We didn’t really play a lot of region games until toward the end of the year. It feels like every one we’ve gone to, I’ve felt that a little more than I’ve ever felt in the past — at least as a coach. Every team we’ve played in the region so far has been extra focused and extra prepared.”

“I like to think the players out there are always bringing their best game and that we’re going against the best competition.”

Coming into this season, Garrard County star Brayden Sebastian was making lists of players to watch. Not in the district,... read more