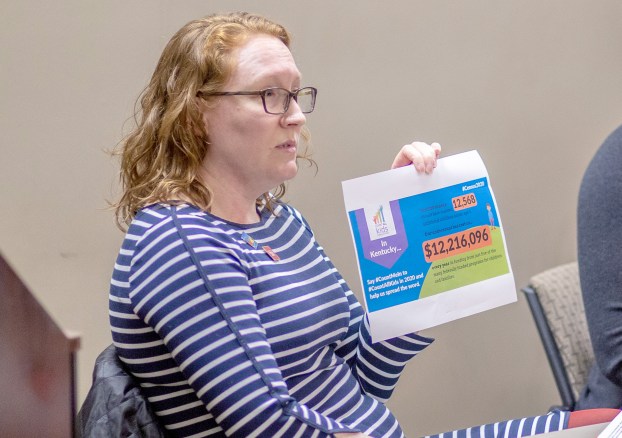 Amy Swann, a research director with Kentucky Youth Advocates, holds up a graphic showing the estimated amount of annual funding Kentucky may have lost out on due to an undercount of children under 5 on the 2010 Census. (Photo by Ben Kleppinger)

The 2020 Census will soon be contacting every family in the nation in order to complete the decennial count of everyone living in the U.S.

But every time the Census rolls around, there are particular groups of people who prove “hard to count.” These groups are more likely to be under-represented in the final Census count, which ultimately means resources to support those groups might not be available, according to Dani Rogers, a Census partnership specialist who works specifically with marginalized communities.

One of the hard-to-count populations that might surprise some people is children under 5, said Amy Swann, a research director with Kentucky Youth Advocates.

Rogers and Swann recently visited Danville to share information and answer questions about the Census at a public meeting organized by the Women’s Network of Boyle County.

The 2010 Census probably undercounted kids under 5 by around 1 million nationwide, Swann said. In Kentucky, an estimated 12,500 children were not counted.

The numbers may be surprising, but even more shocking can be the federal funding the Bluegrass State may have lost out on over the past 10 years if that undercounted stat is accurate: Kentucky lost out on $12.2 million for kids every year from five specific programs, Swann said.

“It really is true that when we undercount our kids, we end up with under-resourced and overcrowded schools,” she said.

The five programs for which that $12.2 million annual loss can be accurately tallied are Medicaid, Kentucky Children’s Health Insurance Program (CHIP), foster care funding, adoption assistance and a portion of the federal Child Care Block Grant, according to Kentucky Youth Advocates.

“In addition to determining funding allocations, there are many other ways decennial census data are used,” according to KYA’s essay on the impact of the Census on children in Kentucky. “Communities use the data to plan for the future needs of its residents. School buildings are an excellent example of this. When young children are missed in the census, school districts underestimate whether their current school buildings will have the capacity to house those missed children. This lack of information can result in overcrowded schools.”

Swann said there are a wide variety of reasons that kids under 5 might not be counted. One problem is a number of people think that if a child isn’t in the public school system yet, “then why does the government need to know about them?” she said.

But all of those children who are under 5 now will be school-aged children during the 10-year period before the next decennial census in 2030, she pointed out, meaning they need to be counted in order for their educational funding to be properly allocated.

Kentucky also has the highest rate in the nation of kinship care, meaning kids who have been removed from their parents and are being cared for by grandparents or other relatives. In those situations, the family member caring for the child may not be sure whether to count the child or not. Some grandparents who are caring for children in senior living communities where children aren’t technically supposed to be living might even be afraid that counting a child on the census would get them in trouble.

Swann said no one should be afraid to count a child because census answers are 100% confidential and legally cannot be shared with any law enforcement agency or landlord.

Rogers said when it comes to who should count a child, most people can ask themselves a straightforward question: Is that child living under your roof on April 1, 2020? If the answer is, “yes,” then count the child on your census form. If anyone has questions about who to count, they can also get more information or even take a quiz on who to count at 2020census.gov/who-to-count.

Swann said another problem that may contribute to the undercounting of kids in Kentucky is a high rate of youth homelessness — children who are “couch surfing” with different people and have no permanent home. The answer to how those homeless kids should be counted is the same: “Even if there’s a temporary solution” and the child is only staying with you for a limited amount of time, if the child is staying “under your roof” on April 1, count them, she explained.

While the 2010 Census failed to count a lot of kids, Swann said the government has listened to children’s advocacy groups like KYA and has made changes that will hopefully improve the count this time.

One of the most important steps to ensuring a complete count is raising public awareness about the census in advance, she said. The more people learn about the census now, the more comfortable they will be responding to it when mailers start to arrive in mid-March, she explained.

“It really does take the entire community to achieve a complete and accurate count in the census,” Swann said. “… We need to blanket our entire communities in census awareness. … They say people have to be told something about seven times for it to stick.”

Bald eagles named in honor of Battle of Perryville commanders

A pair of bald eagles that appear to be staking out Perryville Battlefield State Park for their nesting site have... read more