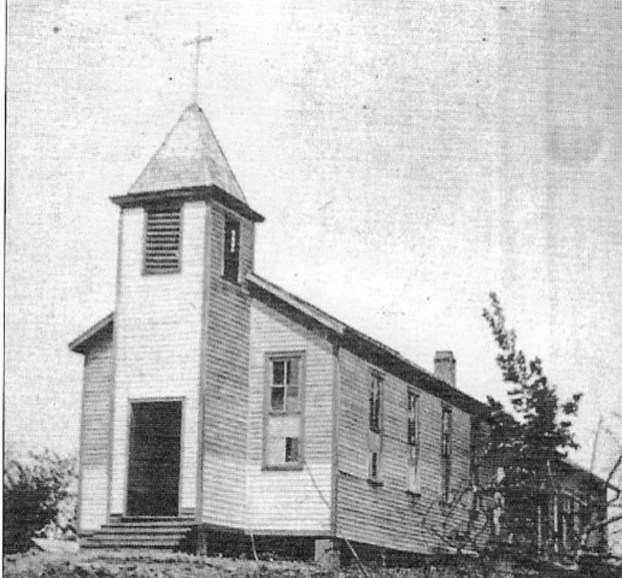 St. Francis of Assisi Catholic Church as it looked in the early 1900s. The church building is no longer standing. A graveyard near where the church stood is where many of the early settlers are buried.

(Editor’s note: Information about the New Austria settlement in southwestern Boyle County in the late 1800s was in the “Penciler” column in the Kentucky Advocate archives. It was called a German colony in the column but the people were from Austria who came to Boyle County in 1883. They spoke the Low Dutch language until they attended school and learned English.)

There are people in Boyle County who have been living in it for years, and who cannot speak a word of English.

They are out in the little Dutch colony, some 10 to 12 miles southwest of Danville, and some 25 or 30 miles in the winter.

Of all the soul-trying, spring-testing, wheel-twisting roads in the world, the one leading through the knobs to the settlement is the most sinful.

In the winter it contains mud holes which are regular sloughs of despond, and don’t you forget it, and along its edges here and there are galleys from 6 to 24 inches deep.

At one point, some 10 miles from Danville, the road climbs a hill several hundred feet high, and on the western slope it is so steep that a horse going down hill virtually carries the wagon on the tip of its backbone.

Going down this hill there is not a single place in the half or three quarters of a miles where two vehicles can pass, and there is nothing to prevent two meeting there sometime, it would be interesting to know just how they would get around the difficulty.

In the summer, during a drought like the present one, the traveler along the road is apt to get buried in yellow dust which fills his eyes, ears and mouth and makes him a sign for the wine cellars at the end of his destination.

Near the top of this hill is a little frame Catholic Church (St. Patrick’s) built by the inhabitants of the settlement, and three times daily its bell rings out and echoes over the hills and through the valleys with weird lonesome sound.

The settlement has about 40 families, averaging fully up to the usual allotment of five to the family. If there is any deviation from the rule, the cause of humanity will not suffer thereby, for the climate and other conditions thereabouts appear to be very favorable to a steady increase of population.

The colony dates back some 13 to 15 years, when the original families came over to this country and bought small knob farms in the vicinity.

Their houses dot the hillsides along this road for eight or 10 miles. Some of them show evidence of thrift and some of them do not. Now and then one sees a well-kept, neatly painted and comfortable looking cottage, which brings to mind pictures of Swiss mountain life.

There the hillsides will be clear off brush and briar, loose stones will be gathered in piles or utilized in some useful manner, and fowls and domestic animals of all kinds will be very much in evidence.

There also will be seen the old wooden clogs worn instead of shoes, together with many other reminders of the Fatherland.

The families are very economical and very industrious, most of them, and make their hill farms yield bountifully of corn, garden truck and grapes.

Many of them keep bees which bring them hundreds of pounds of honey.

Some of them make wine, which they sell very cheaply at wholesale and within the law. White and red wine as pure as it can be made, can be purchased there at 80 cents and a dollar a gallon.

Very few of the older members of the families can speak English, even to the point of making their simpler wants understood, but the younger generation, by going to the little country schools and associating with other children, speak both languages very well.

While the colony, as a rule, has by the hardest work and plainest modes of living, managed to exist and a few of its members to prosper, some have met hardships and difficulties which they were scarcely able to overcome. Some of the inhabitants have been swindled and some mistreated by the bad characters living along the Boyle and Casey line.

Information in the column stated “two older Germans, weak  and infirm were beaten almost to insensibility by two ruffians who wanted to rob them of their hard-earned means.

“A number of girls from the colony have found good homes in Danville and surrounding towns as cooks, and house girls. Some of the young girls, too, have met with misfortune in leaving their homes.”