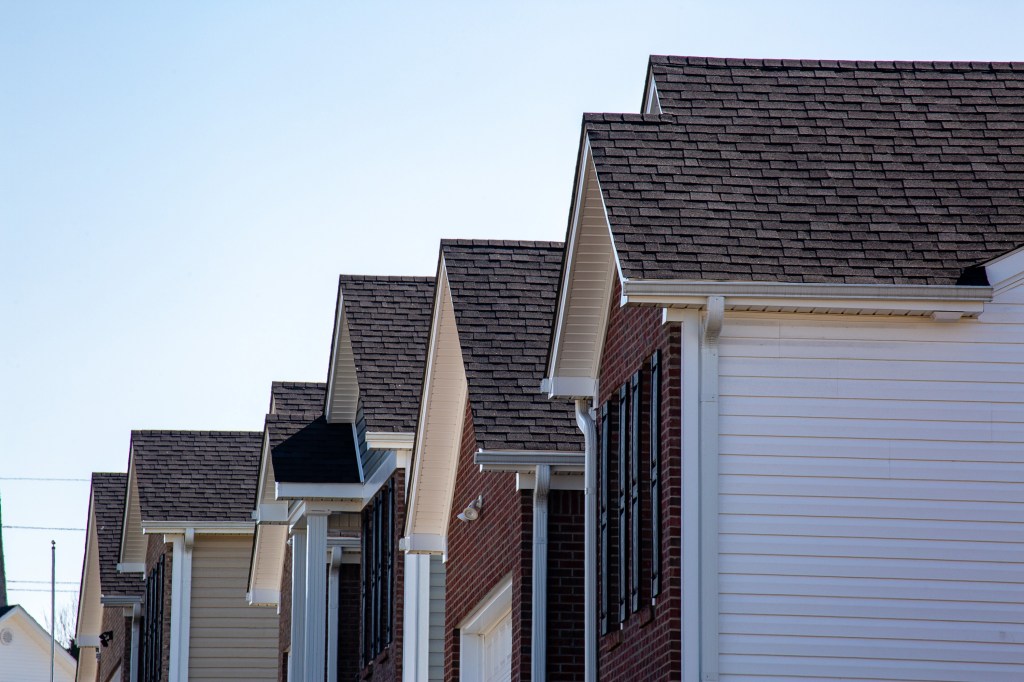 Rooftops are seen down the side of Hunt Farm Road in the Hunt Farm subdivision north of Danville off of Ky. 33. Economic development leaders say they want to help with a housing shortage in Boyle County, but it’s a complex issue and no one is exactly sure where to start. (Photo by Ben Kleppinger)

Economic development leaders in Boyle County are hoping to build off of a “smart growth” conference held here in November in order to tackle problems with the local housing market.

Out of all the smart growth principles addressed at the conference, “the housing one comes out over and over and over again” as substantial issue in Boyle County, said Brian Hutzley, one of two Economic Development Partnership board members who received permission in January to assess what came out of the smart growth conference and determine what some good next steps might be.

Hutzley’s investigative partner, tourism director Jennifer Kirchner, presented what they came up with on 10 different smart growth principles to the EDP board Wednesday. 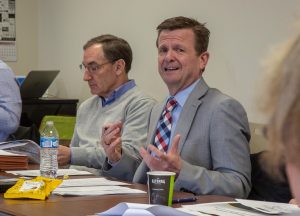 “Building quality housing for families of all life stages and income levels is an integral part of a smart growth approach,” reads the assessment from Kirchner and Hutzley. “Housing constitutes a significant share of new construction and development in any city, but its economic importance is sometimes overlooked. Adding housing in commercial districts can breathe new life into these neighborhoods in evenings and on weekends.

“And more importantly, the housing options available in a community will influence families’ economic opportunities, costs of living and how much time they spend commuting each day. Diversifying housing options within existing neighborhoods can give everyone more choices about where to live.”

Hutzley and Kirchner said they were looking for ways in which the EDP could help move smart growth principles forward — or identify the need for other groups to do so in ways the EDP can’t.

Planning and Zoning Director Steve Hunter said all of the principles listed are already “interwoven into” the county’s comprehensive plan, a document maintained by the P&Z Commission.

“I think (these principles) are happening in our community. They may not be happening by the direction of this board or taking action to kind of force some of these, but they are happening weekly, daily, through the planning commission, through cases coming in. We’re always trying to make sure we’re pushing the envelope.”

Kirchner said she thinks there are still “points of conversation” where smart growth principles could be applied better — such as a common practice of parceling off lots as small as 1 acre for homes in agricultural zones.

Ag homes out in the county are often not hooked up to sanitary sewer and septic systems; smart growth principles call for focused development in areas where infrastructure such as sewer already exists, and protection of existing agricultural land.

“The problem is that is our affordable housing in Boyle County,” Hunter said. “A lady just put a double-wide out on the fork on 1.1 acres. That’s affordable housing, unfortunately. So to get rid of the 1-acres in the county from a philosophical standpoint because we don’t think we should be developing 1-acres on septic really would take away what affordable housing opportunities there are for lower-income folks that have to live out in the county.”

“I don’t think that’s all that’s happening, though,” Kirchner said.

Hunter said P&Z is also starting to work on updating its future land-use map for Danville, as it already has for Junction City and Perryville.

That process is likely going to get contentious when the topic of Ky. 2168 comes up, he said. The relatively new connector road runs east-to-west on the north side of Danville and has zero development along it currently. Community members already fought over the future of the land along that road once, which resulted in the current setup, with agricultural zoning and no development.

The local group Smart Growth Boyle opposed development along Ky. 2168 and continues to monitor P&Z activity around the county now.

But Hunter said leaving the land along Ky. 2168 as a “no-build space” doesn’t make sense when the area has a highway and access to utilities — attributes that should make it a preferred location for development under smart growth principles.

“If we get to that point of looking at land use on the north side and you all think that makes sense, it’s going to need some support,” he said. “Because right now, most of the community I think is locked in — no growth on the north side of the county, even though we have sewer, water, roads and all the infrastructure in place.”

Danville City Manager David Milliron said he thinks the superintendents of local school districts need to be a part of the conversation on housing because school budgets are so dependent on property values.

“Economic development, workforce development, starts with them,” Milliron said of the school districts. “… getting manufactured homes or double-wides, things like that, does not bring in the base revenue, does not support long-term what it costs to educate a child in this county.”

Milliron said the county needs “planned, deliberate growth” and P&Z has to stick to its rules and regulations to ensure plans have the desired effects.

“You have to look long-term. Those plans are there for a reason,” he said. “Its incumbent upon elected officials to sit on their hands sometimes and say, ‘No, that plan is there. We’re going to follow the plan.'”

Milliron said one housing problem in Danville is the number of lots where the city has razed a condemned house and placed a lien on the property for the cost of demolition.

“What happens is the liens on those properties are greater than what the land will ever sell for. It doesn’t behoove us to sit on that land,” he said. “We have to turn it into revenue coming in.”

Milliron said the city is working to get those properties sold for “whatever we can get” in order to “get those liens off the books so developers can come in and build houses on them. Because those vacant lots do nothing for us. They bring in no tax revenue because they’re not valued enough to do so and at the end of the day, we have a workforce development shortage and we have a housing shortage.”

Danville City Commissioner Denise Terry said she has advocated for not tearing down so many houses and trying to get them fixed up instead, because they can potentially serve as good single-parent homes or senior housing, for example.

Figuring it all out

EDP Chair Marty Gibson, who is president of Farmers National Bank, said his company tracks a lot of data about housing in Boyle County and what he has gleaned from all of it is that it’s incredibly difficult to nail down which part of the housing market has the most demand.

Gibson said he hears about shortages in the housing market at every level, not just in affordable housing.

“I think we have to understand where (the problem) is and until we do that, we’ll just keep having this conversation,” he said. “… I just think it’s very challenging to talk about housing and not narrow it down into what segment you’re talking about.”

Hunter said in the three years he’s been working in the Danville community, he’s seen limited development of new housing and almost no growth in multi-family, lower-income housing options.

Less pricey new homes being built in the Shelby Green and Hunt Farms subdivisions are still in the $200,000 range, he said.

The cost to develop a neighborhood and build a new home in Boyle County makes it difficult for developers to turn an acceptable profit on lower-priced houses, Hunter said. He offered an example of a new road added to the Hunt Farms subdivision recently, which was around 700 feet long and cost around “a quarter of a million dollars” to build. Combined with Boyle County’s relatively high cost per acre for vacant land, it makes affordable housing difficult to build, he said.

Terry echoed those thoughts later in the meeting. Developers “have to have the incentive and they have to have the profit margin and the lower risk in order to invest their money,” she said. “And I don’t blame them.”

The EDP ended the conversation by agreeing that Kirchner and Hutzley would coordinate more conversations in EDP committees about housing, perhaps by bringing in real estate agents and other experts to provide insights.

That growth ranks Danville eighth in Kentucky and among the top third of metropolitan and micropolitan areas in the nation for home-value growth, according to the rankings.

“Home values are a great economic indicator as they tend to rise and fall based on where high-paying jobs and industries are gravitating towards,” according to LendEDU. “Tracking home values over nearly a full decade can help us predict what cities and states are best positioned for ongoing economic success as we head into the next decade.”

The Danville-Boyle County Planning and Zoning Commission has been dealing with some new home-development activity recently.

Development in the Hunt Farm subdivision north of Danville off of Ky. 33 (Shakertown Road) stagnated for years after the Great Recession of 2008, but activity has resumed in recent years, and the developer, Joedy Sharpe, recently gained approval for a new phase of the subdivision that could have as many as 15 houses built in it.

The P&Z Commission has approved a future land-use map amendment in January for a potential housing development in south Danville, near Hogsett Primary School. That condominium development could have as many as 35 units, each of which would have at least 1,000 square feet and be priced at less than $150,000, according to the developer, Wesley Carter. The condo project is coming before the P&Z Commission again on Wednesday, requesting a zone change to allow for a higher residential density.