Boyle library presents a murder mystery: ‘The Skeleton in the Closet’ 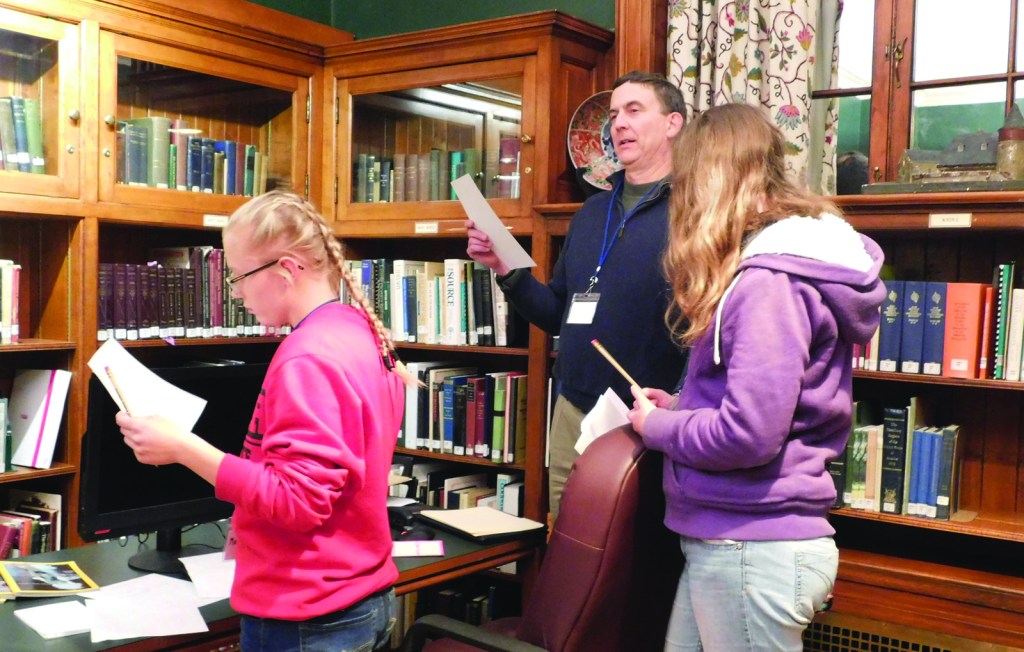 Kevin Faulkner sorts through the evidence with some of the other "detectives" at the 2018 murder mystery, "Mummified Murder." (Photos submitted)

Trying to solve a murder mystery is an off-beat, entertaining way to spend an evening. The Boyle County Public Library has hosted a number of murder mysteries over the past few years. On Tuesday, Feb.25 at 6:30 p.m., the library will host “The Skeleton in the Closet.” This after-hours event is co-sponsored with West T. Hill Community Theatre and will feature interactive performances by local actors.

Adults and teens are invited to play the role of detective in this mystery. Once the scene is set, participants will sort through evidence, explore the crime scene and conduct interviews with the suspects as they try to solve the murder in a collaborative group effort.

The mystery takes place in a fictitious rural community. When building inspectors find a skeleton and a suitcase in a concealed closet of an abandoned home, a cold case becomes hot. The body is that of presumed runaway, Valorie Knight, who has been classified as “missing” for over a decade. Now, old suspects are rounded up, and a special task force is brought in to determine who among them has been hiding a dark secret.

“The Skeleton in the Closet” is written and directed by Lyndsi Hersch. This is the third murder mystery held at the library written by Hersch, who is an avid mystery reader and whose favorite author is Agatha Christie. (The library has also hosted “Murder by the Books” and “Mummified Murder,” both written by Hersch.)

“Cold cases have unique dynamics,” says Hersch. “People, memories, clues and crime scenes have all aged, and you have to work around that. I wanted to challenge the audience to hunt for clues that may no longer be obvious, and to piece together a story conflated by time and rumor.”

People who enjoy reading mysteries or listening to true crime podcasts will likely enjoy trying to solve this cold case. Participating in a murder mystery event is a great way to test one’s sleuthing skills.

Library staff truly enjoy hosting events where a wide range of ages can work together.

“Murder Mysteries are beloved by us because they’re beloved by the community,” says Programming Assistant Chuck Geither. “They offer a night of excitement and drama and puzzle-solving that most people don’t get anywhere. They’re tons of fun for the participants and for the actors.”

Geither also gives Hersch rave reviews. “Lyndsi is awesome because she does this for us purely out of a love for classic mystery and theater. It’s not work for her, it’s a passion project,” says Geither.

This is the first murder mystery event where the library has partnered with a local theater.

“Several of the goals relating to our programming involve reflecting what our community does well and highlighting the expertise that already exists,” says Public Services Librarian Caleb Conover. “We have corresponded with West T. Hill in the past about partnering in a variety of ways, and the murder mystery seemed like a great opportunity. It’s both scripted and improvised, relying on the talent of the actor to contribute to the experience of the participants.”

West T. Hill Community Theatre worked with the library to connect them with actors to fill out the cast for this program and hopefully for future events.

Anyone interested in participating in the “The Skeleton in the Closet” should arrive at the library by 6:30 p.m. and plan on staying until 8 p.m. Registration is not required to attend this event. The murder mystery is for ages 13 and up. Refreshments will be provided.

More information about this and other upcoming events can be found at www.BoylePubLib.org or by calling the library at (859) 238-7323.