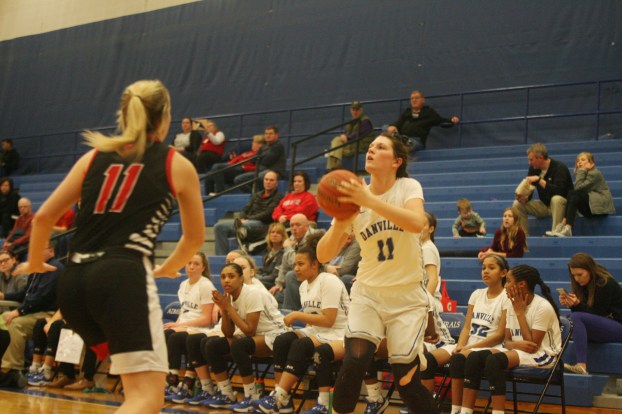 Admirals get big win to close out year, prepare for district

Danville girls basketball coach Judie Mason didn’t stick around long to celebrate her team’s 69-34 win over Taylor County to close out the regular season. She was already on her way to Boyle County to scout for a possible meeting on Wednesday in the district tournament.

That’s what the focus is now for the Admirals, but Mason felt it might have been the focus in the first quarter of Friday night’s game.

Junior Lara Akers came down and hit a three to start the game and hit another one on the next possession to put Danville ahead 6-3 right out of the gate. But for the rest of the first quarter, Mason feels her team wasn’t as crisp as they could’ve been.

“I knew we’d come out a little sluggish. That’s my fault because I don’t think I prepared them well enough coming into this one,” she said. “We’d played them earlier in the year and beat them by 20 so that’s my fault. I’ve been preparing them for the district tournament.”

In the second quarter, the Admirals changed from a zone press to a full court man-to-man press and the game was blown open from there.

“Our man-to-man press worked really well there at the end,” Akers said. “It gave us the opportunity to push the ball forward and get some easy layups.”

“I told them in the second quarter ‘Let’s just go straight man-to-man and just play one-on-one and go hard.’ That was the difference in the game,” Mason added.

While junior Cam Preston led the way with 18 points, it was Akers initial burst of scoring — she had eight in the first quarter and finished with 13 — that opened the court up for Preston to take control of the game.

“Lara’s our scorer and when she starts scoring, it opens it up for the players around her,” Mason said. “Tonight, it opened things up for Cam. We finally convinced her that when Lara’s hitting those kinds of shots, she’s going to be open. Cam’s just now figuring out what I want out of her.”

The win gives the Admirals a good burst of momentum as they prepare for the district tournament. On Tuesday, Danville was the Senior Night opponent of the region’s top team, Casey County and took a hard loss to the Rebels. Mason was proud of the way her team responded to that loss on Friday.

“I thought this could be a trap game and I think we played hard and that’s all I was looking for,” she said. “We had a physical game Tuesday against Casey County so I was glad we came out as hard as we did tonight.”

In the second half of Friday’s game, Mason was happy with what she saw in the half court as the Admirals slowed the tempo down a little bit with the big lead.

“I’ll be honest, in the second half I think we ran our half court offense better than we have all year,” she said. “I know the competition wasn’t as good, but I’ve been looking for that inside-outside game and I thought we did that tonight. We reversed the ball good and went inside. We had a really good second half halfcourt offense.”

Danville closes the season out 20-8 but if Mason’s quick exit to scout Boyle County is indication, they’re not looking back, only forward.

“That game is the hardest game to win — the first game in the district tournament,” Mason said. “Boyle and DCA play Monday night and we’ve got to be ready to play on Wednesday. And everything we’re going to do from now until Wednesday is to prepare for that.”