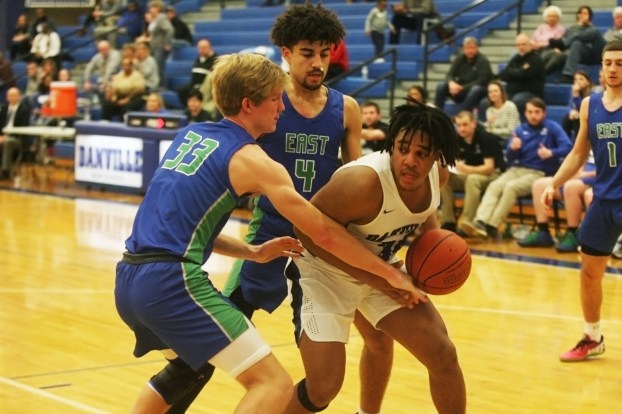 Ads send off seniors with a win

Danville’s Friday night’s 56-49 win over East Jessamine could be summed up in two words by coach Ed McKinney.

After the first quarter of play, the score was the Jaguars 9, Admirals 3.

“We couldn’t do anything right offensively in the first quarter,” McKinney said. “Our ball movement was bad. After that, we did a little better. At halftime, we talked about moving the ball better and we did — it didn’t stick in our hands and we had a lot of multi-chance possessions.

“I didn’t think we played very well and I thought we could do better,” he added. “You can’t just forget about it because you’re doing stuff that we can’t have offensively. You’ve got to learn from it. I was kind of aggravated to be honest with you.”

After what was likely the worst quarter of basketball the Admirals have played all season long, they slowly got better as the game progressed — scoring 13 in the second quarter, 16 in the third and closing out with 24 points in the final quarter to secure the win.

But the game was ugly from start to finish.

“Nick (Barton, East’s coach) and I both agreed after the game,” McKinney said about the ugliness of the game. “It seemed extremely physical in there too. It was just hard for either team to get into a rhythm. That wasn’t their best game either. It’s a shame that neither team was at the top of their game.

“But we talk about needing to win those kinds of games,” he added. “You’re going to have to win them in the postseason. You need to grind some out and that one was definitely a grinder. Plus, it’s good to win on Senior Night. That’s always fun.”

McKinney admitted that he never really knows what to expect going into a Senior Night.

“Starting the seniors makes it different. It gives you a different vibe,” McKinney said. “You never know what Senior Night’s going to be like.”

And it was a pair of Danville seniors who led the way Friday night. Trey Dawson was second on the team with 15 points and made some big defensive plays. But, as has been the case so often this year, Darrian Bell controlled the game. He led all scorers with 20 points, but it’s the gritty stuff where Bell really makes his mark.

He came up with key rebounds late in the game and drew several charges to get the ball back for Danville.

“We’re not going to know how bad we’ll miss him until next year,” McKinney said. “He just saves so many possessions, whether he picks it up as a loose ball or gets the rebound. You won’t know what’s happening and then all of a sudden, there’s Darrian with it. He just erases — and tonight there was some bad basketball and he erased it. He just mops up so many bad plays and we had a lot of bad ones to mop up.”

But regardless of how the game was played, it was about honoring the Danville basketball class of 2020.

“If you go back, I don’t know when the last time we’ve won 20 back to back and we’ve got a chance to win 20 back to back this year,” McKinney said. “That’s two good seasons. We’re a small school sandwiched around a lot of good programs. To have a competitive basketball program is a testament to what those five have put into it.”

McKinney said that this year’s 20 win season — they’re one win away from it — is extra special because of the level of competition they’ve played this year. Lexington Catholic, Lincoln County, Oldham County, Pulaski County and Somerset have combined for a 114-18 record this year.

“Sharing athletes is a must at a small school like Danville and it presents challenges at the same time. Our seniors have done a great job of keeping our program competitive and relevant with teams inside and out of the region and many of them are multi-sport athletes.”

McKinney also praised each of the seniors — Nick Price-Hancock, Damion Givens-Ford, Corey Zeznanski, as well as Bell and Dawson — individually.

“Nick — it’s hard to find minutes but he’s maybe the most athletic guy we’ve got on the team. He’s big, strong and has a great attitude,” he said. “He wants to play but he’s done a great job of handling that really well. You see flashes of it. He hit that three tonight, drove it and laid it in. He does some good things. He’s got a lot of basketball ability.

“Damion was good tonight and he’s another kid who’s handled his role well. He got some big rebounds tonight and is going to keep giving us good minutes.

“We’ve talked about Corey before. You know how I feel about him. He’s just so mature. He understands the bigger picture and playing for something bigger than himself. You see the reaction, everybody loves him because he does things the way you want any player to do them. “Trey’s had a really good career here. He could play in college, but he’s got such a good offer from Louisville that it’s hard to pass up. He’s a great kid, a great student. He’s just so great to be around.

“What else can you say about Darrian? I put a plug in for him as 12th Region Player of the Year. He just does it all. And he’s a class kid. He doesn’t even need athletics. He’d make it without sports. He’s everything you want a student-athlete to be.”

This year’s senior class for Danville is certainly a special one.

“We have some really good kids. I have so few problems — I’m so lucky with that. There’s no issues at all and that’s because of those seniors,” McKinney said.

And they got to close out their regular season with a win — an ugly win, but a win nonetheless.