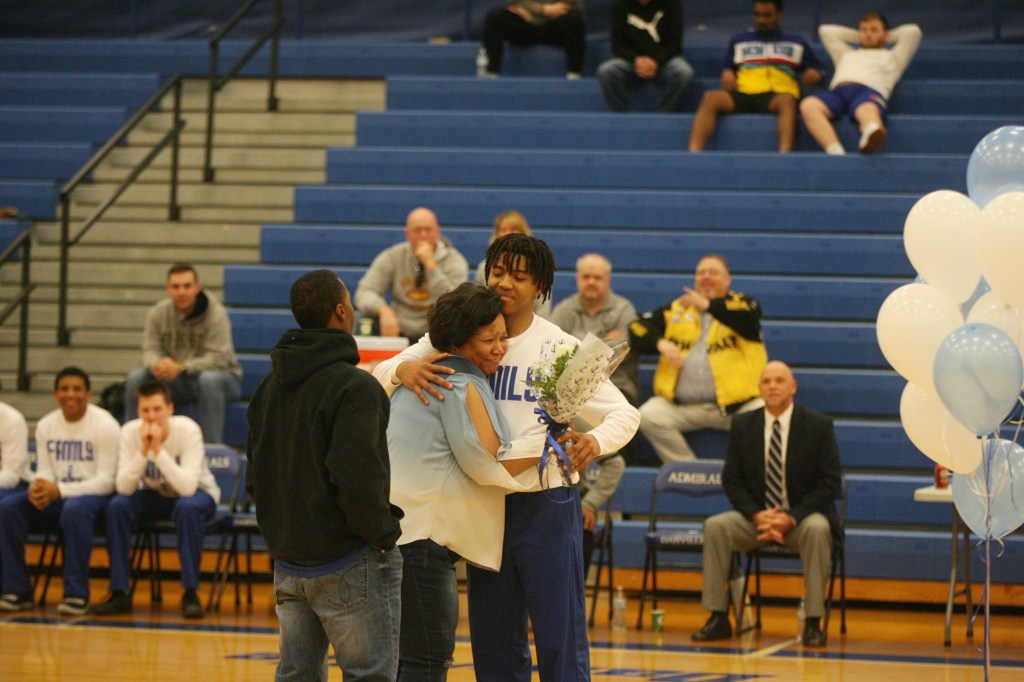 As the senior class of Danville’s boys basketball team played their final home game Friday night against East Jessamine, it was one time Damion Givens-Ford knew he was going to get the start.

That’s not always the case for the Admirals’ stretch four. Depending on the matchup, that fifth starter role has shifted between him and fellow three-named senior Nick Price-Hancock. But that’s never bothered Givens-Ford.

“It’s just about trusting your teammates and trusting your coaches who do that scouting and all things pregame,” he said. “You want to start the game off right. There’s times where Nick will come in and just play better than me, straight up. And there are games where I do better than him. It just depends on who’s playing better and what’s going to affect us positively.”

He understands that he and Price-Hancock bring different things to the table. Price is the bigger of the two — he played defensive end on the football field — while Givens-Ford brings a guard skill set to a low post body.

“I feel like I have a little bit of game in all areas. That’s why I can play the five, four and the wings,” he said. “I played point in JV, but then I just grew. I’m a pretty good shooter and I can pass the ball pretty well. It’s just that most people can’t tell, because I’m the five. I feel like I have guard skills and I show that in games because that’s how I score.

“I’m usually a lot quicker than a normal center will be,” he added. “Offensively, if I beat my man and get a lay up, it’s that guard background that helped me. A normal big man — like Darrian (Bell) has always been a five. Even if he’s undersized, he’s always been big and has always had that ‘I need to go out and rebound’ mentality.”

Off the court, Givens-Ford is just like any other high school kid. He just loves being around his friends and his family. His favorite class is speech because of Mrs. Branson, the teacher.

After school on game day, he says that he usually heads home first, if it’s a home game, to “get his mind right.”

“I’m usually pretty tired after school so I just want to relax a little bit and get some food in me,” he said. “I might go eat with my teammates at Giovanni’s or I might just get a meal with my family. It’s usually something healthy. Then I come here, get my AirPods in and just listen to music and get ready to go.”

In those AirPods, he’s usually listening to NBA YoungBoy.

Givens-Ford is one of several key pieces to Danville’s team this year that, while they might not get the flashy scoring totals or make the highlight plays, do the dirty work that is necessary to win basketball games and for that he has the respect of his coach, Ed McKinney.

That mentality is something he says he wished he’d have known when he was a freshman coming in, and that he wants to pass down to the new group of freshmen.

“Just come in ready to work. Realize you’re a freshman and have time to grow, but it’s not going to be forever before you’re a senior and you’re about to graduate,” he said. “I didn’t realize that coming in and I didn’t realize how hard you have to work just to be a decent player at the varsity level. For juniors about to be seniors, if you’re always getting that shine, keep working hard and getting better. If you’re under the radar a little bit, let your senior year be the year you shine. I transferred from Lincoln County and I didn’t get a lot of playing time there. I wasn’t the one getting interviewed or even really in the game. I understand where people are coming from there.”