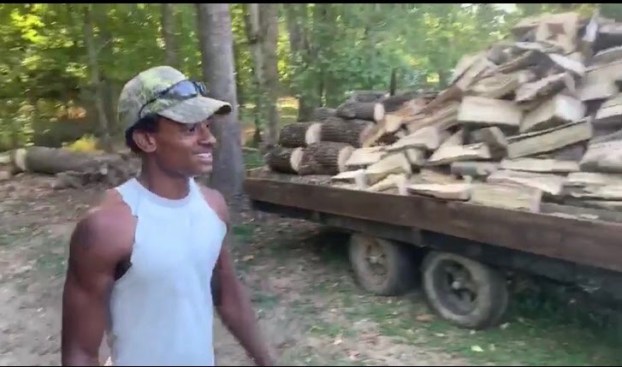 Darian Logan working hard at his job by cutting down trees.

Danville High School has students that work different jobs after school. Darian Logan, a senior, is one of those students. Logan currently “works on a farm every day” after school and wants to start his own farm in the future.

“I am a senior at Danville High School that works on a farm every day after school. I played football for three years at DHS before I decided to get a job,” Logan said. “I like to hunt, fish, and work on the farm. Farm life is pretty hard because some days, it’s easy but other days, it’s really hard. But I enjoy working there.

“My plan after I graduate Danville High School is to live life to the fullest and buy land for my farm. One of my favorite things to do on the farm is making hay for the animals. I also do some tree work. I upload some of my work on my YouTube channel. For more information, go subscribe to my YouTube channel, ‘Darian Logan.’

“I always find something to do on the farm because when you’re on the farm you’re supposed to work and I work a lot. Sometimes I am doing physical work and the other times I am operating machines such as tractors.”

Abbie Chandler, a Danville High School math teacher, said she thinks Logan “is one of the hardest working students that we have at DHS.”

“Darian has faced more adversity than some students will in their entire lives, and somehow always manages to have a smile on his face,” Chandler said. “He has continued to work hard and make good decisions for his future. I’m a huge fan of Darian´s work, especially since he cuts my grass in the summers. He has his own business, plus works at multiple jobs, all to provide for his family. Darian has such a wonderful future ahead of him.”

Jennifer Shearer, the staff coordinator of GSA at Danville High School, said that ”GSA used to stand for the “Gay-Straight Alliance,” but it has come to be known in recent years as “Gender-Sexuality Alliance” to be more inclusive. 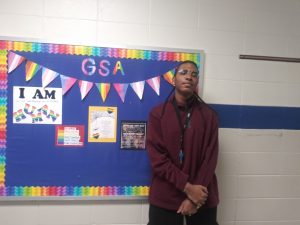 Shearer said GSA typically meets on Tuesdays after school, in room 129 (Ms. Shearer’s room). Shearer also stated that the way GSA got started was “Last year, a student, Natalie Grubbs, worked with the administration to start the club.”

Shearer said that “GSA is important because it gives its members a sense of community and belonging.” She said that “I’ve only experienced positive reactions. People felt DHS was way overdue in having a club like this.”

Shearer said that GSA is trying to accomplish teaching the value of friendship and kindness to all students.

“I am so proud that our students wanted to establish this group and asked me to be the sponsor,” she said. “I hope to grow the club and services in the future.”

“The one thing I want people to know is that an ally is a friend; everyone needs to know they have one,” Shearer said. “This club provides this to students in our school who may feel as though they do not have the support or friendship of their peers. They have one here. It’s a safe place where all are welcome.”

On Thursday, Feb. 13, Jarett Krosoczka had a Skype call with students from Danville High School. This year’s school-wide read book is “Hey, Kiddo,” a story about a boy who found a way to deal with his mom’s addiction from a small age.

Eason, who was in charge of getting in contact with Krosoczka, stated that the reason she picked the book was because “it was eye-opening and Mr. Krosoczka was very lucky to get out of that situation.”  Krosoczka explained during the Skype call, “This is, ‘Hey Kiddo,’ a book about my own upbringing and from the fact that I love to draw. Also, (it is) about how I was surrounded by a good amount of chaos from the addictions of my mother and was raised by my grandparents. They were really loving people, but also had their issues, like drinking and anger.”

Krosoczka said one of his biggest challenges he had to figure out about writing over his life is “how to turn these people into characters that are in a book.”

“Hey Kiddo” was a long and emotional journey while writing it. Krosoczka began with the idea of “Hey Kiddo” in 2001, but he had also published his first book during that time. Most of Krosoczka’s work involves him writing children’s books. In fact, he wrote the “Lunch Lady” series of comic books.

Students very much enjoyed this year’s school-wide read book. Senior Mia Alonzo says, “I thought it was very relatable and interesting. It was like a comic book, but for older kids.”

Now DHS students are ready to see what books will be used in the near future.

From our schools: The Rebel Times

The man in the red cape; 42 years of heroic custodial service  By REILEY COLWICK BCHS Not all heroes wear capes,... read more