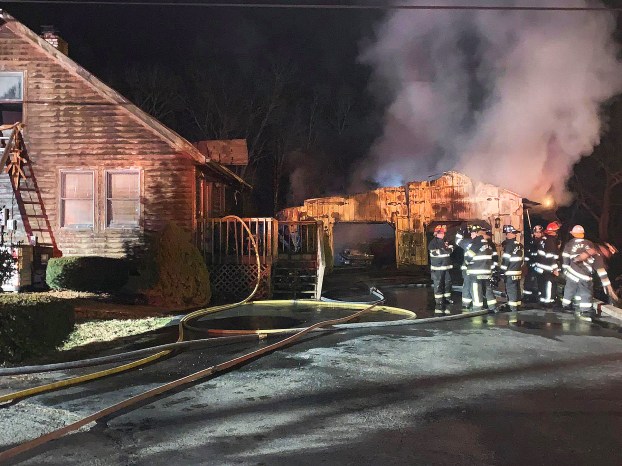 A fire at a residence at the end of Goggin Lane Saturday night completely destroyed the garage and damged the house. Boyle County firefighters were called out to the fire at 8:30 Saturday night, and stayed on scene until 1 a.m. on Sunday. (Photo by Jason Cullen_

Fire spreads from garage to home on Goggin Lane

A fire Saturday night destroyed a garage and damaged a home at the end of Goggin Lane, but no one was injured.

The fire appears to have started in the garage, and flames quickly spread to the home at 175 Goggin Lane, said Boyle County Assistant Fire Chief Tony Broyles. The residents were at home when the fire broke out, he said. Someone had called them to say their garage was on fire, and when the couple went outside to see the fire, flames were already spreading to the home, he added.

About 20 firefighters answered the call at 8:30 p.m., and stayed on scene until about 1 a.m. Sunday, Broyles said.

The garage was completely destroyed, including the two vehicles that were parked inside. The home was damaged and is currently unlivable because of holes in the roof, he said. However, the homeowners were able to get many of their belongings and clothes out of the house.

Broyles said the same location suffered a fire more than 20 years ago. He said he was at the first fire, when a small, white frame house on the property was destroyed. The property owner tore it down and rebuilt the wood-siding structure that burned Saturday. Broyles said he overheard the owner say he would not rebuild again.

DANVILLE POLICE DEPARTMENT News release Here is a glimpse of some activity on Feb. 23 from the Danville Police Department.... read more