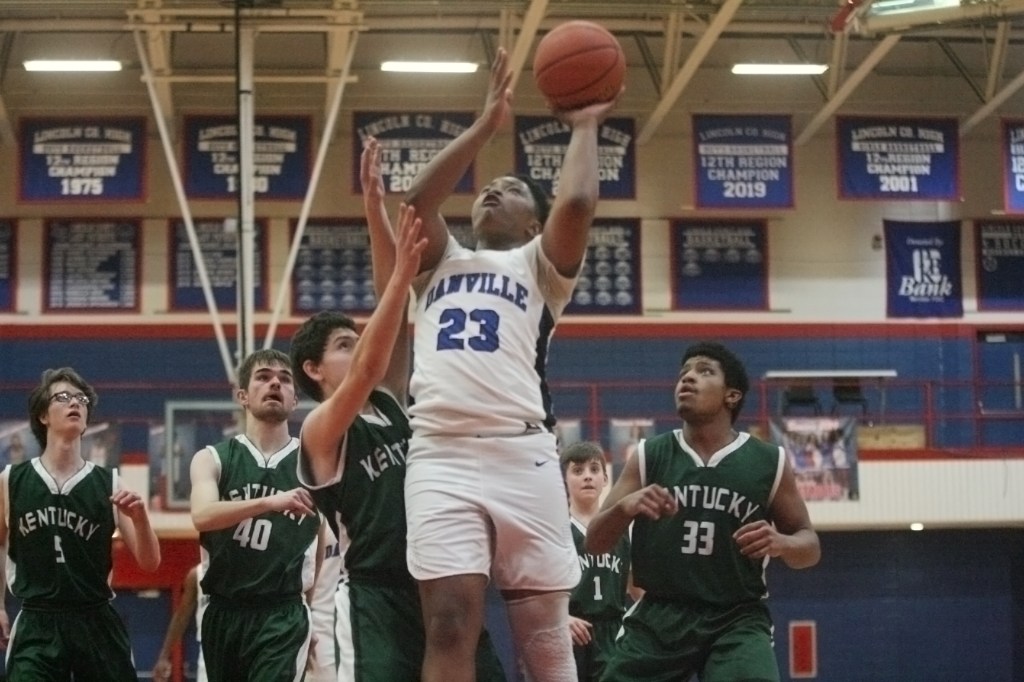 On Tuesday, Danville got over the first hurdle on its way to returning to the 12th Region tournament with an 87-34 win over the Kentucky School for the Deaf.

Danville pulled its starters out in the first quarter with a big lead and got big minutes from the bench. Coach Ed McKinney said it was “good to get our young guys out there.”

But now his focus turns to rival Boyle County. The two schools both captured home wins in the two meetings this year and Thursday night’s meeting has the added stakes of a trip to the region.

“If we’re doing a lot of motivation for this one, that’s not good. I think we’ll be fine. Both teams are going to be plenty motivated,” McKinney said. “It’s your rival for a chance to go to the regional tournament. The action should be pretty intense.”

Boyle has had an up and down season this year, but picked up two quality wins over Wayne County and Clay County to close out the regular season.

“They’ve made improvements all year,” McKinney said. They’re dangerous and it’ll take our best effort to come out and win.”

In the second meeting this year — a 64-35 win for Boyle — McKinney felt his team didn’t do a good job on the defensive glass and that will need to be cleaned up if his team hopes to compete for the district title on Friday.

“If I had to say one thing, we got to keep them off the offensive glass,” he said. “And you know, they’ve got some guys who can stick it in the basket so we’ve got to do a great job on defense. But it’s all about rebounding. We gave up way too many on the offensive glass out there. But that’s a credit to them, they went up there and got it. We’ve just got play well in all facets. If you don’t do that, you’re going to lose.”

In the Monday’s first round action, Garrard County made short work of Danville Christian Academy, winning 74-42.

Golden Lions star Brayden Sebastian continued his efforts to break the school’s career points record, recording 44 on Monday. As Garrard had the game in hand, Sebastian remained the only starter on the floor.

“I pulled him over at the end of the third quarter and asked him what he wanted to do — if he wanted to play a little more,” Garrard coach Ryan Young said about the choice. “I told him I would give him a four minute rope just to be wise. I told the guys in there, with a guy who’s poured so much into our program and done so much for it, when you’ve got a chance to capture greatness — and with the unfortunate injury costing him some games — we wanted to give him a little extra rope and give him a realistic shot at it.”

Young credits Sebastian with being an unselfish player, but also has the ability to take over a game when he feels like he needs to.

“I think he sensed early we had some guys who might’ve been off a little bit and great players this time of year have to read the temperature of the game,” Young said. “If that’s going on, we just need him to be ultra aggressive.”

“Ian Alcorn hasn’t played a ton for us this year. He’s a young kid with a bright future,” Young said. “His grandmother passed away (Sunday) afternoon and I thought he gave us some huge minutes out there. I just love that for a kid handling an emotional situation like that and I couldn’t be more proud of him.”

Young knows that it’s going to take a lot to knock off Lincoln County — the district’s top seed, the top ranked team in the region and the host.

“You got to play a full 32. I feel like our team has rounded into form since we played them,” he said. “It’ll be a great challenge, but at the same time it’s a great opportunity for our program. We’ve just got to have a great day of practice and really be in tune with what we’re trying to do with the game plan.”