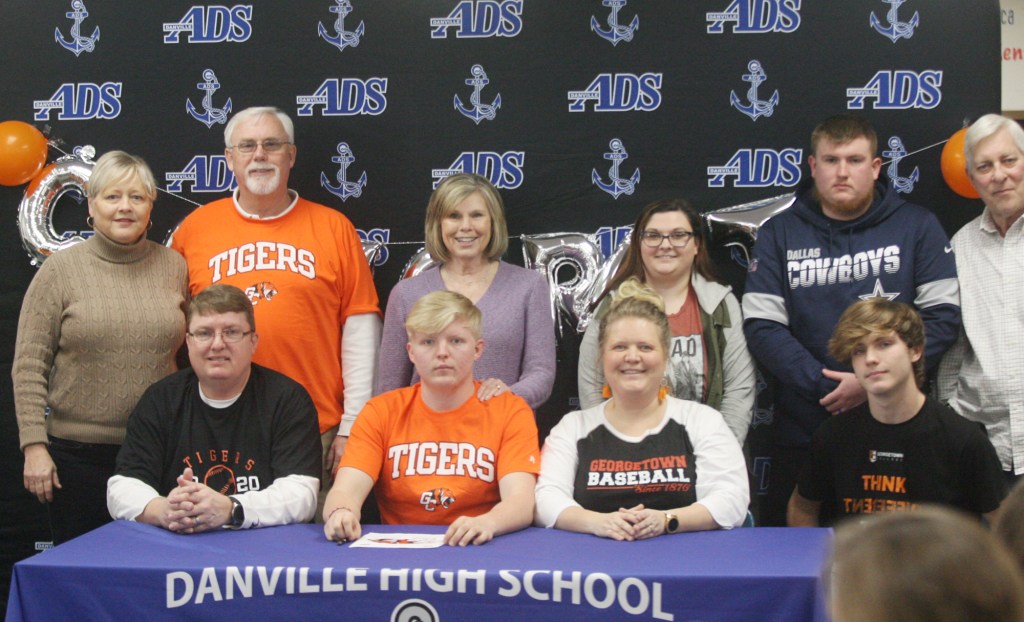 Hunter Baxter surrounded by his family after signing to go to Georgetown. (Photo Derek Brightwell)

After committing to Georgetown College in the fall, but decommitted shortly after when he wasn’t sure what his future had in store for him.

“He had some other offers and some other places. He thought about taking some time off to do some mission work,” Danville baseball coach Paul Morse said about Baxter. “Then he looked at going to school and not playing ball. That’s a difficult thing for guys to do when it’s something they’ve been doing all their lives.”

Baxter said that during that time, he didn’t feel like it was his own “heartfelt decision” to step away from baseball.

“It didn’t feel right. I was going to go on a gap-year mission trip and that fell through because it just wasn’t what I wanted,” he said. “I knew baseball was really for me and Georgetown stuck out to me as feeling like home.”

“When I decommitted I texted him and told him I was going to go on a gap-year and he was really all for it,” Baxter said. “That’s really why when I decided to come back, I stuck with Georgetown. When I decommitted, it was clear that he just wanted the best for me… Georgetown really wanted me. He texted me on my birthday. It just felt like it was meant to be.”

Now that he’s finally settled on where he’s going, Baxter says that he’s ready to turn his focus entirely on his senior season at Danville.

“I’m a lot more relaxed. This is such a weight off my shoulders. I’ve been stressed beyond measure getting college essays done, and grinding out baseball and grinding out schoolwork,” he said. “That’s just trying to find somewhere to go and now that I know where I’m going, I can start focusing on the expectations for this season which are a lot. It removes a little bit off my shoulders.”

“It just takes a lot off of him mentally like it does a lot of guys in any sport,” Morse agreed. “Just to have it done before your senior year and actual games start is always a plus.”

And that senior year will bring a new role for Baxter. He’s the team’s only senior this year and both he and Morse know that he’s got to be the team’s leader.

“We talked about it earlier in the fall — he has to be that guy,” Morse said. “He’s got to be mature, take charge of things and lead by example. He’s got to do things the right way, which shouldn’t be hard for him because that’s what he’s done. He needs to be a little more vocal this year.”

“For me, it’s more than just the general aspect of a leader,” Baxter added. “I want to be remembered as someone who left a mark on the next generation in terms of what it means to be an Admiral.”

Danville comes into this season with a lot of expectations, and Baxter will be a crucial piece of the 2020 team.

“He’s played a little bit everywhere for us,” Morse said. “He’s caught, played third, corner outfield and pitched. He’s really versatile and is just a solid ballplayer. He makes those routine plays for you and he swings the bat really well.”

But ultimately, Morse is excited for a player he’s coached long before he stepped on the high school field.

“We want all of our guys to have that opportunity if they want to — to continue playing at the next level and get their education,” he said before Baxter officially signed. “I can’t believe he’s a senior. Feels like just yesterday he was a freshman starting for us as a catcher — kind of thrown into the fire early on.”

As for Baxter, he knows that he’s going where he needs to be.

“I feel like Georgetown was the best decision I could’ve ever made.”

Ads send off seniors with a win