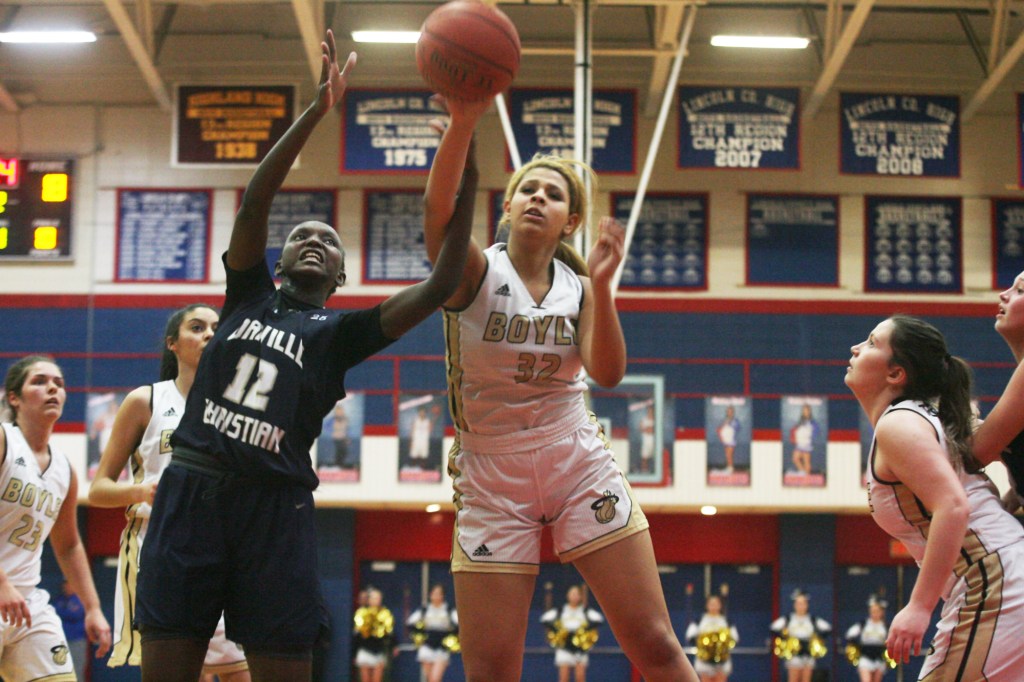 It had been a long time since Boyle County’s girls basketball team got a W. The last time it happened was a 58-45 win over Lexington Catholic in the 2A Classic on Jan. 10. Since then, Ryan Wiersma’s team had dropped its last 13 as it headed into the district tournament.

With Monday’s 50-32 win over Danville Christian, the losing streak has stopped and the Rebels have a chance to advance to the 12th Region Tournament if they can get past rival Danville on Wednesday.

“We really needed this game — just to get a win going into the Danville game,” Ryan Wiersma said after the game.

But Boyle started off slow. At the end of each of the first two quarters, the Rebels lead was seven points as the Warriors hung around.

“Obviously they were a lot better team than what our kids thought they were,” Wiersma said. “(Ruth Mbugua) is phenomenal. She’s an amazing talent. They competed their butts off.

“I think our girls thought they were going to run away with it early, and they fought and clawed to pull away at every instance they could so I’m really proud of our kids.”

Keely Bowling’s 15 led the way for the Rebels — all by way of the three ball as she continues to be a lights out shooter for Boyle County.

“For us to be successful, Keely Bowing has to make shots. Everybody knows that,” Wiersma said. But he acknowledged that Monday’s win was a “total team effort.”

“We had a lot of different people step up — from Maddie Baker’s charge to Kelsea Hinkle’s three offensive rebounds to end the second half,” he said. “Everybody was ready to play. Qualls gave us a great effort off the bench, same with Zoey. Really proud of our team tonight.”

Wiersma’s Rebels have taken two big losses to the Admirals this year, and he knows it’ll take a big effort to get past them this time.

“They’re a very physical team. We talked about this after the last Danville game,” he said. “We have to match their physicality, be a great blockout team and have a high value for the ball. That’s the key to beating Danville. They’re very good, very talented. It’s not one person who’s talented for them, it’s their whole roster. We’ve got to have a great team effort like we did tonight.”

On Tuesday, Garrard was in action against KSD and won 66-27 and will face host Lincoln County on Thursday. Earlier this month, the Lady Lions upset the No. 2 seed in the district on their home floor.

Garrard’s starters had a short game — being pulled in the first quarter — but coach Jimmie McCulley thought it important to get them back on Lincoln County’s floor.

“A game like this you can get in some bad habits. It’s a tough game to coach and a tough game to play,” he said about the starters. “I just wanted to get them back out on this court where we won last time and get them up and down the floor and get the feel back again. We’re coming back here with a purpose Thursday night and that’s to play for a district championship.”

McCulley said that Tuesday’s win was also important as it gave a chance for the younger players to get varsity experience in the district tournament. One of those players was seventh grader Reagan Powell scored her first career varsity points in the win and finished with six on the night.

“Laya (Quisenberry) looked at me in the huddle and said ‘I got you coach’ and that’s what this is all about,” McCulley said about Powell’s first points. “They’re all rooting for each other.”

But now, the focus turns to the task at hand — Lincoln County. The two teams split their matchups this year, and each won on the other’s home floor.

“It’ll be tough. It’s on their home floor, but we have confidence,” McCulley said. “We won here last time, they won on our floor. But our kids finally believe. After that game, they got the monkey off their back. They just want to come play and whatever happens, happens.”

Boyle takes on Danville on Wednesday night at 6:00 p.m. The Lions and Patriots will meet the following day at the same time. Both games are at Lincoln County.