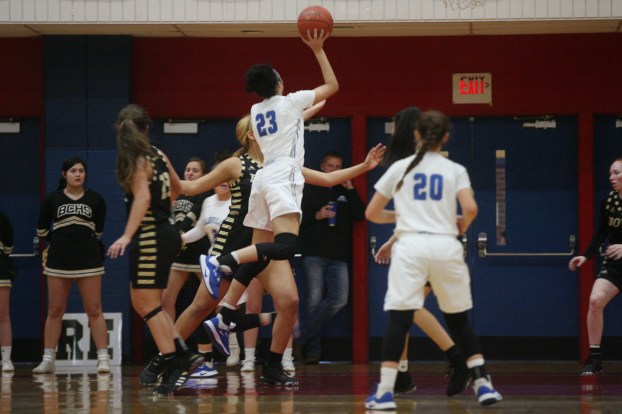 Danville head coach Judie Mason didn’t want this one to drag out. She wanted her Admirals to get out in front early and take control of the game from the tip.

And that’s exactly what they did.

“They jumped on us and we cut into it but then they just hit us in the mouth again,” Boyle County coach Ryan Wiersma said after his team’s season ended with a 68-40 loss to Danville.

“That was the first thing I said and the last thing I said to them today — we had to bury them in the first quarter and not let them think they can stick around with us,” Mason said. “It’s Boyle-Danville and anything can happen. I thought that first quarter we ran our offensive and defensive schemes as well as we have all year.”

The Rebels didn’t have a field goal all quarter — their four points came off of free throws. They did have eight turnovers, including two 10-second violations as the Admirals ramped up their press.

“That’s a very good group over there and she does a great job with them,” Wiersma said about Danville. “They’re competitive and they’re a talented group of individuals.”

Cam Preston, Madison Terrell and Des Tandy all recorded blocks in the period — Tandy getting two to close the quarter out. Five Admirals scored a combined 18 points in the game’s first eight minutes and Boyle couldn’t recover from the onslaught.

“Turnovers have plagued us against the press all year,” Wiersma said. “It’s been our achilles heel. We have one primary ball handler in Peyton Bugg. Emily (Glasscock) is a good wing, but when she’s got to handle the ball as much as she did it really hurts us on offense. It makes it hard for us to get in a play.”

“We had them in the single digits for a long time. Our defense is our ticket, but our defense is our offense,” Mason said. “When Lara’s shooting the ball the way she did tonight, we look pretty daggone good. We don’t have any All-Americans out there, but we look pretty good when we play together and I thought tonight together. Especially in that first half.”

Akers finished with a game-high 23 points — 21 of which came after the first.

“I don’t have to tell Lara to be aggressive. She’s a shooter and she’s going to shoot the ball,” Mason said of the junior. “You saw there at the end — a shooter’s going to shoot. The big thing is that Lara’s just now getting healthy and can elevate more on her shot and I think you could tell tonight. A lot of people think Lara’s just a three point shooter but she’s got as sweet a jump shot as any girl I’ve ever coached.”

As the season ends with a disappointing 8-22 record for Boyle County, coach Wiersma is still proud of what his team accomplished this year.

“They never stopped competing. The season didn’t go exactly as we planned; we didn’t get as many wins as we’d like,” he said. “But they helped change the culture of this program and get us headed in the right direction.”

Danville will play again on Friday night in the district championship game. They get the winner of Thursday night’s Lincoln County, Garrard County game. No matter who they square off against Friday, Mason’s plan is to focus on Danville.

“It doesn’t matter. We’re going to go shoot tomorrow and then come over and watch,” she said. “At this point, you’ve just got to play your game. The plays don’t make the game — the players do. It doesn’t matter what I call, the girls just have to put it in the basket.”

A structure fire involved a residence and outbuilding off of Goggin Lane at about 9 p.m. Saturday night. According to... read more