Bill could give Kentucky access to millions for battlefield preservation 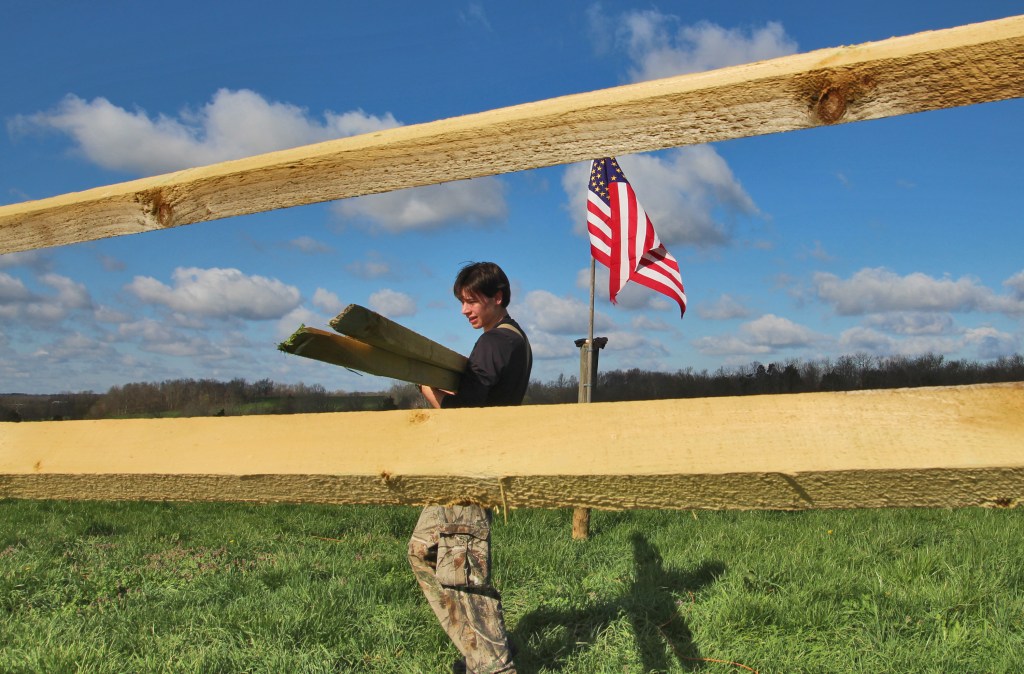 A volunteer carries lumber while new fences are constructed along a ridge at Perryville Battlefield State Historic Site in 2016. (File photo by Ben Kleppinger)

Kentucky could tap into millions of federal dollars available for preservation of historic battlefields and underground railroad sites through legislation sponsored by Rep. Daniel Elliott (R-Danville) that passed the House this week.

House Bill 319 would create the Kentucky Battlefield Preservation Fund, making it easier to protect important sites from the U.S. Civil War, the War of 1812, the Revolutionary War and Underground Railroad sites that are eligible for National Historic Landmark status.

While the bill wouldn’t put any money into the fund initially, Tom Bennett with the American Battlefield Trust said just having the fund in existence would give Kentucky access to money from the American Battlefield Protection Program (ABPP). The program is being funded at “record” levels by the federal government and other states already have funds and systems in place to tap into that funding, Bennett said.

“We’re trying to make sure that we get our hands on that money … our neighbor states to the south already have in place programs like this,” he said. “Tennessee and Virginia have been aggressive in preserving their military heritage.”

The new fund would accept budget appropriations from Kentucky, as well as donations from individuals or organizations and contributions from programs like the ABPP. The fund would be used to provide dollar-for-dollar matching grants to nonprofit organizations that want to purchase and protect land that is part of a historic site.

Bennett said for example, his organization has funding available to help purchase and preserve historic sites, but it can’t just go spend it all or it would run out. If the ABT can put its funds into the new preservation fund and have them matched dollar-for-dollar by the federal government, it doubles what the ABT can afford to preserve.

While the fund would potentially help with preservation of historic sites all across Kentucky, Bennett said there is a truly unique possibility for Perryville Battlefield in Boyle County that could get a big assist from HB 319: It could become the only 100% preserved battlefield site in the country.

With the ABT’s recent purchase of 128 acres known as the White Tract, Perryville Battlefield is already 90% protected, making it the most preserved Civil War battlefield in the U.S.

The other 10%, while not protected yet, is also not developed — it remains farmland today.

“We have within our grasp the ability to achieve 100%, which would make Perryville a one-of-a-kind place,” Bennett said.

What could such an achievement mean for Boyle County tourism?

“That’s up there with, ‘What now that Wilderness Trail is on the Bourbon Trail?'” said Jennifer Kirchner, executive director of the Danville-Boyle County Convention and Visitors Bureau. “These are monumental opportunities for us. And I think by getting that national recognition, in a lot of ways, it will catapult the park into marketing and exposure that it doesn’t have now.”

Making the case in Frankfort

Kirchner has been one of several locals from Boyle County working to get HB 319 passed.

“This is my first time being up there (in Frankfort) trying to pass a bill,” she said. “There’s a lot of different strategies and it’s really interesting … It’s all about relationships. There’s more work done in the hallways and talking to people.”

Kirchner said there has been debate and discussion over the years about the best way to increase funding for and make improvements to the Perryville Battlefield site, and it often comes down to whether the park should become part of the National Parks System, rather than remaining a state-run facility.

But going national is a lengthy process and “we need money now,” Kirchner said. “And by now, I mean in two years, not 10 years. So I think this has become a more immediate approach to secure funding.”

And it’s funding that doesn’t necessarily come with a price tag for Kentucky taxpayers, she noted — because of how it allows access to federal funds without a budget allocation from Kentucky.

“Essentially, we’re leaving money on the table (without the fund in place),” she said. “… There is money out there, but we have to get some legislation through to accept it.”

Joni House is another local person who has worked for the bill in Frankfort. She is a former manager of the Perryville Battlefield and works with the Friends of Perryville Battlefield organization. She’s also a member of the Kentucky Military History Preservation Alliance, and spoke in support of HB 319 on behalf of that organization when the bill passed out of committee in early February.

“Battlefield land is the rarest of all types of real estate in the commonwealth. It is the land upon which our young nation was forged into the great nation it has become,” House testified. “… Kentucky’s battlefields are located throughout the state and many are in rural areas. Visitors to these sites provide $10 million in spending annually to both the state and local communities.”

“Battlefield preservation is our duty to those who did not leave the field,” she said. “It is for them that I ask you to support House Bill 319. This is our best chance to honor those veterans for their sacrifice and preserve the land for our future generations.”

Bennett said there is a level of urgency to the issue — not just because others are already tapping the federal funds and Kentucky isn’t, but because historic land is lost to development on a regular basis.

The Kentucky House of Representatives passed HB 319 84-0 on Monday; it now must pass a Senate committee and three readings before the full Senate before it could land on Gov. Andy Beshear’s desk.

Bennett said he’s learned you never know exactly how things will play out in Frankfort.

“I wouldn’t begin to predict what could happen this legislative session,” he said. “But unless we’re there asking, we won’t be getting. … We’re trying to tell them this is important.”