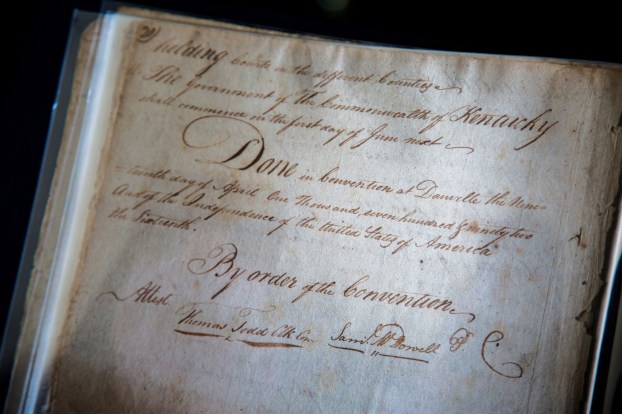 A page of Kentucky's original Constitution is displayed at the visitors center in Constitution Square Park in 2017. (File photo by Ben Kleppinger)

Boyle County has officially formed a “Birthplace of Kentucky” Committee to provide recommendations and insight on Constitution Square Park to local elected officials.

The committee’s seven members were introduced to the Boyle County Fiscal Court Tuesday morning. They are:

The committee will now begin meeting to come up with recommendations on how Boyle County might make changes or spend money to improve Constitution Square, which is the site where Kentucky’s original Constitution was drafted, earning it the title of “Birthplace of Kentucky.”

The committee was created as one way to address problems with maintenance and building usage in the park.

“The Birthplace of Kentucky Committee is engaged to protect, preserve and share the history and heritage of Constitution Square … The committee will strive to exceed the standards for preserving the stories and historical contributions of Constitution Square to the commonwealth and nation,” reads a draft vision statement provided by Boyle County Judge-Executive Howard Hunt. “They will seek continuous improvement in programs and services by carefully listening to the concerns and input of everyone on the team.”

The committee will be interacting directly with County Engineer Duane Campbell and Boyle County magistrates Tom Ellis and Jason Cullen as they develop recommendations.

Cullen said he hopes someone from the committee can report back to the fiscal court in about a month on its progress. 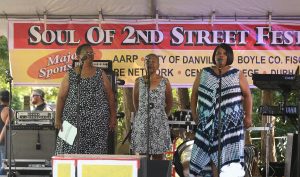 The Davis Sisters perform during the Soul of 2nd Second Street Festival on August 11, 2019. (File photo by John Scarpa)

Magistrate Jamey Gay said the name, “Birthplace of Kentucky Committee,” should not be construed to mean that the site’s 18th-century history is the only history that’s important.

“I think it’s important that we celebrate and acknowledge the history that has taken (place) on that site from beginning to present,” he said. “I don’t want to see us skip over all of the African American history and culture that took place on that site.”

Second Street in Danville, which runs along the west edge of the park, was home to a vibrant African American community in the mid-20th century, but many of the buildings were later demolished during so-called urban renewal efforts in the 1980s. Today, there is an annual Soul of 2nd Street Festival, held at Constitution Square, to celebrate what used to be there.

SO YOU KNOW  Visit 2020census.gov for more information. Census forms will not be available online until the week of March... read more