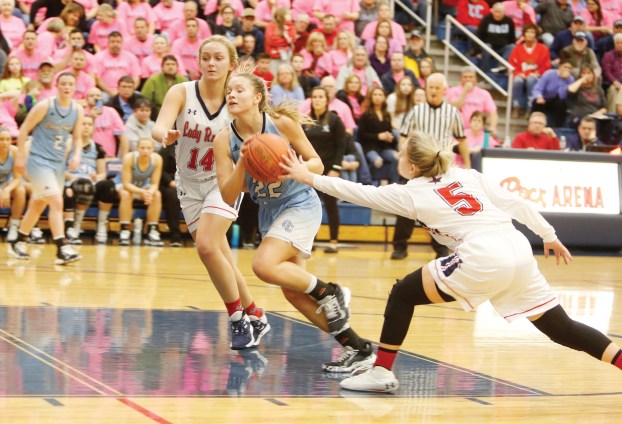 Gena Cravens (22) of Casey County tries to slip between Rockcastle County defenders Keelee King (14) and Shelby Newland (5) as she drives toward the basket during the fourth quarter of Casey’s 47-37 loss in the girls 47th District Tournament final Wednesday. (Photo Mike Marsee)

MOUNT VERNON – The Casey County girls’ performance was out of character in a game that got out of its control Wednesday night.

Casey came up short in what coach Tara Weddle called “the controllables” in the 47th District Tournament championship, getting outrebounded and frequently outhustled in a 47-37 loss to Rockcastle County that denied the Lady Rebels a third consecutive district title.

The result was the Lady Rebels’ lowest-scoring game of the season, one that will give them a less favorable seed in next week’s 12t Region Tournament and one that Weddle said should both educate and motivate them as they move on to the regional.

“I just think we need to refocus and not let this defeat us and just use it as motivation,” Weddle said.

Casey (24-7) will be paired against a district champion for the first round of the regional tourney Monday or Tuesday at Lincoln County, and Weddle said the Lady Rebels will have to do what they didn’t do Wednesday in a battle between two of the region’s top teams. Casey had won its two regular-season meetings with Rockcastle by 13 and 10 points, but the Lady Rockets flipped the script by outscoring the Lady Rebels 18-7 in the fourth quarter and 10-2 over the last three minutes.

“I told them that we wear the biggest target in the region on our backs this year, and teams come out and they’re ready to play and they want it. We have to handle that energy coming from other teams,” she said.

The fact that Rockcastle (24-7) appeared to want to make this a low-scoring game only served to magnify the plays Casey didn’t make.

“Every single call, every single possession, every single rebound, every single 50-50 ball, it makes a huge difference. Those are controllable factors that we just didn’t take care of tonight, and they did,” Weddle said.

Casey, which was averaging 63.7 points per game, scored fewer points than it had in any game over the last two seasons and suffered its first double-digit loss since a 63-51 loss to Clarkrange (Tenn.) Dec. 28 in a Florida tournament.

The Lady Rebels shot just 33 percent (12 for 36) from the field – more than 10 percentage points below their season average – and made only two of 12 shots in the fourth quarter.

“We don’t have very many low scoring games like this, and we haven’t been outrebounded by that much in a long time,” Weddle said.

Rockcastle took control of the game with a 13-2 run in which Casey went without a field goal for a span of 6:10. The Lady Rockets outscored the Lady Rebels 8-2 over the first 4:38 over the fourth quarter to take a 37-32 lead.

That negated the work Casey had done to overcome a first-half deficit. The Lady Rebels trailed 22-15 midway through the second quarter, but they held Rockcastle scoreless for 10:25 while they scored nine straight points to nose in front for the first time.

Jordyn Stephens, who scored a game-high 17 points for Casey, hit a layup off a Rockcastle turnover to give her team a 24-22 lead, and the Lady Rebels answered a Rockcastle basket with consecutive 3-point goals by Stephens and Gena Cravens to go up 30-24 with 1:16 left in the third period.

The Lady Rockets regained control quickly, however, behind Casey Coleman, who got free for three layups during their decisive run. Coleman led Rockcastle with 14 points.

A 3 by Cravens pulled Casey within 37-35 with 3:05 to play, but the Lady Rebels never got another shot at the lead. Shelby Newland, Lindsey Jones and Coleman combined to hit 10 of 10 free throws over the final 2:43 to help Rockcastle wrap up its first district title since its 2011 state championship season.

Casey, which reached the 12th Region final last season, remains one of the teams to beat in this year’s regional, even though its path through the bracket might be more difficult.

Weddle said refocusing will be a priority in practice in the days to come.

“I think we need to work on our focus and our mentality,” she said.

Lincoln grinds out win over Garrard

It wasn’t pretty, but it doesn’t need to be this time of year. Lincoln County got a 56-32 win over... read more