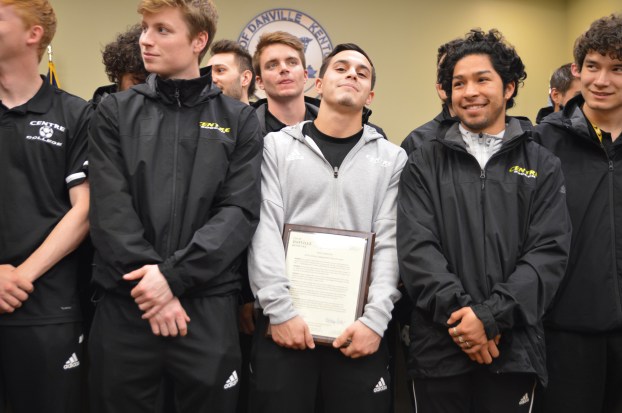 Senior Nick Mazzarella strikes a pose while holding the proclamation the Danville City Commission issued honoring Centre College's men's soccer team for an outstanding season. The team ended at 20-4-1, finishing the season with the highest ranking in the program's history. (Bobbie Curd photo)

The City of Danville issued a proclamation Monday honoring the Centre College men’s soccer team. The Colonels finished their season at 20-3-1 — the highest ranking in the program’s history. 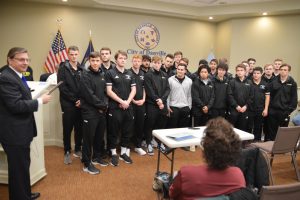 Team members filed down in front of the public meeting room in city hall and stood while Mayor Mike Perros read the proclamation.

The Colonels ended the regular season at 13-3-1; finished second in the Southern Athletic Association; then went on to play in the Final Four of the Division III NCAA tournament.

“The Centre College men’s soccer team players are outstanding role models to the youth of Danville and Boyle County; all members are applauded for their exemplary attitude and contributions, both on and off the field …” Perros read.  The proclamation reads that the team members and coach are “shining examples of focus and dedication to the best they can be as a team, coming together to accomplish great things …”

Perros handed the microphone to the team’s senior captain, Patrick Ferrell. “We just want to say thank you for being so supportive of us. Part of being at Centre College means being a real part of the Danville community, so we felt the full support of Danville and are really happy to be here,” he said. 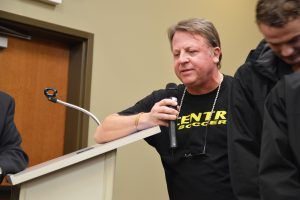 Centre College men’s soccer coach, Jeb Burch, says it was the leadership of the seniors on the team that “took us over the top” in the season. (Bobbie Curd photo)

Coach Jeb Burch said, “Obviously, a great team to coach. We had tremendous leadership,” and asked all the seniors to raise their hands. He named off seniors Ferrell, Tate Johnson, Nick Mazzarella, Jack Gaynor, Carson Hart, Kaeman Filiatraut and “the local” James Warinner. “Obviously a great group of seniors here, and really kind of took us over the top.”

On Tuesday, Danville got over the first hurdle on its way to returning to the 12th Region tournament with an... read more