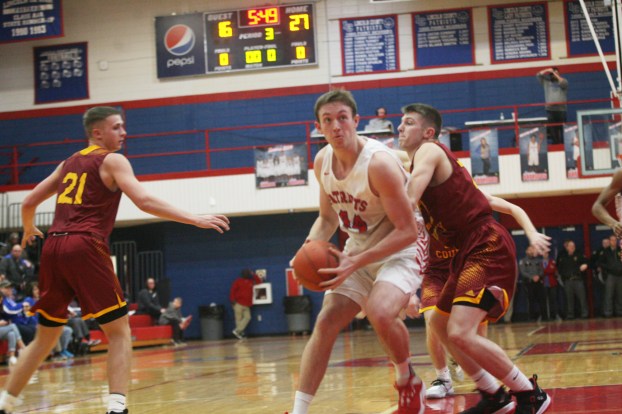 Riley Bodner had 12 points for Lincoln and dominated in the interior. (Photo Derek Brightwell)

Lincoln grinds out win over Garrard

It wasn’t pretty, but it doesn’t need to be this time of year.

Lincoln County got a 56-32 win over Garrard County to advance to the 45th District Championship game on Friday night and guarantees a trip to the regional tournament next week.

“We’re playing Friday night and we’ve put ourselves in a position to play in the region next week,” Lincoln County coach Jeff Jackson said. “That was the goal we set coming into this season — get to the district championship and go play in region… It wasn’t the prettiest thing but we’re playing on Friday.”

Neither team felt like they could get into a rhythm in the first quarter and it wasn’t until the final minute when Lincoln took its first lead — 11-10, the score at the end of the quarter — which it never relinquished.

The Patriots game plan was clear from the tip — don’t let Brayden Sebastian beat us.

“Brayden’s tremendous. He’s a tremendous player and a tremendous kid,” Jackson said. “He’s going to be very successful at Campbellsville. He’s a heck of a player — region player of the year for a reason. He’s really good. It’s been fun coaching against him but I’m glad he’s graduating.”

“Brayden’s been a special kid for us and I’m really sad that he wasn’t able to play in a regional tournament,” Garrard coach Ryan Young said. “That just goes to show the strength and the depth of this district on the boys side. He’s just been a great student-athlete.”

Despite being the focal point of the defense, Sebastian still finished with a game high 17 points.

Lincoln was led by Jaxon Smith and Baylon Mattingly who finished with 14 each, but it was Riley Bodner’s defense that helped a struggling Patriots team.

“Riley did some good things to contest shots, alter shots and got some blocks,” Jackson said of Bodner, who finished with 12 points as well. “His length makes it tough for kids when they get around the basket. He’s long and I thought he played pretty daggone well tonight. And he got a lot of rebounds and got our breaks started tonight as well.”

For Garrard, with the focus on Sebastian, eighth grader Montavin Quisenberry was tasked with running the offense for most of the game.

“It’s kind of passing the baton in a way,” Young said. “We didn’t expect going into the season that he was going to have to carry such a load. I think late in the year it took a toll on him, but you can tell tonight that he’s just a gamer. He made some tremendous finishes in the first quarter and it’s going to be exciting to watch him grow and develop with some of his natural skills and ability.”

Coach Young was emotional after the loss, which ended the season for Garrard at 10-19 and was the final game for the first senior class he coached all the way through.

“It’s always tough when it ends, but especially with this group. I wish we’d have had more time to play together as a unit with all the ins and outs,” he said. “With Brayden being out, it was like we were moving in fast forward in the second half of the year just to get some continuity. I told them I loved them and I was proud of them.”

Coach Jackson now has to turn his focus to Thursday night’s Boyle-Danville game — the winner of which will take on Lincoln on Friday.

Lincoln got the better of Boyle in both of their meetings this year, but split with Danville — each team winning on their home court.

“Two really good teams and they’ll have a battle in here tomorrow night,” he said. “We’ll be here watching and coming up with a plan for one of them.”

It had been a long time since Boyle County’s girls basketball team got a W. The last time it happened... read more